A proposal for new flight attendant uniforms on Turkish Airlines strikes some as too conservative, writes Tulin Daloglu. 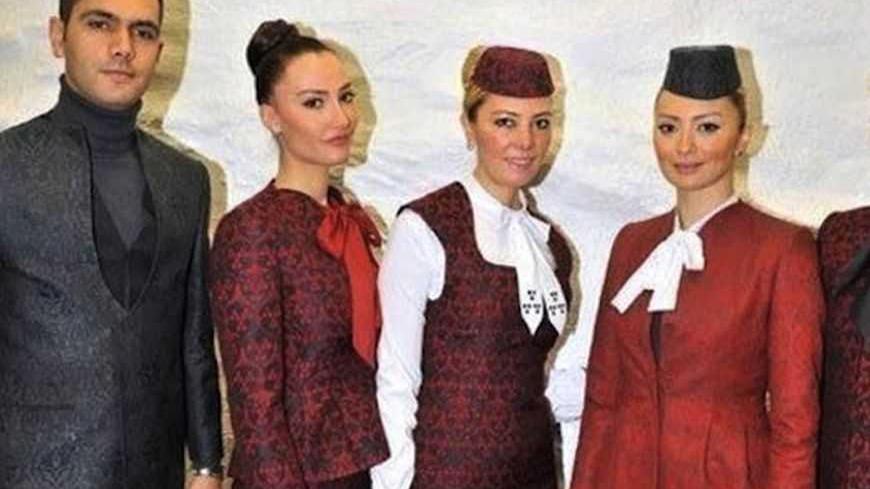 Turks on Twitter and Facebook have been circulating the leaked photograph above, which reportedly depicts Turkish Airways' proposed new uniforms for flight attendants. -

As a rising star, Turkey has two popular brand names. The first is the country’s prime minister, Recep Tayyip Erdogan, and the other is Turkish Airlines. Whether or not one is critical of the ruling party’s policies, Erdogan’s name has worldwide recognition, and he sets the image for present day Turkey — a conservative family man, a pious Muslim and married to a woman dressed under Islamic code and covered from head to toe. In fact, since the Erdogan government came to power over a decade ago, the spouses of nearly all cabinet members follow Emine Erdogan's dress code, as does the first lady, President Abdullah Gul’s wife.

But Turks reacted fiercely last week when they suddenly learned that Turkish Airlines planned to change its flight attendants' uniforms. Although it's unclear how the airline decided to give the job to Dilek Hanif, a well-known haute couture designer, Turks active on social media, including Facebook and Twitter, first focused their criticism on the selection process of the designer. She was publicly slandered by other famous Turkish designers and ordinary people on the street, but it remains unclear what expectations Turkish Airlines set for her. Turkish media reported that Hanif says the uniforms are not yet finalized, and that she has no clue how pictures were leaked to the social media.

Turks on social media complained that these supposedly new uniforms not only looked extremely conservative, but also were inefficient for food and drink service. People didn't like the fabric's dark colors and intense motifs. They criticized the skirts for falling too far below the knee, with thick black socks that don't show any skin. Many didn't like the big butterfly tie on the shirts over the vests. For the male flight attendants’ uniform, the criticism was no different. In essence, Turks argued that this outfit doesn't represent the clothing style of modern day Turkey.

Beauty is, of course, a subjective concept that varies from one person to another. For Erdogan, for example, his wife has beauty and elegance, as do the spouses of his cabinet members. I personally would never want to criticize a woman for what she wears — but this friction between Turkey's observant Muslims and secular masses remains a thorny issue, and with the uniform debate, it was on the verge of creating another social crisis in an already intensely polarized nation.

Last but not least, Turks specultated that Turkish Airways is dropping alcoholic-beverage service in its domestic and foreign flights. In a written statement released today [Feb. 13], Turkish Airways said it "serves alcoholic beverage only to its business class passengers in its domestic flights. In 20 out of 36 domestic flights, there is no business class." The statement also read that due to lack of demand, the airline serves alcoholic beverages only on the "Istanbul, Izmir, Antalya, Ankara, Bodrum and Dalaman" flights. On international flights, the alcoholic-beverage service has been cancelled on flights to eight countries following requests from those countries, the airline's statement said — including Iran, Iraq, Saudi Arabia, Senegal, Sudan, Egypt, Somali and Pakistan, all countries with majority Muslim populations.

Turks on social media have a simple, bold message: They care about the brand of "Turkish Airlines," and they don’t want to draw passenger attention to personnel’s uniforms which suggest that religion is a priority for the company. Also, they argue that Turkish Airlines shouldn't restrict alcoholic beverages on any of its flights.

This is all unfortunate news for such a global brand name. Temel Kotil, the general manager of Turkish Airlines, was quoted in Turkish media saying that the airline hasn't yet decided on the winning uniform, and that it will choose one with beauty and elegance. Let's hope that it will be — and that flying with Turkish Airlines will continue to be a privilege in every respect.