The Case for Israeli Censorship 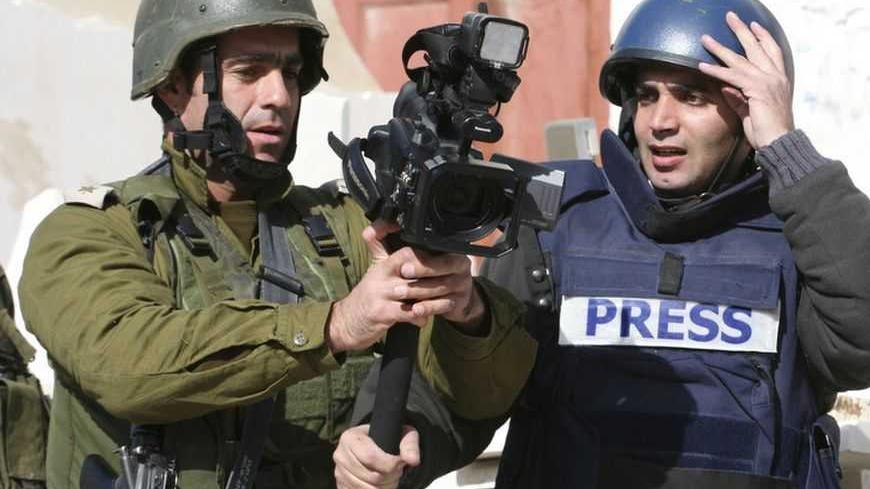 An Israeli army officer grabs a camera from Reuters cameraman Yusri al-Jamal as he prevents him from covering news events in the West Bank city of Hebron, Jan. 2, 2009. - REUTERS

The affair of “Prisoner X,” otherwise known as Israeli Mossad agent Ben Zygier, raises anew the issue of censorship, freedom of speech and media coverage in Israel. Well, I am not the bearer of glad tidings. Israel is not a dark place where authorities try to keep vital information from the public through military censorship. Having been posted by my newspaper in New York for four years, I can determine unequivocally that average Israeli newspaper consumers have no less vital information about the goings-on of their government and its military than their counterpart consumers in most Western countries — sometimes much more. Israel is a free country, with a penetrating and free media which taunts authorities no less than in most Western countries and in most cases — even much more so.

By the way, the media in Israel is in the throes of a fight for its life because authorities are trying to hurt it, to confine its movements, to control and silence it, but that is a different issue, totally unrelated to censorship. I shall touch upon it at the end of this article.

Yes, there’s military censorship in Israel, which did not play a central role in the Prisoner X affair. In this case, a court issued a gag order which was upheld by Israel’s Supreme Court, an independent, powerful entity, accepted by the entire world. The censor played only a minor part in this affair and the chief military censor, Brig. Gen. Sima Vaknin-Gil, thought that the sweeping gag order caused more harm than good. She also defended the Israeli lawmakers who stood up in the Knesset and violated the gag order (without knowing of its existence), and announced that in her view, they were doing their job and their duty. The authority of Israel’s censorship is very focused and is used sparingly in a measured and logical fashion.

The comparison between Israel and the free world in these contexts is undeserved. My friend Reuven Pedatzur writes that Israel is the only democracy which has military censorship and journalists are forbidden to publish news stories. Even if that is true (it’s not accurate because many other countries have laws and regulations that lead to the same results regarding state secrets), one must immediately add the following fact: Israel is the only democracy in the world that continues to fight for its existence.

It is the only democracy in the world whose enemies openly declare their desire for its annihilation, and even act in order to achieve this mission on a daily basis. It is the only democracy which still has no borders, and perhaps that’s for the best, because the Green Line, for example, which is Israel’s recognized international border separating it from Judea and Samaria, is only 13 kilometers [about 9 miles] away from the Mediterranean in the region of Netanya [a coastal town north of Tel Aviv]. Imagine a nine-mile wide United States, at the height of the Cold War, with the Soviet Union around the corner, not across the ocean. A Cub Scout troop could cross this space and divide the Jewish state into two with only a slight effort.

Israel is dealing with Iran’s effort to obtain nuclear capabilities, with powerful terror bases armed with thousands of missiles and rockets on its southern border fence and its northern fence, surrounded by a burning Middle East. Therefore, premature leakage of a sensitive, operational security secret could result in unbearable results for Israel. Twelve years ago the United States was rocked, and the whole world was shocked, by the terror attack on the Twin Towers and other additional sites in the country, an attack in which more than 3,000 Americans were murdered. At the exact same time, a similar wave of terror landed on Israel, resulting in the deaths of some 1,000 Israelis. Compared to the size of the population, 1,000 dead Israelis are equivalent to 30,000 Americans, ten times the number killed on Sept. 11. And in other words: such attacks endanger the very existence of the Jewish state and could undermine the prospects of its survival in its wild and hostile habitat. The United States and Europe have not come face-to-face with such a threat for many decades.

And still, I cannot recall any Israeli journalist serving time for censorship violations. Usually, bearable monetary fines are imposed over such violations, and what’s more, journalists have recourse to an effective appeals process against a decision by the military censor, which can even reach the Supreme Court.

By the way, this has not always been the case. In earlier times, Israeli censors held too much unnecessary power. But those days are long gone. Censorship continues under emergency defense regulations passed at the time (1945) by the British mandate, but its wings have been clipped with its consent and its field of operation has been precisely defined: Military censorship is allowed to prevent publication only if the item poses a clear and present danger to the security of the state, to lives or to foreign relations. The chief military censor has absolute authority, she does not answer to anyone, she has access to all the intelligence organizations and defense arms and she explains her decisions. As mentioned, these decisions are subject to appeal. As long as permanent peace has not erupted in the Middle East, we shall probably have to keep living with censorship, which is a necessary evil, completely understood by Israeli citizens seeking peace and security.

And what about the argument that in an open world, with free and vibrant Internet for all, there’s no point in censorship? This argument, too, is irrelevant. The censor does not suppress reports from abroad. Such reports do not carry the same weight as those published by Israeli journalists close to the defense authorities and political leadership. Thus, for example, the entire world can publish the number of nuclear warheads held by Israel (about 200, according to foreign reports), the number of Jericho missiles attributed to it, etc., etc. But if Israel itself confirms these data, it will open itself up to an international demilitarization assault. The nuclear ambiguity maintained by Israel is a rational policy, adopted in concert with the United States, enabling the country to have it both ways. Not every godforsaken blog requires a response or censorship. The eyes of Israel’s enemies are directed toward the Israeli media. This and more: Most censorship deletions are meant to protect fighters, agents, real-time operations which if exposed could cause immediate and lethal damage.

There isn’t a single Israeli who does not understand the censorship suppression at the height of negotiations with Hamas over freedom for Gilad Shalit, the Israeli soldier held captive for 5 years, for example. Irresponsible reporting at the critical stages of such negotiations could have torpedoed them, and this has happened in the past. And there’s not a single Israeli who does not understand censorship policy regarding the 2007 attack on the Syrian reactor at Dir a-Zur. Yes, the whole world can attribute this attack to Israel, but if Israel itself takes responsibility, the degraded, defeated Syrian president will be forced to retaliate. As long as the opacity is maintained, Assad, too, can ignore events. By the way, this policy has proven itself beyond the shadow of a doubt.

And if you ask what about the latest attack on the convoy of anti-aircraft missiles moving from Syria to Lebanon, here, too, one can absolutely understand the censorship, even though the attack was reported around the world and attributed to Israel. There’s no reason to voluntarily supply Hezbollah Secretary Gen. Hassan Nasrallah and the multitude of terrorist groups and world jihadist elements hovering over the mass destruction arsenals amassed by the Assad family, with an excuse to hurl some of these weapons at Israel.

But here we get to the comical part: in the midst of the Israeli media muzzling, the honorable Israeli Defense Minister Ehud Barak appeared, in the flesh, at a publicized event in Europe and openly admitted that Israel was the one who carried out the attack. By the way, at the time, Benjamin Netanyahu himself, as head of the opposition, rushed to a television studio and in his own voice hinted at the identity of the anonymous attacker of the nuclear reactor at Dir a-Zur. This is the soft spot of Israeli censorship: the babbling syndrome of its leaders. The chief censor is powerless to stop them and the only thing she can do is pray.

So why has Israel deteriorated in the international rating of press freedoms? Not because of censorship.

First of all, because there are too many areas within our purview which are inaccessible, mainly the Gaza Strip. Secondly, and much more importantly, this is what the regime of Netanyahu has been trying to do to the free press in Israel during his entire former term: to kill it, to silence it, to impose control over it, to limit its scope. The printed media is under a powerful attack by an external force that brainwashes the public using a pro-Netanyahu mouthpiece with limitless budgets delivered for free directly to people’s homes. The public radio and television networks have undergone a hostile takeover by especially aggressive government representatives. The IDF’s radio station, which was one of the freest places in Israel, has been brought to its knees and its freedom has been curtailed. And the commercial television stations, too, are under heavy regulatory pressure which almost resulted in the closure of Channel 10, one of the leading critics of Benjamin Netanyahu and his wife, Sara. These are the real problems of Israel’s media.