Censorship in Turkey is on the rise, raising questions about the state of Turkish democracy, writes Sibel Utku Bila. 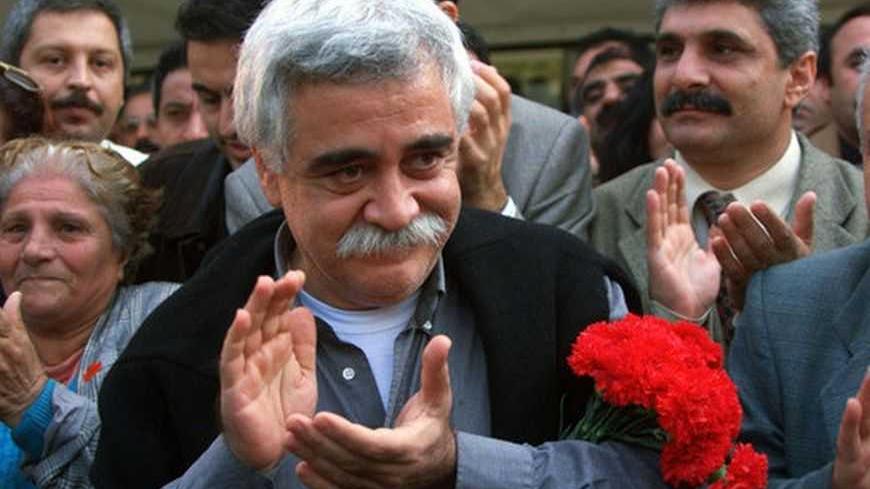 Turkey's best-loved impersonator satirist Levent Kirca holds a bouquet of carnations as he is greeted by supporters at the start of a hunger strike in Istanbul on Nov. 3. Comedian Kirca began a hunger strike in protest at a TV watchdog's "censorship" of a channel that broadcast an episode of his show. - REUTERS

ANKARA — The zeal of Turkish censorship seems to know no limits. It has recently set a new landmark with a bid to censor John Steinbeck’s classic, "Of Mice and Men," on grounds of “immorality.” The controversy raised fresh misgivings over freedom of expression in Turkey, landing the American author in a crowded club of victims, ranging from Chuck Palahniuk and John Lennon to The Simpsons and Piglet.

Steinbeck’s books have been challenged many times by conservatives in the United States as well, but in Turkey — a country where dozens of journalists languish in jail and whose premier believes that “some books are more destructive than bombs” — the stakes are much higher.

The Islamist-rooted Justice and Development Party (AKP), in power since 2002, claims to have made Turkey an “advanced democracy.” In recent years, though, there have been increasing signs that this type of democracy is meant largely for those who sign up to the government’s policies and Islamic worldview. For the rest, Prime Minister Recep Tayyip Erdogan has almost daily tirades to deliver. His anger has boiled over, among others, over a sculpture not to his liking, a rock festival that offered beer to university students, and a soap opera chronicling lustful intrigues in an Ottoman harem. The premier’s outbursts are not without consequences: The “freakish” sculpture has been demolished, the rock festival has gone dry and the fictional sultan’s household has started praying.

Following in Erdogan’s steps, Turkey’s broadcasting watchdog is harsh on “offenders.” Last month, it slapped a $30,000 fine on a private television channel for insulting religious values over an episode of "The Simpsons," in which God was shown taking orders from the devil.

For many, the attempt to censor parts of "Of Mice and Men" came as a chilling indication of how the conservative climate nourished by the authorities is taking root and emboldening self-styled moralists. It was a group of teachers, members of an education commission in the western city of Izmir, who asked their ministry to censor passages where Whit speaks — in quite innocent terms — about his favorite brothel. “I’ve never read the book. I [only] read the section in question. I don’t think the subject discussed there is something of importance that a young person should know,” Izmir’s education director Vefa Bardakci was quoted as saying last week.

Simultaneously, the press reported that a teacher in Istanbul was risking disciplinary sanctions for giving students homework from "My Sweet Orange Tree," by Brazilian writer Jose Mauro de Vasconcelos. The complainer this time was a parent who believed the child protagonist Zeze used obscene language.

Ironically, both books have been on the education ministry’s list of recommended literature for decades. The Turkish Publishers Union condemned the incidents as “a striking and shameful sign of how far the censorship mentality in our country has gone.” Steinbeck’s Turkish publisher, Sel, expressed dismay that literature teachers were requesting the censorship. “This suggests that anyone’s obscure and subjective criteria of morality could from now on lead to the prosecution, censoring or banning of any book or film, even if they have become universal heritage,” it said.

Sel’s fears are not unfounded. Last year, two of its staff — a manager and a translator — stood trial on charges of disseminating obscenity after it published William Burroughs’ "Soft Machine." Another publishing house, Ayrinti, was taken to court on similar charges for printing Chuck Palahniuk’s "Snuff." The defendants eventually escaped without sentences on the condition they not repeat the same “offenses” within three years.

The uproar over the two school incidents forced Education Minister Omer Celik on the defensive. He asserted that neither book would be censored or removed from the ministry’s recommendation list. “The books are there to be read, not to be investigated,” he said on Jan. 9.

Many however remain unconvinced and believe that the controversy is only a by-product of bigger issues. “A profound transformation is under way in the education system. The ultimate objective is to install a system that will cater to their [AKP’s] ideology of moderate Islam,” said a pedagogue, who until recently worked at an education ministry department that approved school books. He said he lost his post along with dozens of colleagues as part of a massive “purge” aimed at transferring key offices to AKP cronies. “We used to have absurd arguments with the newcomers. One of them, for instance, insisted on removing a reproduction of Delacroix’s 'Liberty Leading the People' from a textbook on human rights. He argued the painting depicted a ‘naked woman’ and was obscene,” said the pedagogue, who asked not to be named.

Such fears are on the rise among secular Turks, stoked by Erdogan’s declaration that his government will raise a “pious generation.” Shortly after he made the statement last year, the AKP bulldozed through parliament a fiercely disputed bill that introduced the Quran and the life of the Prophet Mohammed as elective courses in public schools. The AKP argues that it is only returning Turks their right to religious education, which, it says, had been suppressed by the secular system.

The row over Steinbeck’s book overshadowed a reform, though largely symbolic, that the government had hoped would boost its democratic credentials. Under a newly enacted law, thousands of publications banned over the decades in Turkey became legal in the first week of January. They included a wide range of titles — from the Communist teachings of Marx and Lenin to the writings of jailed Kurdish rebel leader Abdullah Ocalan. Many of them, like the works of iconic Turkish poet Nazim Hikmet, had already been widely available in bookstores as the restrictions were not fully enforced in practice.

But censorship comes in many forms in Turkey and often needs no law to thrive on. Like several years ago, when public broadcaster TRT chose not to include "Winnie the Pooh" in a major purchase of Disney cartoons because one of its main heroes, Piglet, was an animal deemed unclean in Islam. Or more recently, when a TRT presenter narrating the closing ceremony of the 2012 London Olympics omitted John Lennon’s appeal for “no religion” when he translated the lyrics of "Imagine," one of the songs featured in the show.

It remains to be seen whether the latest reform will inspire a higher degree of tolerance for freedom of thought and expression, or whether Turks will continue their march towards a true democracy in the style of Ottoman military bands — two steps forward, one step back.

Sibel Utku Bila is a freelance journalist based in Ankara, who has covered Turkey for 15 years. She was a correspondent for Agence France-Presse (AFP) from 1999 to 2011, and articles she wrote during that period have been published in many newspapers around the world.

by Murielle KASPRZAK and Joseph SCHMID | AFP | May 26, 2022
END_OF_DOCUMENT_TOKEN_TO_BE_REPLACED