Parents Get on Board With Turkey's LGBT Movement

A new documentary reveals that parents of lesbian, gay, bisexual and transgender (LGBT) individuals in Turkey are speaking out for the first time in support of their children, marking a new milestone for the movement in the country, writes Sibel Utku Bila. 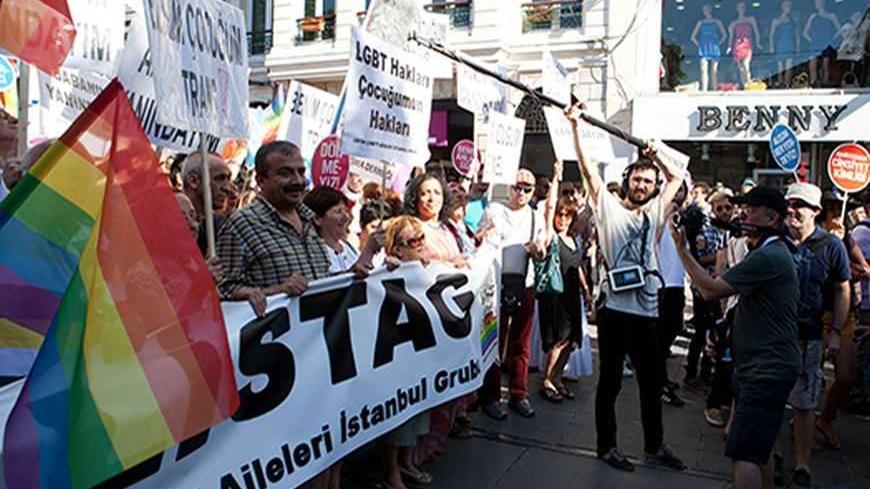 A production still from the set of the movie "My Child." - Erkin On

ANKARA — In Turkey, the word “family” often carries coded messages. A “good family girl,” for instance, denotes a virgin, and a “family restaurant” usually means one with no alcohol on the menu. Director Can Candan has now made what he calls a “family film.” But far from catering to taboos, his documentary breaks one: Parents of lesbian, gay, bisexual and transgender (LGBT) individuals in Turkey are speaking out for the first time in support of their children, marking a new milestone for the movement in the country.

Unlike other Muslim nations, Turkey has never criminalized same-sex relationships, and the LGBT struggle has grown increasingly organized and outspoken in recent years. But homophobia remains widespread, and die-hard patriarchal norms further raise the cost of coming out. For many it still means banishment; for others, death at the hands of relatives “cleansing family honor.” Transvestite sex workers bear the brunt of social stigmas, routinely harassed by police and often the victims of gruesome hate murders.

The documentary, "My Child," chronicles the “coming out” of a group of parents who went through years of torment and soul-searching to join hands and line up behind their ostracized children. Shattering stereotypes in the Turkish mind, the film sends out a powerful message that the LGBT person is not just the flamboyant drag queen on TV or the transvestite working the streets, but more often than not the kid next door. Humble women and men, their faces wrinkled and voices trembling, gaze straight into the camera as they recount how they overcame denial and shame to re-learn parenthood and embrace their offspring. The final scene shows bewildered onlookers as the parents make a debut at a Pride March in Istanbul brandishing banners that read “My child is homosexual” or “My child is transsexual.”

“It’s a family revolution. No conservative pressure can now stop this movement,” Murat Akay, one of the parents featured in the documentary, told Al-Monitor in Ankara.

The retired television producer is an extraordinary Turkish father, even by the standards of the brave souls speaking out in the film. While other fathers trailed behind mothers on the way to acceptance, Akay took the lead. His eyes well up with tears as he remembers the day several years ago when he took his teenager — a female-to-male-transsexual — to a nascent transgender association in Ankara to “see he was not a freak” and meet with peers.

“They embraced each other like long-lost friends and burst into tears. It was a moment that never stops haunting me,” he said.

Akay Junior is now a university student living openly as a man and counting down the days to his gender-reassignment surgery.

Pinar Ozer's world was crushed by a single sentence her teenage son uttered one day: “Mom, I’m actually a girl.” It took Ozer two dramatic years to transform herself from a frantic woman spending fortunes to cure a “schizoid” son to a mom teaching a “newborn” 16-year-old daughter to wear a bra and makeup.

Today, Ozer is among the most vocal members of LISTAG, the Istanbul-based parents group which inspired the film.

“I don’t give a damn what people say. I’ll continue to speak out. It’s my child!” she told Al-Monitor.

Beaming with pride, Akay and Ozer joined other parents onstage at an Ankara movie theater this week as the film’s debut in the capital ended in loud ovations by a motley audience — from parliament members to transvestite sex workers.

“You are the bravest people in the world. This film should be screened in parliament, too. I promise to do my best for this to happen,” opposition lawmaker Binnaz Toprak told the parents.

The conservative climate nourished by the ruling Islamist-rooted Justice and Development Party (AKP) has been of no help to the LGBT cause. In 2010, the then-family minister sparked an uproar when she described homosexuality as “a disease that needs to be cured.” At a parliamentary commission drafting a new constitution for Turkey, AKP lawmakers voted down proposals to ban discrimination “on the basis of sexual orientation” — a provision that Turkish law currently lacks. Some members have reportedly argued that ordinary people would mistake such a clause as a legal protection for “perversion.”

Ordinary people, though, have long taken the law in their own hands to punish the “perverts.” Around this time last year, another film was making the headlines in Turkey with the gloomy tagline “Honesty may kill.” The movie, "Zenne Dancer," drew on the true story of university student Ahmet Yildiz, who was shot dead in 2008 by his father in Turkey’s first publicly acknowledged “gay honor killing.” In an article he wrote for a gay magazine shortly before his death, Yildiz had voiced regret for having come out to his deeply conservative clan, but still hoped that “time will heal everything.” The family, however, disowned their son even in death, refusing to even claim his body. Five years on, his wealthy father remains on the run.

Last summer, 17-year-old R.C. became the latest known victim of a “gay honor killing.” Pierced by 14 bullets, his body was found in a roadside ditch in Diyarbakir, in the mainly Kurdish southeast. His father and two uncles have since gone on trial over the murder.

The tragic end of the boy, however, demonstrated that LGBT activism is now spreading — though timidly — even to the most conservative corners. The murder was publicized thanks to the efforts of Hebun, a fledgling LGBT group in Diyarbakir, whose members stay mostly anonymous and wage their campaign online, backed by the major groups in western Turkey.

The activist parents, too, are already reaching out to conservative backwaters, resolved to debunk critics who downplay them as a bunch of well-off urbanites, free from the strong social codes of rural clans. LISTAG members are now running a help-line and encouraging peers outside Istanbul to organize. Recently they paid a delicate visit to the home of the slain Diyarbakir boy, where the issue remains a taboo.

“We tried to explain to the mother that homosexuality is not a disease. She replied her son was a good boy who believed in Allah. Then, just as we were leaving, the boy’s sister blurted: ‘Whatever he was, he was a brave boy. He showed openly what he was,’” LISTAG mom Gunseli Dum told Al-Monitor.

Akay, for his part, recounted how two unlikely visitors from a remote shantytown — the mother and grandmother of a gay teenager — turned up recently at their parents group in Ankara.

“Both were illiterate and wore the [Islamic] headscarf. They arrived weeping: Why is Allah punishing them? After several meetings, though, they began to accept that neither was their boy sick, nor they had been punished for a sin,” he said.

The parents are optimistic that the documentary, screened in 30 cities as part of an independent film festival, has boosted their cause.

“Our phone keeps buzzing all the time. People are calling even from Batman and Viransehir,” Dum said, referring to some of Turkey’s most socially closed regions. “Many call in the throes of remorse, having realized how much they have mistreated their children.”

For Ali Erol, a pioneer of the LGBT movement in Turkey, the arrival of parents to the scene is a precious award for a struggle launched two decades ago by a handful of gay activists.

“Back then, we had to either abandon our families or conceal ourselves,” Erol said. “Those parents now prove that our efforts are paying off, that families have come to recognize that not we, but they are the ones who need to change.”