Two court cases of "gay honor killings" in Turkey reveal a similar pattern of deep-rooted prejudice and social codes that override even the closest family bonds. 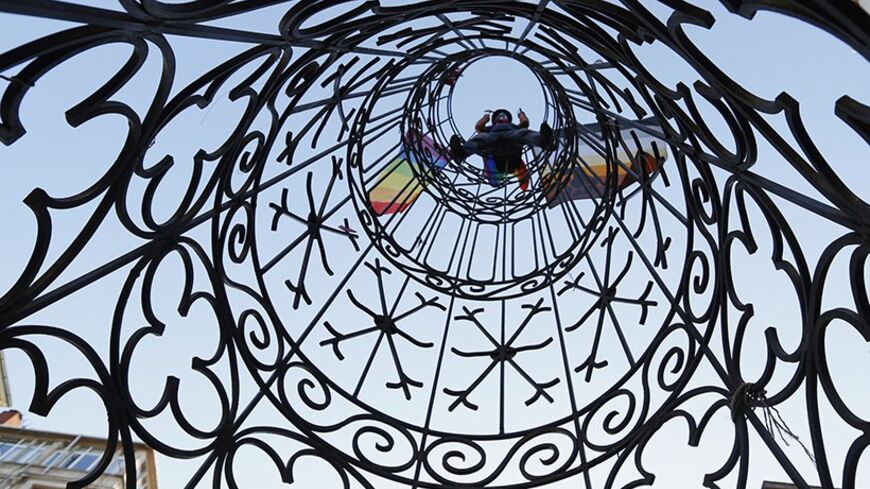 A gay rights activist waves a rainbow flag during a protest at Tunel Square in Istanbul, June 23, 2013. - REUTERS/Marko Djurica

Two months ago, the Bar Association in Diyarbakir, the largest city of Turkey’s mainly Kurdish southeast, received an application from an underage boy, who, on the advice of friends, sought refuge with the institution.

The teenager, whose name is withheld due to his receiving death threats, wrote along the following lines: “I was beaten by family members after they learned I was homosexual. After the beating, my father held a gun to my head, put a Quran in my hands and told me to repent. I somehow managed to run away the following day. My family stormed the homes of my friends and battered them, too. I have nowhere to take refuge. My life is in danger.”

Accompanied by lawyers, the teenager lodged complaints with the police and the prosecutor’s office. Given the severity of the situation, he was placed in a child care institution in another city, with no information relayed to his family. He will stay there until he turns 18 and then finds a way to look after himself.

The teenager’s story is heartbreaking, but he could still be considered lucky — for now — as many homosexuals in Turkey perish at the hands of their own relatives in “honor killings.”

Turkey became acquainted with the term “gay honor killing” in 2008 when The Independent used the expression in a report on the murder of Ahmet Yildiz, 26. Thereafter, Yildiz’s murder came to be known as the first gay honor killing in Turkey. Yet, families are believed to have played a role in such murders even before the term was coined.

Yildiz was the only son of a wealthy, pious family from Urfa. He lived with his boyfriend in Istanbul, where he was a university student. When he began receiving threats from his family after they learned of his homosexuality, he lodged a criminal complaint and asked for protection. The prosecutor’s office, however, not only failed to meet his request for protection but launched no investigation at all.

Yildiz’s murder was foretold. On July 15, 2008, only three months after he lodged the complaint, three bullets pierced his flesh as he went out to buy ice cream from a cafe in Istanbul’s Uskudar district. The family sought no legal action over the murder, and a court case was opened only upon the complaint of a woman who was injured in the attack. Witness testimonies depicted the assailant as the victim’s father, Yahya Yildiz, but the police could not track him down, as he had already fled abroad.

It took years for an Istanbul court to heed the persistent requests of lawyers and ask Interpol to issue a search bulletin for Yahya. Six years later, the man remains on the run, believed to be either in Russia or Ukraine, where he had business connections. The last hearing in the case on April 29 was postponed until July on the grounds that the suspect was still missing.

The victim's lawyer, Firat Soyle, believes that Yahya is keeping contact with his family and can be tracked down if the communications of family members are monitored. The court has rejected such a request in 17 hearings, deadlocking Turkey’s first gay honor killing case.

Another gay honor killing claimed the life of Rosin Cicek, 17, murdered in a gruesome fashion in July 2012. His father and two uncles battered the teenager, fired 14 bullets in his head and body before dumping him on a roadside near Diyarbakir. The body was found two days later.

Cicek’s father and two uncles were immediately arrested. Even though the suspects denied the accusations, the Diyarbakir prosecutor’s office charged them with murder committed “with motives of hatred over the victim’s sexual orientation.” On Feb. 10, a court in the city sentenced all three suspects to life in prison. The father’s sentence was aggravated with no chance to parole.

In both murders, the families disowned the legal process. In the Yildiz case, the relatives, including the victim’s mother, shunned the court hearings and denied information on the whereabouts of the father, the alleged murderer. In the Cicek case, the victim’s mother and siblings attended the hearings but claimed the boy’s death was an accident unrelated to his father and uncles, and even physically attacked LGBT activists who wanted to attend the trial. This type of behavior could suggest that the families condone the murders, seeing them as a normal response. Yet, it should be noted that they are under huge social pressure.

Ahmet Yildiz and Rosin Cicek were both from cities in southeastern Turkey, where prejudice against homosexuals has been on the rise in recent years under the impact of political factors. For instance, the Huda-Par Party — the offshoot of Turkish Hezbollah, an outlawed Islamist group unrelated to its Lebanese namesake — targeted homosexuals in a press statement in October 2013: "If they try to promote mental disorders and perverted behavior among Kurds as freedoms, they will pay the price." Such political attitudes targeting homosexuals directly are widespread in the region.

The LGBT community is seriously worried. LGBT advocacy groups closely followed the two trials and sought to become intervening parties in the proceedings. The courts rejected their requests.

In comments to Al-Monitor, attorney Soyle, who was involved in both cases, explained why LGBT participation in the court proceedings was important. “LGBT individuals are both upset and fearful over the murders. They know the same may happen to them. People who kill their own children can easily kill others of the same sexual identity. If courts grant them [LGBT activists] intervening party status, this could have a deterrence effect,” he said.

Soyle complained of the judiciary’s stance on the murder of homosexuals. “The courts themselves create discrimination, they lack sensibility in the criminal cases. People who wish to follow the trials are seen as Martians,” he said.

“The draft law on hate crimes submitted to parliament should be passed as soon as possible, the term "sexual orientation" should be added to the constitutional article on equality and the laws should ensure that courts and public servants take the issue seriously,” he added.

Increasing the punishments for perpetrators is the first measure that comes to mind for stopping gay honor killings or hate crimes against homosexuals in general. Yet, the deterrence effect of heavier sentences is a contentious issue. What really matters is eradicating the motivation that leads the perpetrators to kill.