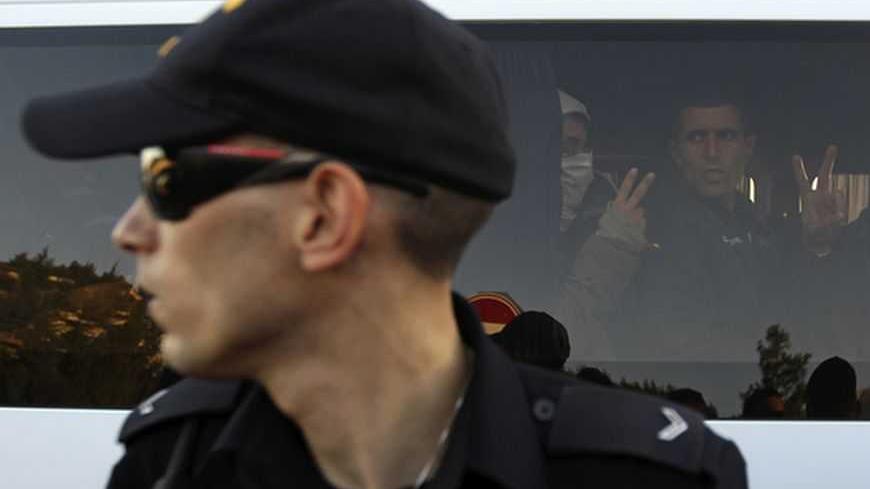 An Israeli police officer stands in front of Palestinian and foreign protesters gesturing from inside a vehicle after they were detained in an area known as "E1," which connects the two parts of the Israeli-occupied West Bank outside Arab suburbs of East Jerusalem, Jan. 15, 2013. - REUTERS/Ammar Awad

On March 20, Barack Obama will make his first visit to Israel and the occupied Palestinian territories as president of the United States. He has been in this part of the world before, but in the capacity of a junior senator from Illinois. Just days after this major announcement from the White House, Israel divulged that it is approving hundreds of new settlement units in the West Bank, signaling once more its intent to change the geographical status quo (and thus the political landscape), which would affect the outcome of any future status agreement with the Palestinians.

Israel’s Defense Ministry rubber-stamped construction plans for 346 units in the settlements of Tekoa and Nokdim south of the West Bank. Additionally, 90 new units were slated to be built in the settlement of Beit El, just outside of Ramallah.

For the Palestinian Authority (PA) and others who believe that a two-state solution is still possible, the prospect of another wave of settlements threatens to torpedo prospects to bring the two back to the negotiating table. Direct talks between Israel and the Palestinians have been on hold since 2010.

Just as important, this settlement announcement reveals that there is very little land not laced with illegal colonies left in the West Bank to negotiate over. Terrestrial Jerusalem, an Israeli non-government organization headed by settlement expert Daniel Seidemann, points out that “2013 has witnessed a settlement surge unprecedented in scope and intensity since 1967. Not a mere tactical move, this surge constitutes a strategic thrust to unilaterally determine a baseline border between Israel and Palestine.”

Palestinian frustration is at an all-time high, their pessimism fueled by the countless hail-Mary peace plans that have proved fruitless over countless years. The inaction of the international community has also paved the way for Prime Minister Benjamin Netanyahu’s government to forge ahead with settlement building in and around Jerusalem. Under Netanyahu’s watchful eye, plans were announced to build in an area known as E1, which would complete a finger of settlements around the holy city. This was part of an 11,000-unit plan given approval in just one week, as many units as were approved in the last nine years combined.

To add insult to injury, the Jerusalem Post has, for some weeks now, been running an ad titled “A Dream Come True” that promotes two settlements in the heart of East Jerusalem. Sabri Saidam, an advisor to PA President Mahmoud Abbas, responded to the ad in an op-ed in the same Israeli daily, saying Beit Orot and Ma’alot David are part of a series of settlements that isolate the Old City from the rest of East Jerusalem. The settlement ring extends from Sheikh Jarrah to Silwan, where plans are underway to demolish Palestinian homes to make room for an Israeli national park.

“What is most worrying is that the mere fact that the Jerusalem Post agreed to place the advert reflects how normalized the presence of Israeli settlements currently is for Israeli society,” Saidam wrote on Feb. 14.

The unusual briskness with which the E1 parcel of settlements was approved late 2012 shows that the Israeli government is bent on transforming the West Bank into one expansive Jewish settlement that leaves practically no room for a Palestinian state. Indeed, the temerity of giving the go-ahead for more units just days before the visit of of Israel’s closest ally would have marked a watershed moment, were it not for the fact that Israel had already pushed ahead with its own plans irrespective of American calls for a settlement freeze. The international community has also proven capable of nothing more than lip service and in his several years as Middle East peace envoy, Tony Blair — heading the Quartet — achieved very little to speak of.

The Obama administration may have made it easier for Israel to get away with one more settlement plan by saying that the March visit is a bid “to reaffirm the deep and enduring bonds between the United States and Israel,” as White House spokesman Jay Carney noted last week. Palestinian officials have voiced frustration that Obama will not come bearing a peace plan and will instead focus on the Iranian nuclear issue.

Speaking to Israel Radio early February, outgoing Deputy Prime Minister Dan Meridor, (Likud) said, “There is a discrepancy between our claim that we are willing to accept a two-state solution and the fact that we don’t limit the construction in the settlements to the settlement blocks.” However, he added the following telling warning: “I’m not saying we should stop construction in Jerusalem and in the settlement blocks, but we must not build beyond them, because by doing so we promote a very dangerous situation to Zionism, of one state from the Mediterranean Sea to the Jordan River, which endangers us more than anything else.”

In the meantime, Obama is expected to receive Israel’s Presidential Medal of Distinction, an honor bestowed for the first time upon a US president. But aside from American calls to cease settlement building, Washington has continued to support Israel, as evident throughout its November Gaza war. And despite some pundits’ fretting that the relationship between the two countries is rocky, Obama reaffirmed in his State of the Union address last week that his message throughout his Middle East visit would show that the US “will stand steadfast with Israel in pursuit of security and a lasting peace.”

On the ground, at least for Palestinians, this means more of the same: Israel continuing to pepper the West Bank with settlements, rendering the status quo (and with it the idea of statehood) untenable.