Israel Wants PA to Crack Down On Protests Over Prisoners

Israeli media have reported that Israel is ready to release $100 million it collects on behalf of the Palestinian government in return for the Ramallah leadership cracking down on the protests, reports Daoud Kuttab. 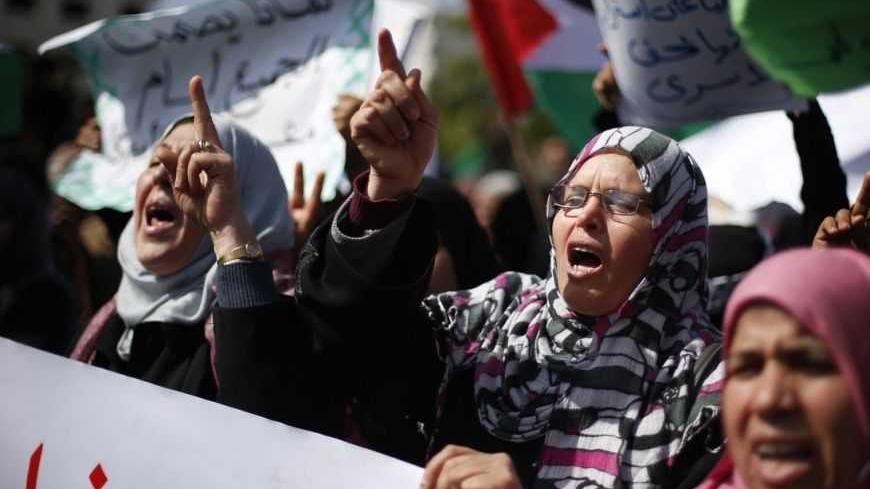 Palestinian women take part in a protest against the death of a Palestinian detainee in an Israeli jail, in Gaza City, Feb. 24, 2013. - REUTERS/Suhaib Salem

For the second time in a year, the suffering of Palestinian prisoners has touched the consciousness of Palestinians and has put the Israelis in a corner.

While Palestinian politicians have been talking about a reconciliation that is spinning its wheels, or about what to say to Barack Obama, the real story is taking place behind Israeli prison bars. Last February, Khader Adnan ended a 66-day hunger strike with a partial promise that administrative detentions would end. They haven’t and as a result prisoners and their supporters are again protesting.

Like the previous campaign, the current protests are focused on the heroism of a single prisoner Samer Issawi. This East Jerusalem native has been on and off hunger strikes for over 200 days. Pictures of the once well built man now a near skeleton of a man being brought to court on a wheel chair have triggered protests throughout the state of Palestine.

The protests have been escalating in size and depth with more and more communities taking part in street demonstrations and protest tents outside UN offices and the Red Cross offices. Issawi was joined by the rest of the prisoners for a one day hunger strike offices have caused Israeli officials to worry that if the protests continue it could turn terribly violent.

Palestinian protests in support of Issawi and his other hunger striking colleagues received an emotional surge when it was revealed that a prisoner died Saturday in Israeli custody. Arafat Jaradat, a 30-year-old father of two, was arrested two weeks ago and his lawyer had asked a military judge to have him reviewed by a medical doctor was rejected.

Israel radio has said that Jaradat died from a heart attack while a Palestinian doctor who witnessed the autopsy of Jaradat rejects this cause of death saying his arteries were clear but that his body reflected evidence of beatings.

The death of the Palestinian prisoner two weeks after his arrest on suspicion of throwing stones has highlighted the retraction of Israeli prison policies. Israeli high court has made it clear that torture is not allowed yet Palestinians are convinced that the death of Jaradat was a direct result of torture.

Palestinian prisoner hunger strike has triggered protests not only in the occupied West Bank but also in the Gaza Strip.

Of these, 1,031 are being held until the conclusion of legal proceedings, 178 are in administrative detention and 170 are under 18 years old.

Palestinian officials have been publicly supporting the prisoners and their demands for an end to the administrative detention policies which are based on emergency regulations. Palestinian media daily quotes officials in Ramallah as pressing the international community to join them in demanding an Israeli change of policy toward prisoners. Some 3,000 Palestinian prisoners held a one-day hunger strike Sunday.

In response to the growing protests, the Israeli government is said to be trying to use the carrot in addition to the stick. Israeli media have reported that top aides to Israeli prime minister Benjamin Netanyahu has indicated that Israel was ready to release $100 million it collects on behalf of the Palestinian government (but which were held back because of the U.N. move) in return for the Ramallah leadership cracking down on the protests.

The elephant in the china shop of course is the upcoming visit of the U.S. president. Obama is expected to spend two days in Israel in the second half of March and about two hours in Ramallah. Palestinians are expected to hold protests against the U.S. bias towards Israel. If the prisoner issue is not resolved by then, it is highly likely to leave a big shadow on the Ramallah visit in particular and reflect badly on the entire visit to the region in general.

Daoud Kuttab is a contributing writer for Al-Monitor's Palestine Pulse. A Palestinian journalist and media activist, he is a former Ferris Professor of journalism at Princeton University and is currently the director general of Community Media Network, a not-for-profit organization dedicated to advancing independent media in the Arab region. He tweets from @daoudkuttab