Israel and Hezbollah prefer a shadow war of terror and assassination rather than disturbing the uneasy truce on the Israel-Lebanon border, writes Ali Hashem. 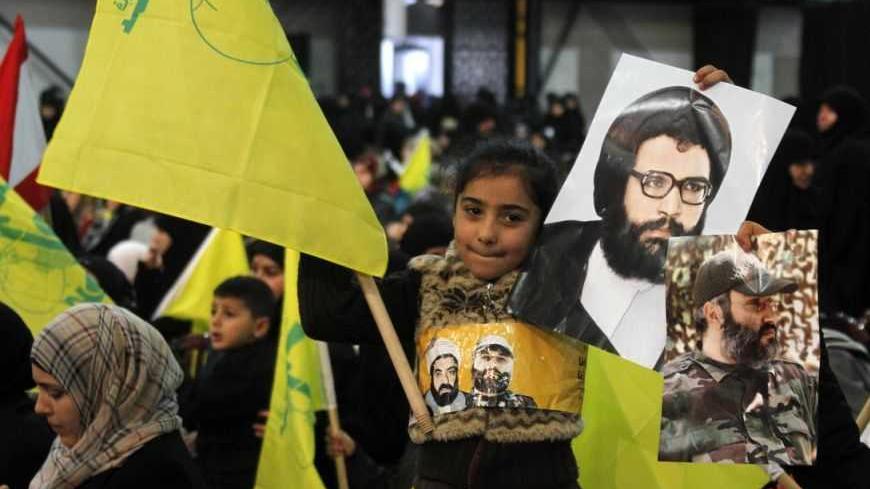 A child waves a Hezbollah flag as she holds pictures of martyrs as Hezbollah leader Hassan Nasrallah addresses his supporters during a rally to commemorate Martyrs' Day in Beirut, Feb. 16, 2013. - REUTERS/Sharif Karim

Five years ago, when Hezbollah's military commander Imad Mughniyah was assassinated in Damascus, fingers were quickly pointed toward Israel. The group's secretary-general, Hassan Nasrallah, promised to launch an open war on Israel to avenge his slain comrade. Everyone was worried the blood of the most wanted Hezbollah member might ignite a regional conflict. This never happened, and borders separating Israeli forces and Hezbollah guerillas, the usual arena for their hot skirmishes and battles, preserved its calmness. Both chose to fight another kind of war, a worldwide shadow war.

Before the assassination of Imad Mughniyah there were suggestions that he was the head of Hezbollah's foreign operations apparatus. He was accused of perpetuating attacks on Israeli and American interests in Argentine, Saudi Arabia, Cyprus and other countries, what qualified him to top the FBI most-wanted list till September 11, 2011.

After his death, Israel raised the warning level to red in all its embassies and interests around the globe. A source close to Hezbollah said on condition of anonymity, "Israel knows well that Imad Mughniyah himself planned his revenge before being killed."

Several attacks on Israeli interests in the past half decade were blamed on Hezbollah. The latest was the one that killed six Israelis in Burgas, Bulgaria, where a clear indictment by Sofia's prosecutors accused the Lebanese Islamist organization of perpetuating the attack. Days after the indictment, a Lebanese Swedish national, Hossam Taleb Yacoub, admitted that he was an operative of the group, acting as a courier in Europe and staking out locations frequented by Israeli tourists in Limassol, Cyprus.

Hezbollah never claimed responsibility to any attack on Israel outside the usual arena of struggle between both sides. It repeatedly said that such accusations are part of an Israeli-US campaign that aims at showing Hezbollah as an "international terrorist group that is destabilizing the world." This was the same response by Hezbollah when accused of planning attacks in Thailand, Turkey, India, Azerbaijan and other countries earlier.

Israel believes Hezbollah is the "A-Team of terror," as once described by Richard Armitage. According to the Israelis, the Shiite group is running an international network that involving Lebanese Shiites in North and South America, Europe, West Africa and East Asia. But it's also obvious the group have its operation functioning in Israel. In 2009 a severe indictment was issued against 23-year-old Rawi Fuad Sultani, a Palestinian Israeli, who was allegedly recruited by Hezbollah to spy on Israel's army Chief of Staff Gabi Ashkenazi. The Israeli investigation said Sultani officially joined Hezbollah and delivered the information he had collected Gabi Ashkenazi and the possibilities to harm him, thanks to the fact that Sultani worked out at the same gym as Ashkenazi.

According to the source close to Hezbollah, "Israel knows well what type of underground war is taking place, they hit one place Hezbollah hit in another, and a good example are the Israeli spy networks unveiled in Lebanon." The source added: "Hezbollah was capable of almost blinding Israel in Lebanon."

Lebanese security forces and Hezbollah uncovered several Israeli spies in Lebanon in the last three years. Some of those were within the ranks of Hezbollah. Israel was this time working on penetrating the solid structure of the group reaching to someone who was very close to the leadership. "The officer who was arrested was working for the CIA, but Hezbollah believes he was put in contact with Mossad," said our source.

Israeli spies were capable of infiltrating the Lebanese communication sector. At least two telecom engineers were indicted by Lebanese courts for providing Israel with information. Charbel Nahhas, former minister of telecoms, said in a press conference at the time that "this was the most dangerous espionage act in Lebanese history."

Both Hezbollah and Israel believe they are destined to fight each other, though both might think, given the existing deterrence, it's safer, wiser and maybe cheaper to fight away while watching the common borders getting calmer.