Egypt Still Can Spare Itself From Political Disaster

Bassem Sabry comments on the implications of the National Salvation Front’s call to boycott the upcoming parliamentary elections and the intransigence of President Mohammed Morsi and the Islamists. 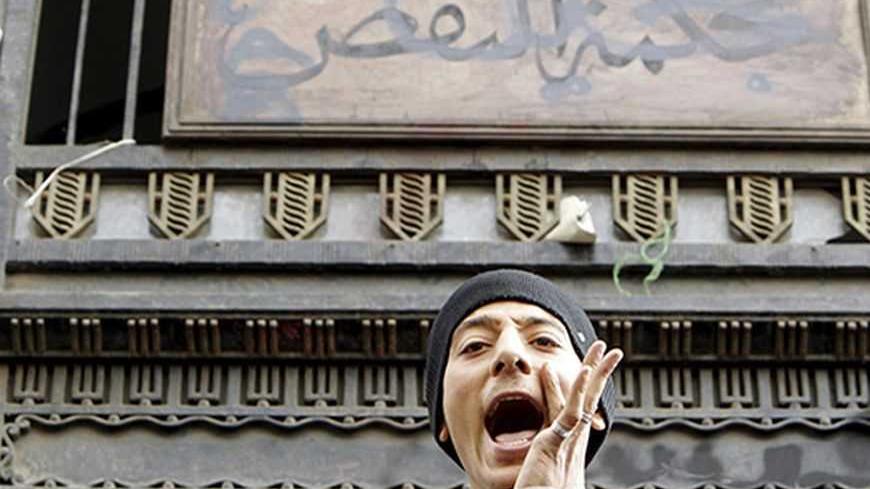 A protester shouts in front of the sign for the court of cassation during an anti-government protest in Cairo February 22, 2013. - REUTERS/Mohamed Abd El Ghany

Two days ago, Egypt’s main opposition group, the National Salvation Front (NSF), officially announced its intention to boycott the upcoming parliamentary elections. The momentous announcement came following a public call by the group’s co-ordinator general, former presidential candidate and head of the Constitution party Mohammed ElBaradei, for such a boycott and after his party had also announced its intentions not to run as well. The move itself, which had been threatened by the opposition for a while now, was in response to what the NSF saw as the continued refusal by the president and the Muslim Brotherhood to address its familiar core and long-standing demands, including sacking what they describe as a hand-picked prosecutor-general, setting a clear track for amending the constitution, as well as bringing forth a new government rather than the seemingly failing Qandil cabinet.

But the breaking point itself appeared to have been when the president had officially adopted the new electoral law, and called for parliamentary elections beginning late April. The law, the revision of which has been one of the main demands of the NSF, had originally been tossed out by the constitutional court, sent back to the Islamist-dominated upper house Shura Council to amend 10 articles in it. The council did indeed amend it, but all in a one-day marathon session rather than holding a broader debate on it as the NSF and others had demanded as well. Further, the Shura council decided not to resend the law to the Constitutional Court for review, arguing that it was not obliged to do so and that it allegedly complied with those amendments with the court’s requests. Other than further angering the opposition, this act started yet another debate on whether or not this next parliament’s legal status is actually protected from yet another potential exasperating dissolution. The opposition also went further and accused the new law of gerrymandering electoral districts in favour of the Islamists, a claim echoed around by many.

On the other side, President Mohammed Morsi held another round of national dialogue on the same day. This time, it was live-broadcast, a move aimed at improving his image and likely to further pressure the opposition to attend. But with the NSF still boycotting the talks and with most of the 20 or so attendees either allied or centrist voices, the talks didn’t feature any groundbreaking moments. One speaker even shouted enthusiastically claiming that there was no such thing as national consensus to begin with. That bit was particularly fun to watch.

To use a crude analogy, it all feels like a long and increasingly dangerous game of chicken. And if recent opinion polls are to be believed, both sides have taken a strong beating to their popularity. Morsi’s approval rating dipped to 49% (his lowest ever) down from 78% after his 100 days in office, with only 35% willing to re-elect him if elections were to take place today. The NSF (which, according to the poll, more than a third of Egyptians haven’t heard of) had an approval rating of only 35%, while only 12% found its conduct to be “good,” 33% found it average, while 42% found the NSF’s conduct to be outright bad.

The opposition is hoping that a threat of boycott would force the presidency and the Islamists to make some real concessions to avoid appearing to the entire world as having failed even further in managing the country’s democratic transition in a sufficiently consensual manner, to avoid the risk of plunging the country into further unrest and an economic downward spiral and the risk of failing to secure international aid that the country desperately needs amid increasingly uncertain IMF negotiations and while the government attempts to push through a package of far-reaching economic reforms.

These concessions would then theoretically lead to a state of national stability and consensus on how to move forward, and everyone would be better off. Or, at least, that’s the idea. And while electoral boycotts might in general have low rates of success (and would usher in a problematic Salafi-MB-Mubarak Regime-Remnants parliament), the opposition and their supporters believe boycotts were successful and instrumental in 2010 in fomenting the uprising the brought down Mubarak, and hope that still-fresh memory might strengthen the power of their calls.

Still, Morsi and the Islamists appear to be betting that the opposition would cave, that Al-Wafd (and perhaps another party or two) as well as enough independents would break ranks and run in the elections and give it sufficient legitimacy, or that somehow an expectedly high voter turnout would surprise everyone (or even use means to ensure the high turnout, such as repeating the 2011 imposition of fines for not voting). The theoretical result of such scenarios would be for the opposition to win a minority in parliament and consequently become a less powerful voice locally and intentionally, for political fights to localise within parliament rather than being centered on and toward Morsi and the streets. Also, the country subsequently would get under some control. Another theoretical potential result (as mentioned above) is for the elections to go forward with a full boycott as announced, but with a surprising high turnout (as what happened in Jordan) in a manner that would give it and an Islamist-dominated parliament more legitimacy, leaving the opposition out in the cold. And if things get somewhat more unstable in the country, they would blame the opposition for being the alleged reason.

But there are more radical potential scenarios.

For perhaps a part of the opposition and their supporters, again assuming both the boycott and the elections go through simultaneously, some are hoping to “repeat 2010,” in that the Islamist-dominated parliament (the arguable 2013 equivalent of the 2010 NDP-dominated parliament) would lead to enough public anger to kickstart another revolution, and even for the army to potentially take over from Morsi, whether by fully excluding him from power or by including him in some civil-military governing arrangement. But there are multiple problems with this scenario. First, unlike 2010 and 2011, this is not a case of the a united full-spectrum political front with Islamists, Liberals, leftists and independents against a statist authoritarian regime that rigs elections. Rather, this is a case of half of the country’s active political mass against the another, with one of them arguing it has a democratically elected president who still has legitimacy and that it is resorting to seemingly democratic means to deal with the current dispute. Like one commentator puts it, it is unlikely that the Islamists would just “go quietly into the night” if they and Morsi were forcibly removed by power. Dangerous and prolonged civil clashes then become very likely. And if the military takes over, and it would likely be popularly supported given the current mess the country has been in, it would be confronted by political forces from across the spectrum (even liberals who would not be capable of looking too comfortable with military rule) and subjected to potential physical attacks by radicals, whether Islamist or not. What’s more important: it's unlikely the military actually wants to come back to power after its self-damaging experience from 2011 to 2012.

An alternative extreme scenario for the Islamists and their supporters — which has its share of proponents — is to continue to try to steamroll the process as they did with the constitution, and hope that the opposition remains ineffective enough for the elections to take place. Then, parliament ends up dominated by the Islamists, the opposition continues to make a noise (but is controllable), the world would have to accept the Islamist parliament as the country had control taken by using ostensibly democratic means. But the risks of this scenario are manifold. It would continue to deepen the feeling experienced by many Egyptians that their country is being hijacked by a more organized force, one that will do anything to win and to impose their own ideological project on everyone else. The result could lead to long civil strife, massive instability, potential abandonment by several non-Arab international aid partners, and the country falling off the economic and security cliff. The army’s intervention, again, becomes a possibility.

But the exasperating fact is none of this is necessary.

Despite everything, it still mostly hangs in the hands of Morsi and the Brotherhood. I’ve recently written on how complicated resolving the current Egyptian crisis appears to be, but it all remains solvable. But until then, Egypt and its immediate future remain hostage to intoxication of power and a degree of paranoia by the president and the Brotherhood, and a lack of effective strategy, disorganization, and the influence of radical voices on the opposition’s side. To top it all off, there is a profound ideological divide that makes everything at times even more complicated, as well as an international community whose contribution appears to be ineffective if not, at times, counterproductive. Nevertheless, with enough boldness, honest dialogue and willingness to fairly engage the concerns of all sides by enough people, Egypt can still be spared potential disaster.