Will Egypt Have Its Second Revolution on June 30?

There is speculation about massive protests to occur on the anniversary of President Mohammed Morsi’s first year in power. 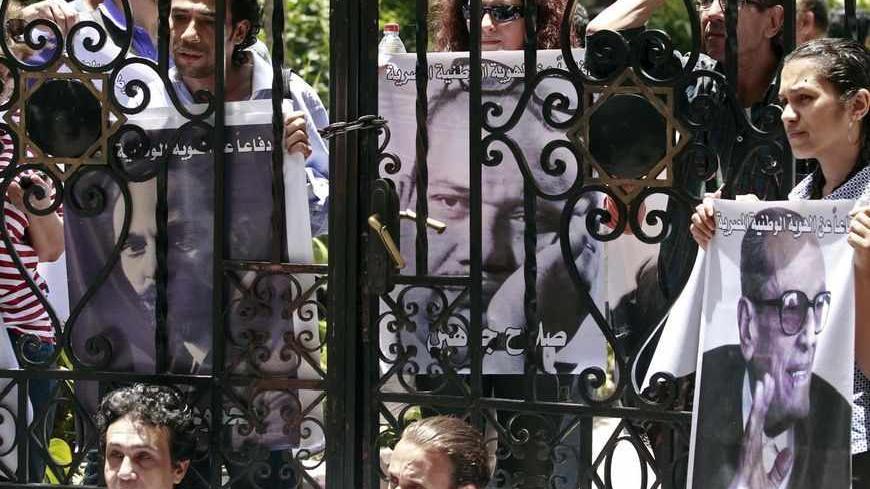 Intellectuals and artists protesting against President Mohammed Morsi carry pictures of popular Egyptian artists and writers in front of the Ministry of Culture in Cairo to demonstrate against what they claim is the increasing influence of the Muslim Brotherhood over the ministry, June 9, 2013. - REUTERS/Mohamed Abd El Ghany

The Egyptian public is as surely busy as ever. Between the recent international scandal involving President Mohammed Morsi’s dialogue with national political forces over Ethiopia (almost all attendees had no idea it was being televised live, leading to some very politically inappropriate utterances); leading opposition figure Amr Moussa’s leaked controversial meeting with Brotherhood strongman Khairat El-Shater despite the opposition’s stated boycott policy; and the extremely troubling verdict on the outrageous NGO trial that both punishes and threatens to paralyze civil society, the public has no shortage of issues to discuss and speculate on this week. However, the one topic that seems to be increasingly dominating discussions of late, locally and beyond, has been the national anti-Morsi and anti-Brotherhood protests set for June 30, around the anniversary of Morsi’s troubled first year in power.

The protests, whose origins still remain somewhat debatable, are widely expected to be a large-scale event. In fact, some are even calling upon other anti-government protesters and anti-Islamists in Tunisia and Turkey (the latter capturing the international spotlight as of late) and others to also hold mass protests on the same date, turning the day into a regional pro-democracy marching event. On the one hand, the opposition has largely seen the scheduled demonstrations as a manifestation of anger against the president and the Brotherhood, seeking reforms and political inclusion. But on the other hand, it seems that much of the anti-Islamist (more directly: anti-Brotherhood) local public sentiment expects something much more out of this. Namely, the stated hope is that the protests could be large enough to push Morsi to step down, and for the country to hold early presidential elections. The growing state of national frustration and the plummeting popularity of Morsi and the Brotherhood (and the opposition as well, for that matter), coupled with claims by the Tamarrod (Rebel) movement to have gathered more than 7 million signatures calling for early presidential elections in a very short time have given an extra boost of energy to those who expect more out of the protests. What’s more, Salafist Nour Party leader Yasser Borhami’s statement in which he claimed, “If millions like the ones in the revolution take to the streets, I will ask Morsi to resign,” has also given hope to some that not all Salafists will not come out in support of Morsi, or at least not in the same manner as they did in November and December.

But the remarkable thing is that, despite all the hype and anticipation, no one yet has any idea or vision as to what might happen on that day, nor does the opposition seem to be visibly leading the efforts to organize the protests or setting any clear public plans for them. In addition, it just seems that the general idea is that “something big” will happen, but there is very little debate as to what the potential scenarios could be, especially the less optimistic ones. So, what could actually happen? Here are some of the main theoretical possibilities.

Nothing (much) happens: Much like the hype that surrounded the fizzled “Aug. 24 revolution” of last year, the day ends up with nothing dramatic happening, whether due to Morsi and the Brotherhood using political carrots or intimidation, a major unrelated national event taking place before the protests that ends up distracting from the momentum, or due to the energy just gradually dying down. However, unlike the Aug. 24 protests, right now there is a much wider base of involved forces as well as a stronger momentum, suggesting a lesser chance of that momentum dying down.

Extended upheaval, followed by stalemate: The day does end up being a mass protest event, some violence almost inevitably ensues, clashes and protests continue for several days, and then somehow a stalemate evolves. Things then largely return to how they were pre-June 30, with perhaps minor political ground gained or lost by either side. Many see this as the most likely scenario.

Political breakthrough: Extended protests and upheaval also take place in this scenario, finally culminating with a national political deal of some sort that could lead to a more consensual political process and reconciliation. Morsi also stays in power, with no early presidential elections. Given how polarized the country is, reaching a political breakthrough would likely require a truly troubling descent into chaos, or a strong visible danger of such, that would scare everyone into some agreement.

Morsi crackdown: Another theoretical option, as protests erupt and violence takes place and possibly gets out of hand, is that Morsi and the Brotherhood could try to use the events as pretext for a crackdown on opposing forces. While this would cause massive national and international outcry, let alone being outright authoritarian, there is little certainty anymore as to how aggressive the Brotherhood could get nor what it could get away with.

Military intervention: Protests grow to a large scale and/or violence gets out of hand, then the government’s handling of the situation inflames it even further and creates strong national and international criticism and condemnation. This leads to what appears to be a currently unwilling military to step in, whether through an attempt to restore calm and/or to exercise pressure on the parties in the conflict, or the other theoretical possibility of taking over power. I’ve recently written about the sorts of complications and instabilities that would arise if the military were to take power, including either a potential of a more fierce and confrontational Islamist return to power through elections, and/or the birth of an iron-fisted security state to contain national chaos, a likely general inability to govern, and pretty much the assurance that the democratic transition (and the economy) will be at least comatose for at least several years in the most optimistic of estimates. It is highly unlikely that any presidential elections would take place any time soon following such a scenario, and any eventual new president would very likely be stillborn.

Protests succeed, early presidential elections: The original stated target remains, of course, another theoretical possibility. The protests are large, of extended duration, and Morsi finds himself forced to step down under public pressure. Under the Constitution, the head of the Shura Council (a Brotherhood member) would then take over power and call for new presidential elections. The irony, for it being the most touted target, is that it seems to be the least probable scenario.

These are not, for sure, all of the possibilities. And I genuinely believe that Egyptians have true reason to protest. But having said all of this, for me the more important story is not the potential events of the day or their possible consequences, nor that most of these scenarios would very likely end with Egypt engulfed in instability and/or paralysis for a considerable time, but rather the fact that Egypt has reached this dramatically troubling state, and only one year after its first civilian president was elected with so much promise. It truly never had to be this way, something I frustratingly keep stating to likely a boring degree. Today, there is a deeply divisive new Constitution, a choking economy, an increasingly dysfunctional state, a threatened civil society, a beleaguered judiciary, a legislative agenda that is infuriating to too many, an increasingly power-hungry and unilateralist president and ruling Muslim Brotherhood, and a disorganized and substantially ineffective opposition that appears increasingly lost. It is also this very same opposition that once formed part of the coalition that won Morsi the presidency that now leads the efforts against him with at least some legitimate grievances, which further highlights how tragic the current state is. What’s worse, the country is now more polarized than ever, the different sides and their supporters becoming increasingly radicalized and unwilling to compromise (regardless of right and wrong), and the public sphere is growing increasingly heated as well. Many around me think there is still some chance to right what is wrong and reclaim even some of the earlier promise, but they simultaneously also have less and less faith this chance would ever be seized upon. As Morsi approaches the anniversary of his first year in power, it is perhaps the ultimate irony that this anniversary is to be marked by an attempt to repeat the 2011 revolution that actually brought him into power, and largely by the very same people who sparked that very same revolution against the former dictator who once imprisoned the current president.

Bassem Sabry is a writer and Egyptian blogger who covers the region on An Arab Citizen. On Twitter: @Bassem_Sabry​