The decision by Egypt’s Administrative Court to postpone the parliamentary elections scheduled for April provides President Morsi, the Brotherhood and the opposition an opportunity to reconsider their strategies and take the country back from the brink, Bassem Sabry writes from Cairo. 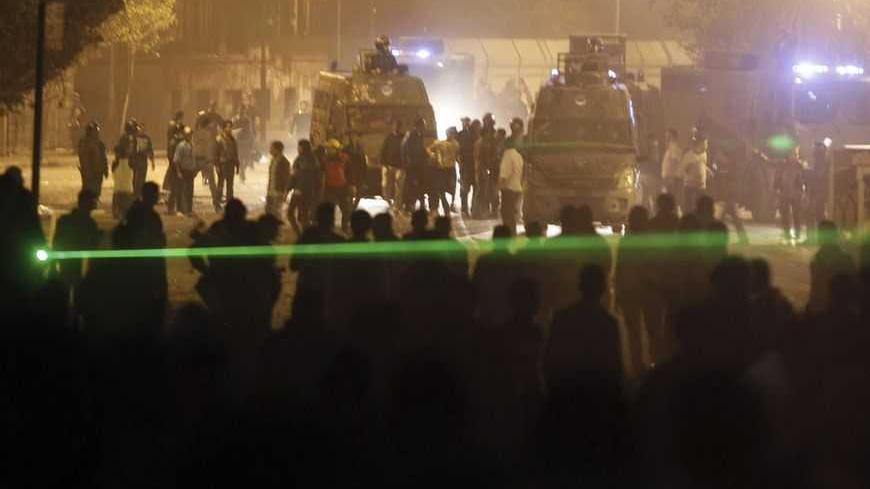 A person in the crowd uses a laser pointer as protesters, who oppose Egyptian President Mohammed Morsi, face off against riot police during clashes along Qasr Al Nil bridge, which leads to Tahrir Square in Cairo, March 9, 2013. - REUTERS/Amr Abdallah Dalsh

CAIRO — Days before candidates were officially due to apply for the parliamentary elections, and while the country was bracing for one of the most decisive weeks in its modern history, Cairo’s Administrative Court decided things were not complex, tense or beguiling enough as they were.

The court issued a decree overturning President Mohammed Morsi’s decision to call elections at the end of April, referring the just amended electoral law to the Supreme Constitutional Court (SCC) for review. At the heart of the dispute, at least officially, was the Islamist-dominated Shura Council’s (the still-standing upper house of parliament) not returning of the law to the SCC for a secondary review after rushed amendments. Those amendments were also accused by the opposition of keeping many of the protested aspects of the law since its earlier days as a draft, even allegedly gerrymandering districts, and has been a major source of political contention.

Proponent council members had argued they were not obliged to do such a secondary submission, and claimed they had already complied with the court’s suggested amendments. But — at least in my humble opinion — that was utter nonsense. If their postulation were correct, it would mean that parliament can write an unconstitutional law (perhaps even intentionally), send it to the SCC, get it back for review and then amend it anyway they desire and just claim the court’s concerns were addressed, whether or not they actually were. In fact, if there is just one good thing about the court’s decision, it is that the upcoming parliament, whenever and whatever it is, would now at least be on more solid legal grounds, and unlikely to be subject to another sudden dissolution as its predecessor.
For the opposition, this is of course some sort of an unexpected miracle, and on so many levels. First, now that candidate applications won’t begin this week, the opposition was temporarily spared any potential breaking in ranks (that is, by individuals and parties deciding to participate in the elections against the official boycott) and/or any unexpected strong flow of independent candidates. Either scenario alone would have rendered the opposition’s boycott either meaningless in effect or of less significance and impact, with the former potentially even leading to the partial or full breaking up of the National Salvation Front (NSF) altogether. Additionally, it gives them more time either to prepare or improve their ostensibly incomplete strategy for what comes next, whether an extended boycott-and-pressure campaign, any later decision to just enter the elections if internal pressures mount, or anything radically beyond. But it also gives them more of a chance to better go after what would be best for Egypt and everyone: the country achieving a real and viable political breakthrough.
With several areas in the country heating up, worrying economic figures, police and CSF members protesting, upheaval arising from the Port Said stadium massacre court verdict, and a steady loss of pretty much all but the most staunch of allies and supporters, the court’s decision is a blow to Morsi and Brotherhood, both of whom were betting everything on the elections. After already a few confrontations with the judiciary and seemingly mounting hostilities (the showdown over the constitutional declaration in particular was a watershed moment), the verdict was interpreted by some as a sign of increased willingness by at least a number within the judicial branch to play an activist political role. And with anger and impatience against Morsi allegedly on the rise within the army and the ministry of interior, albeit for different reasons, the president finds himself in less control of a state whose bureaucracy was already not too warm toward him. It doesn’t help that even the largest Salafist party, al-Nour, is also now at odds with Morsi and the MB and has fiercely joined the “anti-Ikhwanization” campaign.
If the newspaper Al-Shorouk’s estimate that elections would not take place before mid-August and given such dire national conditions, the president and the Brotherhood will likely find themselves under more pressure to make a far-reaching and deep political national reconciliation deal they do not seem to actually want to do, at least not anymore. With fuel prices also originally due to officially rise immediately after the previous date of the elections, the Brotherhood would now choose between either taking a further hit to their popularity come election time or risk further reserve declines, deficits, and clashes with the IMF over subsidy-reform.
The presidency and the Brotherhood appear uncertain over how to confront this legal situation. One statement suggested the presidency will appeal the court decree while a later statement suggested that nothing of the sort would take place. So far, only a Brotherhood lawyer has reportedly appealed the decision in a personal capacity, which would likely lead to the appeal being dismissed. Other than furthering antagonizing the judiciary, any attempts at any extraordinary actions through the Islamist-dominated Shura Council or through the presidency (that is, something of a similar grand nature as the November constitutional declaration or as Morsi’s last year attempt to reinstate the dissolved parliament) could further bolster the increasingly negative image of the president and the Brotherhood, and give greater backing for any political intervention by the military.
But ironically, this all might actually be the best thing to happen to Morsi and the Brotherhood, against their own judgment. Using the simplistic and crude analogy I recently employed, the country cannot actually handle any longer the game of “Chicken” that is being played by its political forces. Morsi and the Brotherhood in particular seem to been risking too much — including their own power — for political gains that are likely to flare up the country even further and put them in an even more precarious situation. If there is a single farsighted person in the Brotherhood anymore, this might very well be the (forced) chance to bring the country back from the brink, end Morsi and the Brotherhood’s slide into becoming everyone’s enemy, and enact broad national reconciliation. And if polls were to be believed, let alone common-sense observations, then this would also be a good time for the opposition to realize that it’s time to try something different, and that what they’ve been doing so far has led them to lose both politically and popularly, time after time. But then, it’s always easier for everyone to just keep waiting for disaster before deciding to pull the breaks.
I’ll say one more thing, though: if anything was proven in all of this, it’s that political analysis for anything more than three days ahead in Egypt is an exercise in futility.
Bassem Sabry is a writer and Egyptian blogger who covers the region on An Arab Citizen. Follow him on Twitter @Bassem_Sabry