Can The Political Crisis In Egypt Actually Be Resolved?

Bassem Sabry outlines the program for a political dialogue in Egypt, but the steps required would involve compromises by both President Mohammed Morsi and the opposition. 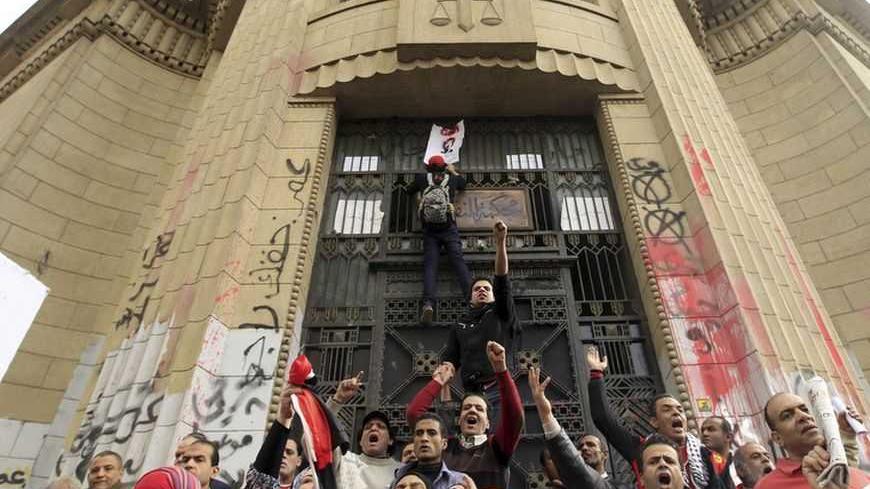 Protesters opposing Egyptian President Mohammed Morsi shout in front of the courthouse and Office of the Attorney General, which has been tagged with anti-government slogans, during a protest against Morsi and the Muslim Brotherhood, near Tahrir Square in Cairo, Feb. 22, 2013. - REUTERS/Mohamed Abd El Ghany

The background has become almost like a stump paragraph in all articles about Egypt.

There is a choking economy, the state is running out of currency reserves, an increasingly unpopular government is strapped for cash to cover public spending, both President Mohammed Morsi and the MB on one hand, as well as even the opposition on the other, are growing more unpopular; the army appears to be sending vague messages that instability would not be tolerated (especially after rumors floated that Morsi would potentially sack Defense Minister Gen. Abdul Fatah El-Sisi); the judiciary remains on high alert after its recent confrontation with Morsi and Islamists protests continue to rock the country; civil disobedience in Port Said was a big surprise to the nation and a shock to Morsi, the interior ministry is being engulfed in more and more controversy involving the excessive use of force and alleged torture and abuse; and, a regrettably more and more familiar list goes on.

While the roots of the current Egyptian political crisis are manifold and the solution is consequently nothing but straightforward and immediate, it is generally assumed that if the opposition National Salvation Front (NSF) and the Islamists (mainly Morsi, the Brotherhood and the Salafist Al-Nour party) could actually manage to work out a comprehensive political deal that would both be satisfactory to their organizational and popular bases and resolve some of the more major reasons behind the current deadlock, then at least the general downward spiral could be stemmed. And with the political gridlock taken out of the picture, the country could perhaps stabilize enough for the suffering economy to get back on track.

With the exception of two reported meetings between the NSF figures and FJP Chairman Saad El-Katatny, though apparently in individual rather than official capacities, the opposition continues to refuse to sit down for dialogue or enter the upcoming parliamentary elections until a set of debatable preconditions are met, the reasoning being to show that — unlike what they argue to have not been the case before — there is a seriousness to solving to crisis and a willingness to compromise by the Brotherhood and the President.

The demands of the opposition have been somewhat modified here and there since the beginning of the crisis, but there are a few main persistent themes throughout. First, they demand a new electoral law that would essentially ensure a fairer distribution of seats between the districts and also address weak female representation, among other concerns. They demand the removal of Morsi’s hand-picked prosecutor-general and the appointment of replacement to be nominated by the judiciary. They call for investigations into recent violence, especially the attack on the sit-in by the presidential palace. There are also demands for legal guarantees and international supervision of the elections, to ensure fairness and lack of fraud. Another strong demand has been for the installation of a new, preferably technocratic, government to take the reins from an unsuccessful Hesham Qandil government. Another demand has been the official registration of the Brotherhood before the elections, and its submission as a documented organization to the laws of the state. The final, and perhaps most complex demand, by the NSF is the insistence on an empowered committee be formed to work on amending the constitution before the elections.

In a sense, all of these demands present substantial political and practical challenges for all sides on the table, and each one of them includes a different map of potential alliances. For example, while the NSF and the Salafists have joined forces in demanding a change of government and against the “Ikhwanization” of the state (Brotherhood members taking over key positions all over the state apparatus), Al-Nour and the Brotherhood (which have been locked in a public spat as of late) are likely to continue to remain closer on the constitution, and the Opposition and the Brotherhood might (temporarily) find common grounds in resisting the more hardline-religious legislative approach of the Salafists, albeit for very different reasons. But three main issues stand out as the more potential major gridlock items.

The first would be the call for investigation into recent violence and claims of abuse. The problem here is that an unbiased investigation into the attack on the presidential palace sit-in could potentially lead to legal (and political) trouble for the Brotherhood if their members were indeed officially proven to having been the perpetrators of the attack. The second issue is that it would put the police under an even brighter spotlight, with it already under much heat as of late, and could eventually lead to the potential prosecution of members of the force. With Morsi desperate to solidify his control of the state, he is likely to want to avoid a confrontation with the ministry of interior.

The second is the subject of the new government. While everyone largely agrees that the Qandil Government has not been a success, Morsi and the Brotherhood appear to hope it could continue until the new parliament convenes and selects a new government. First, it would avoid an official admission of defeat and failure, with Qandil now de facto associated with the Brotherhood even though he’s not officially a member. The second is that Qandil, who knows he’s most likely set to leave, is in the process of taking some very unpopular decisions with regards to subsidy reforms, pound devaluation and flotation, much of which connected to the controversial IMF loan. If Qandil were to be replaced, the new government would still get all the blame for the difficult costs, human and otherwise, that these reforms would entail, rendering the new government unpopular from the get go.

The third and most complex problem is the constitution. The Brotherhood has invested much effort promoting it as their crowning achievement, though without much success. But the bigger challenge for the opposition on the subject are the Salafists, whose work on the constitution perhaps remains their most defining political coup in front of their base, a base wherein many do not feel the constitution is Islamic enough as it stands.

The gulf between the opposition and the Salafists on several religious-inspired or themed constitutional articles is substantial. If these articles were to be successfully amended, it would theoretically either require the Brotherhood working with the opposition against the Salafists, which is likely to start another round of civil unrest and a cause big divide inside the Islamist base of the Brotherhood itself.

The other alternative is for the opposition and the Salafists (and the Brotherhood) to work out a difficult, intelligent, and likely out-of-the-box, compromise. But even so, could this all actually be finished before the parliamentary elections? Can a committee be legally tasked with amending the constitution and such amendments be debated extensively then put to referendum practically and constitutionally before parliament convenes, so that the new parliament would swear its oath on the amended constitution as the opposition demands? Difficult, but not impossible, and it would require a delay of the elections and the widely-accepted government taking office.

The likely alternative, especially for the Brotherhood, is to attempt to soldier on until the scheduled elections take place, the new balances of power in parliament reveal themselves (and Islamists expect a big victory due to their organizational prowess), and then try to use the argument that the ballot boxes have effectively settled the political debate. But with Parliament officially not set to convene before July 6, the economy is not likely to keep it together this long under draining reserves and major deficits, the long elections — set for the end of April over four stages requiring three months — would likely lead to more conflict, and the radicalisation of protests and politics could possibly increase. And if the opposition does boycott the elections, then the country is likely to get even more polarised and unstable.

In any case, resolving the political crisis is not impossible. But it would require some very profound decisions, ones that should have been taken months ago.

They would require the Brotherhood to admit that Egypt is bigger and more complicated than they could chew alone, that the democratic process should be the priority rather than the construction and solidification of a new regime, that democracy is more than ballot boxes and simple majoritarianism, and that not everyone in the world is actually out to get them.

The Salafists would have venture outside of the preset and ultra-defined political and ideological propositions that governed them thus far, and continue on a process of evolution they seem to have been undergoing as of late. The opposition would also need to continue to keep close ranks so as to remain a considerable force (schisms or dissolutions in the NSF would just be a very bad idea), attempt to calm down the more firebrand elements within the ranks, and — once real and fair guarantees are there — take a very difficult leap.