Can the IDF Absorb The Ultra-Orthodox?

Alon Ben David examines the politics of equally sharing the burden of military service, a winning slogan in the recent election. 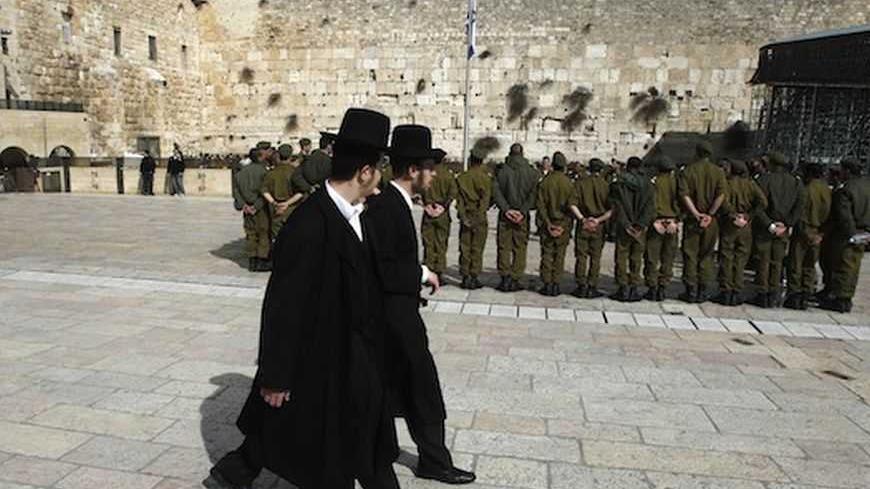 The recent election results clearly showed how much the issue of equal sharing of the military-service burden means to large parts of the Israeli public. The enlistment of ultra-Orthodox men in the Israel Defense Forces (IDF) is a key issues under dispute in coalition negotiations, and it's expected to be one of the first issues dealt with by the new Netanyahu government — whatever its makeup turns out to be.

In the absence of alternative legislation to the Tal Law, which exempted ultra-Orthodox men from military service until it expired last August, the IDF should have already taken action to draft them all into the army, in accordance with the Military Service Law. The question, however, is whether the IDF really needs all those tens of thousands of rabbinical college students who have declared the study of the Torah to be their full-time occupation. And supposing the IDF needs any of them, how many of them does the army actually need? How would the mass recruitment of the ultra-Orthodox affect the nature of the army?

The IDF is closely following the negotiations on forming the next government and has temporarily suspended drafting the 19,000 ultra-Orthodox young men aged 18 to 19, on the understanding that a new arrangement is expected soon. Out of that group of draft-eligible ultra-Orthodox young men, 3,200 have already passed preparatory classification processes at the IDF Recruitment Center and, according to a senior IDF officer, the army is ready to enlist them “at any moment.” This would require the IDF to form new units — possibly even one or two ultra-Orthodox battalions —and to prepare associated infrastructures. The IDF maintains that it might be done in the upcoming annual March draft. Some have even proposed that, now that the flow of infiltrators through Egypt has stopped, the Saharonim detention center, originally built in Ktziot in the Negev desert, could be converted to accommodate a new ultra-Orthodox battalion.

As far as the army is concerned, the issue of drafting the ultra-Orthodox into the IDF cuts both ways.

On the one hand, as instability grows along Israel’s borders, so does the need for an ever larger number of regular service soldiers. However, while the IDF seeks to preserve the gradually eroding ethos of the people’s army (in 2012, the number of ultra-Orthodox exempt from military service reached 14% of the total number of draft-eligible Israelis), the IDF’s annual draft numbers have declined for several years now. The number of soldiers in IDF combatant units has decreased, and the shortage can be felt elsewhere in army lineups. Meanwhile, the number of routine security and border-protection tasks has increased. The threat of terror from the Sinai Peninsula requires deploying large forces along the Egyptian border. As Syria disintegrates, the IDF must reinforce its forces in the Golan Heights. The Lebanese border was and remains a confrontation line. IDF decisionmakers believe that in the near future, Israel’s long border with Jordan will also require tighter security. But the IDF expects annual draft numbers to remain low over the next few years — too small to take care of all the above mentioned tasks. An increase in the IDF's annual drafts isn't expected until 2016.

On the other hand, the IDF realizes that enlisting the ultra-Orthodox en masse could affect the nature of the army and undermine gender equality in the army. The IDF has no interest in recruiting all 60,000 ultra-Orthodox men aged 20 to 28, whose military service has already been deferred. Their integration into the army and their training for service in the army, which would have to be shortened, along with the “family bonus” (extra pay given to married soldiers with children), would be too heavy a burden on the army. At the same time, the army's benefit from their service could be negligible. Likewise, drafting the 19,000 draft-eligible ultra-Orthodox young men aged 18 to 19 would require the IDF to make some very complex adjustments.

This is why the IDF has long refrained from establishing homogeneous frameworks for soldiers from similar backgrounds. The ultra-Orthodox battalion is the exception, and the IDF has no intention of creating an ultra-Orthodox framework on the scale of a brigade. At the most, other battalions could be formed to protect the borders. Most ultra-Orthodox recruits would be referred for service in the police or the border police, where some additional 5,000 soldiers are already needed.

The integration of thousands of ultra-Orthodox draftees into the army would shatter the “melting pot” myth of the 1950s and 1960s — which has already been eroded by the sheer existence of two types of kitchens, as well as by the declaration of certain army bases and facilities as out of bounds for women. Indeed, how can the IDF expect to motivate young women to enlist in the army when they are gradually barred from more and more units?

At the moment, less than 60% of draft eligible young Jewish women enlist in the army (35% of the 2012 draft eligible women were exempted for religious reasons). The number of young women opting out of military service would inevitably increase if an increasing number of army units become male-only units.

The IDF seeks to prioritize the wages of soldiers serving in the army over the salary of those serving elsewhere, including national service. The IDF also wants to retain the right of priority and select draftees it deems most suitable for army service, while referring others to alternative frameworks. Thus, the “people's army” would become a class-divided body — a “differential service model,” as it is dubbed in the IDF. Soldiers in combat units would be at the top of the pyramid, and they would have to do the full, mandatory three-year army service. In return, the IDF plans to reward them with substantially higher wages than those earned by other soldiers. Under those plans, soldiers in rear units would receive reduced wages, and some of them will do a shorter service.

Will the IDF remain the “people's army?” It is not at all sure. Given the fact that 30% of Israel's first graders this year are ultra-Orthodox, it is evident that the IDF of 2024 will be a very different army.