Why Israel is voting again

The history of the draft law that took down one government brought about a second election within one year, divided ultra-Orthodox and secular, and has served as a moral bone of contention and fuel for a political fire for decades. 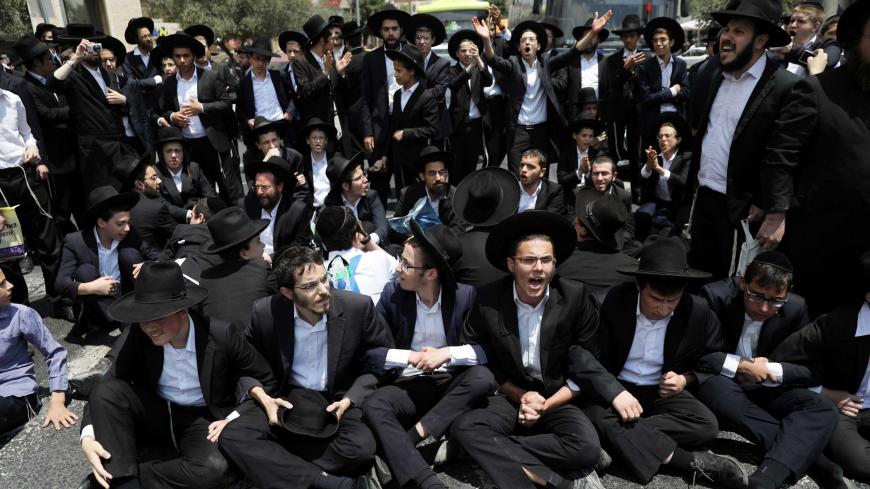 Ultra-Orthodox Jewish men protest against the detention of one of their community members who evaded a military draft order, Jerusalem, Aug. 2, 2018. - REUTERS/Ammar Awad

Israel’s Knesset vote May 29 to disperse and hold a fresh vote Sept. 17 after one month is a first in Israel’s political history. Prime Minister Benjamin Netanyahu failed to compose a majority coalition, in view of a fundamental discord over the enlistment law within Israel’s right-wing camp — the two ultra-Orthodox parties, Mizrahi Shas and Ashkenazi Yahadut HaTorah, versus Yisrael Beitenu leader Avigdor Liberman, who represents the secular right.

The issue of enlistment in the Israel Defense Forces (IDF) has been one of the central bones of contention in the State of Israel ever since it was founded. In fact, the issue has divided the public for years, with tens of thousands protesting in the streets, and has been used as political fuel by various political parties. Still, this is the first time this issue generated new elections twice in the same year.

The latest enlistment law proposal, presented to the Knesset by then-Defense Minister Liberman, nearly passed the previous Knesset. It was approved by the government and passed an initial reading in 2018, but the opposition of one of the ultra-Orthodox factions — the Gur Hasidim, who are represented by Minister of Health Yaakov Litzman — created a coalition crisis and in the end caused an early election.

True, at the beginning, Liberman’s compromise proposal was actually accepted by many within the ultra-Orthodox leadership. The proposal enabled most yeshiva students — about 70,000 youths ages 18 to 24 — to continue receiving an exemption from military service while requiring the enlistment of only a small minority. According to data published by the Knesset’s Research and Information Center, this minority counts some 3,000 ultra-Orthodox annual enlistments, while 15,000 receive exemption or their army service is postponed. Two thousand opt for civil or community service.

These numbers are a far cry from the initial concept of exempting ultra-Orthodox yeshiva students from army service when, in 1948, Israel’s first Prime Minister David Ben-Gurion accepted this exception for 400 youths.

All an all, according to the Knesset’s numbers, about 11,000 soldiers identified as ultra-Orthodox currently serve in the IDF — a 45% increase compared with 2013. According to various estimates, most of them don’t belong to the mainstream of ultra-Orthodox or the Mizrahi ultra-Orthodox stream, and attended Shas-affiliated yeshivas prior to enlistment.

But while several ultra-Orthodox leaders accepted the Liberman compromise, the grand rabbi of Ger, the most powerful figure in ultra-Orthodox society, was against it. The reason for his opposition was the sanctions embedded in the bill, in the form of reduced government funding for those yeshivas that will not meet the enlistment quotas, which should go up by 5% yearly. Still, on the backdrop of the recent crisis on the composing of the coalition, even he agreed to compromise presented to the ultra-Orthodox by associates of Netanyahu: The law would refer to enlistment quotas, but the specific number would be determined not by the law but by the government.

On the other hand, Liberman, who presented the enlistment law a year ago, refused to comprise for that very reason. He said that the law itself is already an essential compromise on the part of the secular. The law proposed by Liberman a year ago was drafted by a committee of legal experts and professionals from the Defense Ministry and the IDF. One of its key clauses was taken from a previous law and, in order to reach the targeted quotas for enlistment, set a broad definition of “ultra-Orthodox” that includes youths who studied for merely two years in an ultra-Orthodox institution in elementary or high school. This definition included in the law those who dropped out of these educational settings, who are called “Shababniks” on the ultra-Orthodox street, many of whom became secular. Thus, it encompasses youths who aren’t ultra-Orthodox, but were sent to ultra-Orthodox schools in an attempt to reform them or who wished to become more religious.

Many of those who enlist in recent years meet these definitions, although the IDF does not supply data on these demographics. A document written by the Knesset’s Research Unit determined that 20% of enlisting soldiers defined as ultra-Orthodox do not serve in units that are tailored for this sector, i.e., they serve in units that do not supply special kashrut status according to ultra-Orthodox rules and require soldiers to serve alongside women. These findings suggest that many of those enlisted with the army as ultra-Orthodox are not really ultra-Orthodox in their daily lives. In addition, even within the IDF combat units established for the ultra-Orthodox, and especially in the “Netzach Yehudah” battalion, there are soldiers who are not ultra-Orthodox. A senior official in the IDF’s human resources branch told Al-Monitor that the battalions serve as a magnet for yeshiva dropouts, who make up close to 20% of students in the ultra-Orthodox educational system.

A senior member of Shas told Al-Monitor that the movement understands it is easier for dropouts from the Mizrahi ultra-Orthodox yeshivas to enlist because many come from families that include secular and traditional Jews, who are more accepting of such a choice. According to him, for the Ashkenazic ultra-Orthodox, who live in insulated tribalism, there are hardly any models of soldiers for emulation and the social price for those who enlist is heavy. Thus, only a small minority of ultra-Orthodox who enlist are from the mainstream of ultra-Orthodox society.

In light of the High Court decision regarding enlistment, ordering the government to come up with an equal draft law, and criticism from the secular public that the ultra-Orthodox don’t share the burden of army service, ultra-Orthodox leadership is now willing to compromise, on the assumption that the quotas would be filled mainly by dropouts, Mizrahim and the newly secular.

However, we should also note that the sharp rise in ultra-Orthodox enlisting in the IDF in recent years does not only include those who have left the religious ranks or Mizrahi ultra-Orthodox. Among the Ashkenazi Hasidic sects there is a growing number of young men who wish to maintain their lifestyle but also enlist in the army. The increased motivation of enlisting the ultra-Orthodox has led to the formation of new combat units, in the infantry battalions of Givati and the paratroopers, and not just in the targeted framework the army created for ultra-Orthodox soldiers in the past decade, such as the combat unit Netzach Yehuda and the technological Shachar unit. This trend has scared leaders of the ultra-Orthodox, and they have tried to diminish it.

The issue of enlistment has moral and practical aspects. On the moral level, there is a structural inequality in the exemption from enlistment for ultra-Orthodox yeshiva students, as opposed to the non-ultra-Orthodox public that mostly enlists in the IDF at 18, serves for two to three years with exceptionally small compensation and risks their life for the sake of the country. Only 15% of the ultra-Orthodox enlist, compared to 70% of the rest of the population. The ultra-Orthodox side argues that the morality in keeping the Torah laws is no less important and what had preserved the Jewish people in the Diaspora all along was Torah study and maintaining a Jewish lifestyle. According to them, the ultra-Orthodox are the keepers of the Jewish people’s flame and soul.

The practical aspect is mostly economic. Those ultra-Orthodox who are of enlistment age — 18-24 — are prohibited from working during the period of their enlistment deferral, as the reason for the exemption is studying in a yeshiva. The significance of their nonparticipation in the job market is a decline in market productivity and tax revenue, more welfare payments and other ramifications. For these reasons, among others, the ultra-Orthodox sector is considered the poorest in Israel and more than half of the ultra-Orthodox live under the poverty line.

The 1948 arrangement of deferring army service for the ultra-Orthodox grew. In 2000, after massive public protest, the Tal Law was legislated, which gave an option to young ultra-Orthodox men to enter the job market and later enlist in the army or in national service. The law was struck down in 2012 by the High Court, which decided that it violates the principle of equality and is therefore illegal.

Following its nullification, a new enlistment law was legislated in 2014, which set yearly quotas for ultra-Orthodox enlistment in the IDF and national service. The law sparked forceful protests from the ultra-Orthodox, and in 2016 it was changed; the enlistment quotas were reduced and the sanctions were canceled. The High Court intervened again, struck down the law and instructed the state to legislate a new law in 2018.

The second law’s nullification led to Liberman’s enlistment law, described above. A law proposal that in the end brought about two elections within nine months.