Trial Is Latest Round In AKP Attack on Military

Tulin Daloglu writes that the current trial of former military leaders is another sign that the AKP’s democratization agenda is really about curtailing any threat from the military. 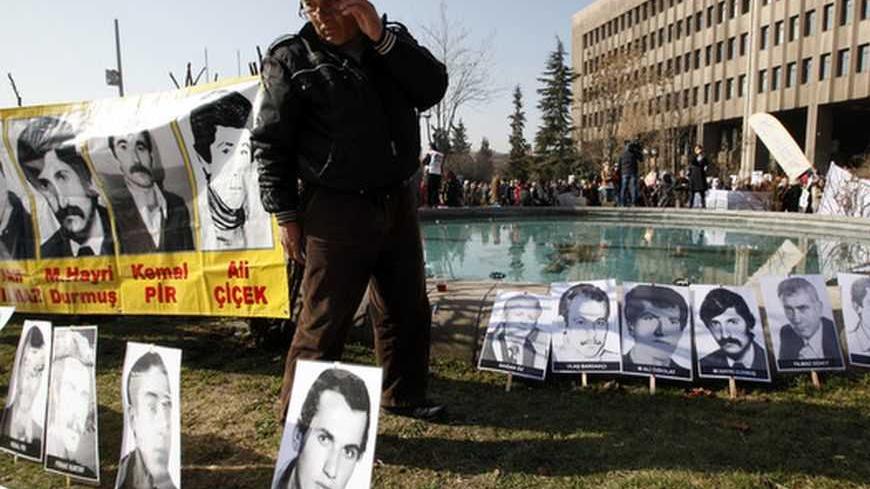 A man looks at portraits of people who were executed, disappeared or died in jail during military rule after a 1980 coup, as protesters demonstrate in front of a courthouse in Ankara April 4, 2012. - REUTERS/Umit Bektas

The Justice and Development Party (AKP)'s 2002 rise to power as Turkey's first Islamist-based, single-party government, ending a long period of coalition governments, came as the US was responding to the terrorist attacks of Sept. 11, 2001.

Since then the wars in Afghanistan and Iraq, along with revolutionary changes in the Arab world, have thrown the region into turmoil. A political and economic disorder persists as actors in the region and from afar jockey to shape their preferred futures.

Meanwhile, Turkey is experiencing an incredible transition and it's unclear whether the government of Prime Minister Recep Tayyip Erdogan is trying to start a counterrevolution against the nation's founding principles, or attempting to strengthen its democracy.

Since his government came to power, democratization in Turkey has been mostly about diminishing the military's role in politics.

The ruling party has been successful in its mission. While Turkish democracy remains problematic — to say the least — the Turkish military has lost its high standing in the public eye and carries almost no weight in shaping the political conversation. Putting nearly a thousand retired and current military men on trial and sending nearly 400 of them to prison have accomplished this.

On Jan. 3, Ismail Hakki Karadayi, former chief of the general staff, was taken from his Istanbul home by police at 6:45 a.m. and brought to Ankara to testify as a suspect before a special prosecutor investigating the so-called "Feb. 28" process.

A coalition government led by Turkey's first Islamist-based prime minister, Necmettin Erbakan, lasted from 1996 to 1997, and the way it collapsed has been described as a postmodern military coup known as the Feb. 28 process.

On Jan. 5, 2011, Ilker Başbuğ, also a former chief of the general staff, was arrested after an early-morning raid at his home and has been detained at Silivri prison ever since, though he hasn't been convicted of anything.

While the two retired top military men don't face the same charges, their implication in these probes highlights that an era marked by heavy military influence on Turkish politics is now under scrutiny.

Military and civilian authorities are engaged in a high-stakes showdown. Special prosecutors are accusing some retired and current members of the military of belonging to "Ergenekon," a group whose aim is to overthrow the government. Alleged members of this group — including Başbuğ — are accused of being "terrorists." In a separate, unconnected trial, Karadayi will testify about his role as general staff chief during the Feb 28 process.

In June, speaking before a parliamentary committee investigating past military coups, Karadayi said that the Feb 28th process "was neither a coup nor a postmodern coup. This was the result of mistakes that were made at the time."

Karadayi said that when Erbakan asked: "Will this big transformation [changing Turkey into an Islamic Republic] be bloody or bloodless?" his question raised concerns in Turkey. The former general staff chief argued that Erbakan's coalition government didn't take concerns over the rise of Islamist fundamentalists seriously, and that the military acted within the law to protect the republic and its secular nature. Karadayi denied, however, knowing anything about the so-called Western Study Group, a gathering of politicians, academics and journalists to fight Islamist fundamentalists, formed with guidance by the military.

Karadayi's former deputy, Cevik Bir, who has been imprisoned for nearly a year for his role in the Feb 28 process, claimed that the military only acted under orders, and that Karadayi had full knowledge of the Western Study Group. Karadayi was brought before the special prosecutor to respond to Bir's testimony. Following a five-hour grilling that included 83 questions, the special prosecutor asked for Karadayi's arrest, but the judge decided to release the former general staff chief because of his advanced age and declining health.

There's a bigger story here, however. There is speculation that the reason these military men are either behind bars or on trial is that the US supports the AKP and/or the Fethullah Gulen group led by a charismatic preacher with teary eyes during his sermons and with millions of followers around the world as well as schools in 140 countries. Fethullah Gulen often expressed his desire of building an Islamic society in Turkey as his goal. From this perspective, these developments aren't aimed at strengthening democracy, but at shifting power in Turkey to the Islamists.

One popular notion among the opponents of the Islamist groups in Turkey is that the US was well aware of the security threat that Wahhabism posed to the West, and that it quickly discovered how to use Fethullah Gulen and his network when he fled to Pennsylvania in 1998 to escape trial on charges of planning to overthrow the Turkish government. One retired Turkish military intelligence officer told Al-Monitor that "No country would allow such a network to find refuge in its territory with a reach out to millions in the Muslim world, and with triple-digit-million dollar budget, and claim that they have no influence over this group. If so, the US intelligence community is not doing its business right, and no one really buys such an argument."

Support from the Gulen cemaati, an Islamic religious group, helped the AKP come to power and stay there. Although it's not clear how many active members the group has in Turkey, it is perceived to have the capacity to mobilize millions of potential voters. It also arguably serves US interests, as it is perceived as an innocent, faith-based group trying to bridge differences between various religions, sects and peoples.

Within Turkey, however, the group's reputation isn't so clean, and the opposition considers it to be the leading machine taking over key intelligence units of the state and spying on individuals. More than 100,000 people have been wiretapped, and fear of speaking out against the Gulen cemaati or the government is rising. The group also maintains a strong media presence, in both newspapers and television. Human rights judges in Strasbourg say Ankara has "the worst press freedom record" in the 47-nation Council of Europe.

Even after a decade in power, the AKP government isn't convinced that those who don't support it respect its legitimacy. Huseyin Ersoz, a lawyer working on the Ergenekon case, told Al-Monitor that, "The AKP government changed the law in a referendum on September 12, 2011, and made it clear that the country's president, prime minister, chief of general staff, and other heads of armed forces can only be put to trial at the Constitution Court. They're violating the law of their own making."

While the list of alleged wrongdoing in these trials is long, a new challenge may be looming: Both within the AKP and in the opposition, many believe Erdogan is falling out with the Fethullah Gulen group, and that clashes between them over power-sharing are on the horizon.

So while many are jailed in the name of strengthening democracy, some are convinced that this process only serves to shift power to other hands, and the prospects for a democratic Turkey remain foggy and worrisome.