The trials of Turkey’s legal system

The AKP-Gulen conflict spills over into the retrial of the Ergenekon case. 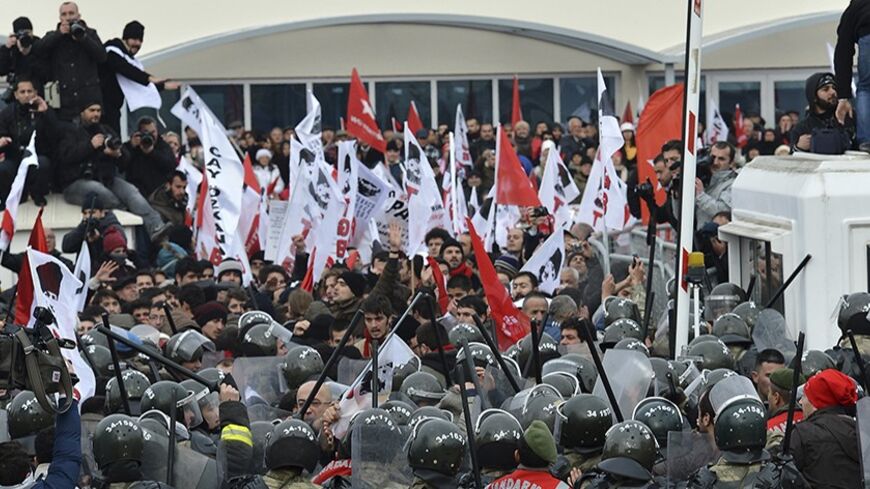 Protesters picketing the trial of nearly 300 people charged with attempting to overthrow Prime Minister Recep Tayyip Erdogan's government are blocked by Turkish soldiers as they try to march to a courthouse near Istanbul, Dec. 13, 2012. - REUTERS/Anadolu Agency

For foreigners, it must be quite discombobulating trying to understand how two distinctly separate legal battles may end up influencing the outcome of the other. It’s not any easier for locals as well to grasp the moment, but this is Turkey — that is what makes it interesting.

Not long ago, Turkish Prime Minister Recep Tayyip Erdogan was proud to assert himself as the “prosecutor” of a series of trials all linked to Ergenekon, defined as a terrorist organization aimed at bringing down his government. More than 200 current and military officers have been convicted and given long prison terms. Until December, Erdogan and his party members were jubilant in their arguments proclaiming how much these trials helped to end the military tutelage in the country and how much it helped to strengthen the country’s democracy.

Times have changed. In December, four of Erdogan’s cabinet ministers came under a suspicious spotlight in a corruption and bribery scandal and resigned or were forced to leave their posts. The prime minister has been arguing since that this is yet another form of a coup initiative, this time by the judiciary, in an attempt to finish him off. Erdogan claims that US-based Sunni religious leader Fethullah Gulen is behind this conspiracy against him, and that he will do all in his power to avert this coup plot, too. So, what does he do?

On Sunday, Jan. 5, Erdogan expressed willingness to throw his political weight behind the retrial of all those convicted military officers behind bars in the Ergenekon-related trials. “Our position on a retrial is a favorable one,” he said. “First, we must establish the legal grounding for fresh trials.” Legally speaking, it is actually not possible to correlate the injustices executed in the Ergenekon trials and the corruption and bribery ring that potentially includes even Erdogan’s family members.

“We have been crying out to be heard since Day One that people’s right to a fair trial was taken away in the Ergenekon and Sledgehammer hearings. If these cases has been filed in a US court, the judges would not have accepted them because the pieces of evidence presented were very circumstantial and unlawful, and we proved all of them to be forgeries. Despite all that, the judge dismissed those facts,” Huseyin Ersoz, a defense lawyer on both the Ergenekon and Sledgehammer cases, told Al-Monitor. “But when these politically motivated courts aimed at the Erdogan government, the prime minister came to understand what we have been talking about.”

The Erdogan government and the members of the Fethullah Gulen religious movement, however, were in a relationship of convenience when they united their forces against the military. They considered it a common enemy to be destroyed. The military considered itself the guarantor of the secular republic and had a firm position against the Islamists and reactionaries, which in many ways violated the norms of freedom from and of religion. In therefore eliminating the military’s tutelage, the government presented it as an absolute success story for the country’s democratization.

“When these cases [Ergenekon] were first filed, the American and the Western media were very positive about it. They were not interested in hearing about any of the mishandling in the process. It’s a different story today, though,” Ersoz said, explaining that not only were the trials politically motivated, but that the political atmosphere internationally put in place by the United States and European Union countries in support of the Erdogan government was also different; that, he argues, also affected the trial process.

In sum, the reason why global and domestic politics impact the country’s courtrooms is that Turkey unfortunately has a weak and vulnerable democracy. It still should be no excuse in being dismissive of any potential injustice to people behind bars, nor should it be used to cover up this graft probe. The point is that when the elites in power abuse the system and use it only to favor their interests, it is inevitable that the system will only get pregnant with bigger and more challenging troubles, and that is what is behind Turkey’s current headache. So, what to do now?

While it remains to be seen how the government will really address this judicial mess of its own making, Ersoz told Al-Monitor that the best way forward is to support the proposal of Metin Feyzioglu, head of Turkey’s Bar Association, and dismiss all the unlawful evidence in the Ergenekon-related trials that led to peoples' convictions. “I believe when this unlawful evidence is put aside, it will be impossible to legally hold these people in jail. There will be no need for any special amnesty or whatsoever. We want people to trust our judiciary system, and therefore we definitely want them to be cleared through our court system — but we need to make sure that they receive a fair trial.”

Feyzioglu, who met separately with both President Abdullah Gul and Erdogan in the last few days, said the government has decided to close the specially authorized courts. “You basically decide against the distribution of a certain medicine, but allow the pharmacies to finish their stocks. That distribution needs to be immediately stopped — just as these specially authorized courts should be no more,” Feyzioglu said. He also took a position against amnesty, stressing that people should get fair trials in the courts.

Clearly, it won’t be easy for any judge to go through hundreds and thousands of pages of an indictment — which in the first place led people to talk about these cases in general terms, and to deny the very fact that a crime or a punishment is a very individual thing where generalization should not be the norm. When challenged about the content and the process of the Ergenekon-related trials, however, the Erdogan government and the pro-government Turkish media used to fire back, “So, you must be supporting the coup!”

Kemal Kilicdaroglu, the leader of the main opposition Republican People’s Party (CHP), therefore cynically asked Erdogan the other day, “Now you are supporting the coup, as well?” It’s true that Erdogan now finds himself in a position to help rescue those military officers behind bars who were convicted of initiating a coup against him — if only to thwart a judiciary coup by an Islamist group, the Fethullah Gulen movement. While it is rationally impossible to sort out all these politically fraught relations, neither freeing the military officers nor preventing a deeper investigation into the corruption and bribery threatening Erdogan’s inner circles is going to be easy for him.