Is the Turkish Military Getting a Fair Trial?

Tulin Daloglu questions whether the Turkish military is getting fair treatment. 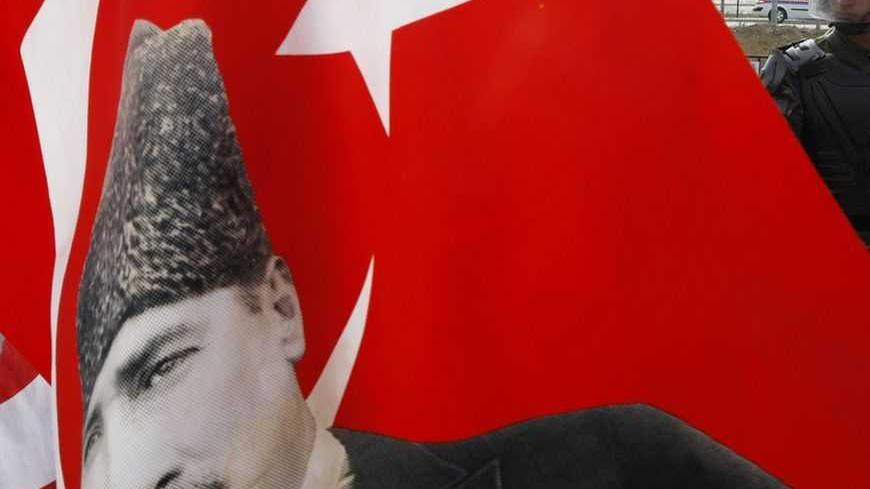 A gendarme soldier stands in front of protesters as a Turkish flag with a portrait of Mustafa Kemal Ataturk, founder of modern Turkey, flutters outside Silivri prison, some 70 km (43.5 miles) west of Istanbul, during the trial of a shadowy-right wing group taking place in the heavily-guarded prison, Oct. 23, 2008. - REUTERS/Fatih Saribas

When something is complicated, and the facts are contested, people oftentimes wait quietly for clarity to emerge. To wit, Turks for the most part have remained silent since the judiciary began putting active and retired officers behind bars to await trial for suspected involvement in Ergenekon, an alleged “terrorist organization” seeking to overthrow the Justice and Development Party (AKP) government. The Turks’ silence is a clear sign of an impasse and possible loss of trust in the military.

“As a retired member of the Turkish military, I attest to you that I am totally disappointed at our nation’s ignorance to the trial process of my colleagues,” Ihsan Aygun, a retired air force brigadier general, recently told Al-Monitor. “I even now question myself as to whether it was worth risking my life for this nation!” Aygun and others have consistently maintained that the Ergenekon trial process has been politicized by a revenge-driven Islamist-based government determined to end “Ataturk’s Turkey.”

In a televised interview on Jan. 25, Prime Minister Recep Tayyip Erdogan expressed concern that the military has been demoralized at a critical juncture in the fight against the Kurdistan Workers Party (PKK) due to the lengthy pretrial detention of hundreds of military officers.

“There are now close to 400 retired and serving officers [in jail]. The most serious are accused of forming terror organizations or belonging to one. If the charges for these are certain, then finish the job,” Erdogan said. “But if there isn’t certainty, then the hundreds of officers should be treated accordingly. This affects the entire morale of the Turkish armed forces. How can these people then fight terror?”

Such remarks serve to further complicate the already complicated and esoteric Ergenekon trials. It is not humanly possible to read the more than 2.5 million pages of documents assembled by prosecutors, and there is no publicly available evidence except digital material whose authenticity is disputed.

The Ergenekon affair has polarized the nation to the point of Turks having to choose between the AKP and the military, as if supporting a soccer team. Erdogan’s remarks, however, suggest that there is a third party involved — a supposedly independent judiciary, though those being prosecuted would disagree with such a characterization. Trust in fair trials and justice has been long gone in Turkey, but what seems to actually exist is a struggle within the Islamist camp between Erdogan supporters and the Fethullah Gulen Cemaati, an Islamic movement that calls for interfaith dialogue and has followers in key state institutions, especially police intelligence and the judiciary. That said, however, one cannot discount the possibility that this seeming Islamist conflict is being put on for show to manipulate public opinion.

While there is no doubt that the Turkish military has at times violated the rule of law in its antiterror activities, and the country would have been better off without the military coups of past decades, the fact remains that in twenty-first century Turkey, the military personnel being prosecuted should have the right to a fair trial and be found guilty or innocent based on the facts alleged in their indictments.

In July 2008, Erdogan called himself “the prosecutor of the Ergenekon,” and he has certainly put his political might behind the state prosecutors tasked with the case. Ilker Basbug, a former chief of the general staff, was arrested in January 2012 at the behest of a special prosecutor on suspicion of “leading a terrorist organization” and sent to Silivri prison. At the time, Erdogan expressed the desire that Basbug be “prosecuted without detention.” He did not, however, attempt to enforce the law that requires that the top political and military leadership be tried in the Constitutional Court. Moreover, he did not sound an alarm over Basbug allegedly being a terrorist. In November 2012, pro-military Turks’ frustration with the special prosecutors spiked when Semdin Sakik, a notorious PKK member imprisoned since 1998, came forward as a key “secret witness” for the state.

Erdogan today expresses concern about the lack of qualified military personnel, but he did not seem worried in July 2011 after the resignation of Isik Kosaner, the chief of the general staff, along with the heads of the army, navy, and air force following the arrest of senior officers for alleged involvement in Ergenekon shortly before a series of promotions. Rather Erdogan changed his tune after Necdet Ozel, the current chief of the general staff, complained that he had not been able to dissuade Adm. Nusret Guner, head of the navy, from resigning, a clear sign of Guner’s frustration with the government and the Ergenekon trials. Erdogan never appeared to question why there are so many naval officers in Silivri prison for supposedly belonging to Ergenekon. The navy never participated in the military coups, but all the key members of the Su Alti Taarruz (SAT), underwater attack commandos, are sitting in Silivri awaiting trial.

Erdogan has always been highly critical of Kemal Kilicdaroglu, leader of the main opposition party, Republican People’s Party (CHP), for questioning the Ergenekon process and expressing skepticism about the independence of the judiciary. After visiting Silivri in January 2012, Kilicdaroglu described the facility as an “open prison,” where the elite “in opposition to the government are gathered.” He said of some members of the judiciary, “I’m personally hard put to call these people judges, because a judge should also be a person with a conscience. Can a judge without a conscience be a judge?” Kilicdaroglu also criticized the lack of compassion shown for prisoners with serious health issues.

Immediately following Kilicdaroglu’s remarks, the state prosecutor’s office handling the Ergenekon trials opened an inquiry into the CHP leader. He also complained about his “questioning the independence of the judiciary” and accused him of “trying to manipulate public opinion” against the Ergenekon process. The effort did not go anywhere, but it added to the fear factor and the mystery of all things considered Ergenekon.

One thing is certain: State prosecutors will not consider Erdogan’s remarks, unlike those of Kilicdaroglu, as an attempt to influence the decision-making processes of the judiciary. This suggests that Turkey is back at square one. There is no standard that the public can apply in examining how the Ergenekon trials are being handled or in trying to understand how the process is supposed to work. Perhaps the judges will ultimately provide some clarity and in doing so help Turkish citizens grasp why the prime minister is complaining about a shortage of military personnel to fight against terror — a situation that would seem to put the nation’s security at risk.