AKP Reacts to US Criticism of Turkey 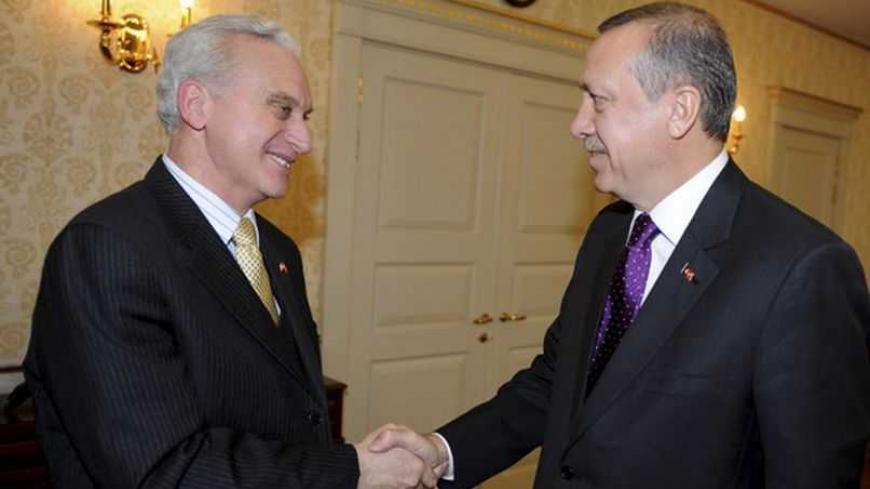 The particulars of Turkish democracy sometimes test the relationship between the United States and Turkey. Without a doubt, among government institutions the judiciary has always had the weakest bond with the Turkish people, who question its independence and thus its legitimacy. Many wonder if equal treatment and fair trials are possible in Turkey. Given the track record of the Turkish judiciary, U.S. ambassadors to Ankara have occasionally been moved to comment on issues concerning the machinations of this branch of government. As everything starts with a point of view, their remarks are sometimes welcomed, but as one might expect, are also sometimes slammed. What makes the difference? Whether they side with or against the ruling party.

Take for instance the differing experiences of Francis J. Ricciardone Jr. and Ross Wilson, current and former U.S. ambassadors to Ankara, respectively, after they made comments on issues concerning the judiciary. In May 2008, Ambassador Wilson remarked on the Constitutional Court case filed by state prosecutors against the Justice and Development Party (AKP), in which they alleged that the party was fomenting anti-secular activities and asked that it be banned from politics. In Ankara, Wilson had said, “We’re also following the case with great interest and a bit of worry. Turkey has strong democratic institutions and traditions. I hope and expect that this case will be resolved in the context of these strong democratic institutions and traditions.” Wilson’s comments were interpreted by some as concern that the verdict might go against the AKP.

Secretary of the State Condoleezza Rice had not publicly urged the court to reject the prosecution’s argument against the AKP, but her constant praise of the AKP government was, not surprisingly, perceived in Ankara as a clear sign of U.S. support for Prime Minister Recep Tayyip Erdogan. At the time, the AKP had been noncommittal about Wilson’s remarks, but the opposition parties criticized the ambassador, accusing him of attempting to influence the court.

At the same time, Rice distanced herself from Turkey’s other notable court case — an (ongoing) effort by state prosecutors to expose the ultra-nationalist, so-called Ergenekon, which they alleged was trying to bring down the government. The state legally designated the group a “terrorist” organization and, to date, has arrested nearly 400 military personnel as well as several high-level civilian government bureaucrats.

Time has moved on. In a speech to Ankara bureau chiefs of the Turkish media on Feb. 5 — four days after the U.S. Embassy had been the target of a suicide bomb attack — Ambassador Ricciardone brought attention to the importance of determining who should be branded a “terrorist” and how the misuse of such labeling can create confusion abroad.

“I do not mean to sound critical, but there is a reality and your leaders have spoken to this reality. The prime minister, the speaker of parliament, the president of Turkey in recent days have spoken to the outcomes from your judicial system that do not seem right to them,” said Ricciardone. In this passage, the ambassador was referring to a Feb. 2 statement by Prime Minister Erdogan, in which he said, “This nation won’t forgive those judges who call [former chief of the general staff Ilker] Basbug a terrorist.” Basbug had been arrested and sent to Silivri prison in January 2012 after being charged with “forming and leading a terrorist organization.” Many in the opposition argue that Erdogan does not believe in what he himself said, but rather, it is what his reading of opinion polls told him he had to say. Had Erdogan been sincere, he would have spoken up immediately in Basbug’s defense.

Ambassador Ricciardone also noted in his speech, “You have members of parliament who have been behind bars for a long time, sometimes on unclear charges. You have your military leaders, who were entrusted with the protection of this country, behind bars as if they were terrorists. You have professors. You have the former head of YOK [High Education Board], who is behind bars on unclear charges evidently relating to him upholding the law when he was a government official 16 years ago. You have non-violent student protestors protesting tuition hikes behind bars. When a legal system produces such results and confuses people like that for terrorists, it makes it hard for American and European courts to match up. We are working to reconcile our legal processes in both countries.”

Turkish government authorities slammed Ricciardone, but steered clear of declaring him a persona non grata. Recalling that Erdogan had called Ricciardone an “amateur diplomat” after similar remarks he made in support of freedom of the press, AKP spokesperson Huseyin Celik asserted on Feb. 6 that the ambassador was attempting to intervene in Turkey’s domestic affairs and that such behavior is neither diplomatic or acceptable. “We are requesting Ricciardone to remain within his boundaries and limits. We’re not pleased with his remarks. We condemn and denounce them,” said Celik. “He should know his place.”

Deputy Prime Minister Bekir Bozdag also weighed in with strong criticism of Ricciardone. “These statements are not in accordance with his job description,” he said. Another deputy prime minister, Bulent Arinc, added his two cents: “There is a problem here related to the ambassador’s personality. ... What’s wrong is this: The ambassador should have known that he is living in Turkey, representing the U.S., and therefore should not have expressed his views on political issues concerning this country. He might have lost the balance in his criticism. In brief, he should not have put himself in a position where we are forced to warn him to know his place.”

Two days after his speech, on Feb. 7, Ricciardone visited the Foreign Ministry and met with Undersecretary Feridun Sinirlioglu. “There is nothing out of the ordinary about this meeting,” T.J. Grubisha, the U.S. Embassy spokesperson in Ankara, told Al-Monitor. “We requested the meeting. They discussed a wide range of issues of interest for both countries. This [situation surrounding his speech] was one of the issues.”

Celik, however, told reporters that Ricciardone had been made aware that his remarks were not well-received and that such an incident should not be repeated. The ambassador sent the AKP spokesman a note along with a copy of the transcript of his speech to the bureau chiefs so his remarks could be read in context.

At the State Department daily briefing on Feb. 7, spokewoman Victoria Nuland did not shy away from the Ricciardone kerfuffle, asserting, “Ambassador Ricciardone was simply repeating what Secretary [Hillary Rodham] Clinton had said, what I’m sure Secretary [John] Kerry will say when he has a chance to speak publicly on these things, that it’s incumbent on Turkey’s friends and allies to continue to respectfully point out the importance of Turkey making steady progress in strengthening the rule of law, strengthening protection of human rights, and of protecting free expression for journalists, for bloggers,” she said. “This is not new from us. We have been quite open, both publicly and privately, in Turkey.”

While a bad taste lingers, the fact is the AKP’s case and the Ergenekon trials are indeed within the realm of Turkish domestic affairs. There should be trust among all Turks that the country’s court system is capable of fairly administering justice, but regardless, the United States should not be attacked for the judiciary’s failures. It would be more meaningful for Turks to debate why Ricciardone and Wilson were met with such different responses over similar court proceedings.