Chill in US-Turkey Ties Will Pass

Semih Idiz analyzes the latest exchanges between the US and Turkey and sees no lasting damage to bilateral ties. 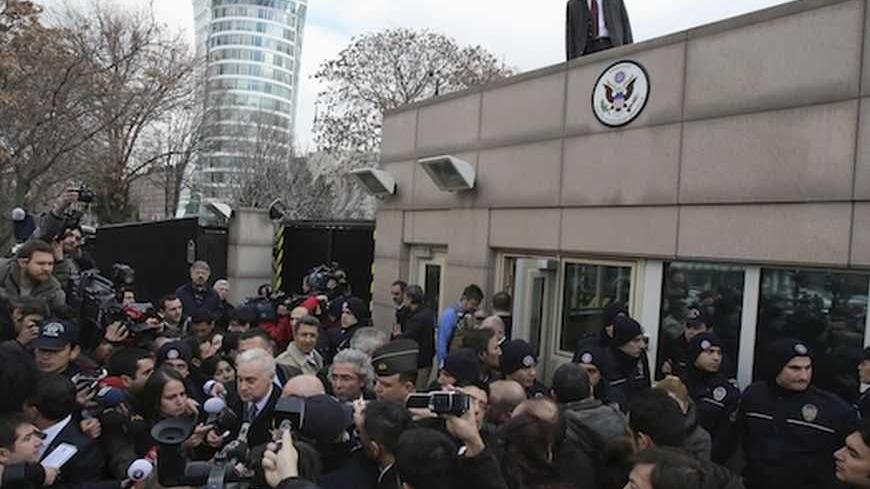 US Ambassador to Turkey Francis Ricciardone (L, with white hair) speaks to media outside of the US Embassy in Ankara, Feb. 1, 2013, in the wake of the suicide bombing at the embassy. - REUTERS

Anyone learning about the subject of Turkish-American relations only this week would be forgiven for assuming that these two countries don't have much love for each other and are headed towards a serious crisis threatening their tenuous ties. They'd be justified in making this assumption, given all the barbs exchanged between Ankara and Washington over these past few days.

But looked at from the perspective of over half a century of strategic and political ties, which have had their ups and downs, any suggestion that Turkish-US ties are in peril would be off the mark. Both countries now rely on each other more than ever, especially in view of the volatility in the Middle East.

Far from falling asunder, the two countries “have come closer than at any time,” according to Namik Tan, Turkey’s ambassador to Washington, speaking to the Turkish daily Hurriyet recently. But this doesn't mean that the sides see eye-to-eye on every issue. Both countries have differences in their policies towards to the region. And there are some touchy topics that trigger angry reactions, as seen over these past few days.

The week started with mutual sympathy in the wake of the deadly suicide attack on the US Embassy in Ankara by the maverick left-wing urban terrorist group, the Revolutionary Peoples’ Liberation Party-Front (DHKP-C). So what soured the mood overnight?

The first sign of trouble came when Victoria Nuland, spokesperson for the US State Department, criticized Prime Minister Recep Tayyip Erdogan and Foreign Minister Ahmet Davutoglu over their recent remarks on Israel.

“Assad could not even throw a pebble when Israeli jets were flying over his palace and playing with the dignity of his country?” Davutoglu told reporters after Israeli jets were said to have hit targets in Syria. Caught between his two pet hates, Davutoglu even suggested that Assad and Israel might have a secret accord. He vowed that Turkey would not stand by and watch as Israel attacked a Muslim country.

For his part, Erdogan — who rarely misses a chance to swing at Israel whether or not it serves any practical purpose — likened Israel to a “spoiled child” and accused it of engaging in “state terrorism.” He has frequently leveled this accusation, to the annoyance of US officials.

Clearly, however, Washington was not prepared to ignore it this time. Israel and its supporters in America have long pressed the US to respond to Ankara's anti-Israeli remarks. It is also worth noting that in March, US President Barack Obama will pay his first foreign visit to Israel since his reelection.

Nuland characterized the statements on Israel by Erdogan and Davutoglu as “inflammatory,” adding that Washington had conveyed its concerns to Ankara. Her remarks received only cursory press coverage in Turkey.

In contrast, remarks earlier in the week by Francis Ricciardone, the US ambassador to Turkey, criticizing the Turkish judicial system — and the Turkish government's strong and insulting response to Ricciardone — were splashed across Turkish papers.

During a meeting in Ankara with the bureau chiefs of leading Turkish papers, Ricciardone had answered a question on the fight against terrorism by criticizing how Turkish laws had been applied. “You have members of Parliament who have been behind bars for a long time, sometimes on unclear charges. You have your military leaders, who were entrusted with the protection of this country, behind bars as if they were terrorists," he said.

He was referring to the hundreds of officers, academics, journalists and politicians who are in prison charged with conspiring to topple the Erdogan government by illegal means. Their court cases are continuing with no apparent end in sight.

Ricciardone pointed out that the same criticism has been levelled by Turkey's prime minister, speaker of parliament, and president in recent days and months. Only recently Erdogan criticised the judiciary for the length of time it was taking the courts to arrive at a verdict in these cases, leaving senior officers languishing in prison.

When similar remarks came from the US ambassador, however, it was too much for the Erdogan government to take. “It appears that although the ambassador speaks Turkish, he has still not been able to free himself from being a rookie ambassador. We hope this will be his final faux pas,” said government spokesman Huseyin Celik.

Shortly after taking up his post in Ankara in January 2001, Ricciardone was lambasted by Erdogan and accused of being a “rookie diplomat,” because he had criticised Turkish restrictions on freedom of the press.

Asking where the American ambassador “got the right to speak this way” on topics concerning Turkey’s domestic affairs, Celik — evidently feeling no need for diplomatic restraint — said that Ricciardone “should first explain Guantanamo to the world,” a reference to the US detention center. Celik also indicated that the American ambassador would be called in for a dressing down.

Ricciardone later went to the foreign ministry, apparently on his own request, in order to thank Turkey for its cooperation over the suicide bomb attack on the US embassy and to discuss regional issues. Foreign ministry sources later told Al-Monitor that while the topic of Ricciardone's remarks about the Turkish judiciary came up, the ambassador didn't receive a “dressing down.”

Ricciardone is no “rookie.” As a seasoned diplomat who has served in Ankara and the region before, he knows Turkey very well. His comments weren't unknown to his administration, and Washington made this clear in its reply to Celik.

“Ambassador Ricciardone was simply repeating what Secretary [of State Hillary] Clinton had said, what I’m sure Secretary [of State John] Kerry will say when he has a chance to speak publicly on these things,” Nuland said in response to a question about Ankara's behavior towards the American ambassador.

She added that it was “incumbent on Turkey’s friends and allies to continue to respectfully point out the importance of Turkey making steady progress in strengthening the rule of law, strengthening protection of human rights and of protecting free expression for journalists, for bloggers.”

Riccardione also received public support within Turkey, as many readers in mainstream papers commented that the ambassador had spoken the truth in criticizing the Turkish judiciary. All of this is annoying for Erdogan and members of his government, but there are other issues which Ankara is also displeased about in its current dealings with the US.

For example, having been marginalized in diplomatic efforts towards Syria, the Erdogan government is displeased that Washington now seems to be supporting suggestions that the Syrian opposition should talk with the Assad regime, if not with Assad himself.

There are other issues as well, such as Turkey’s political and economic ties with the Iraqi Kurds, which are developing independently of Baghdad. Washington feels this weakens efforts to keep Iraq intact territorially, a charge Ankara rejects.

But the question is whether these issues, and this week’s exchange of barbs, jeopardizes Turkish-US ties. If the past 50 years are anything indicator, the answer is no. The current chill between Ankara and Washington is unlikely to last long. These ties have seen, and survived, worse days.