Mustafa Akyol writes that Turkey is pursuing an enlightened regional strategy that is not based upon sectarianism. 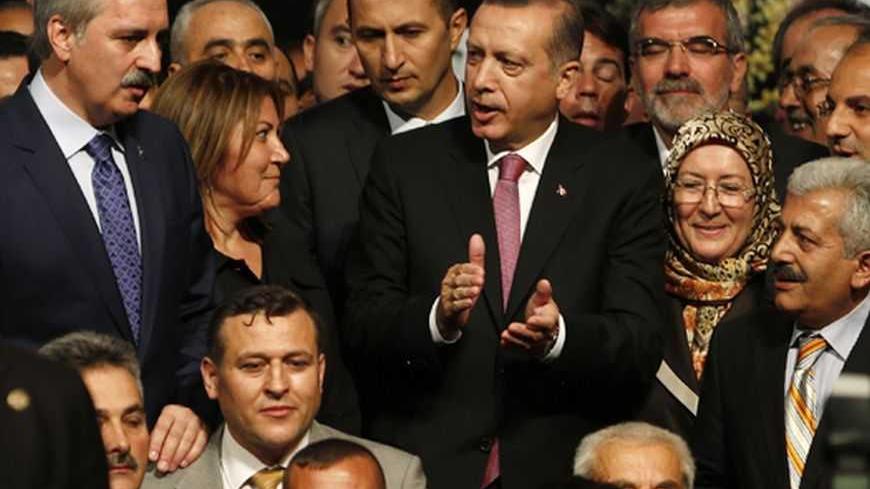 Turkey's Prime Minister Recep Tayyip Erdogan (C), accompanied by Numan Kurtulmus, head of the former Islamist-rooted HAS Party (L), pose with the new members of the Justice and Development Party (AKP) during a party meeting in Istanbul Sep. 22, 2012. - REUTERS/Murad Sezer

One of the criticisms that the Turkish government gets these days, both at home and abroad, is that it follows a "sectarian" foreign policy. According to this claim, Ankara looks at the Middle East with exclusively "Sunni eyes," and thus blindly sides with fellow Sunnis in both Syria and Iraq.

Not only media commentators, but also political actors as prominent as Iraqi Prime Minister Nouri al-Maliki, himself a Shiite, have recently raised this criticism. According to Maliki, posters of Turkish Prime Minister Recep Tayyip Erdogan held by Sunni protestors in Iraq were enough evidence of Turkey's "sectarian extension" into his country. The dictator of Syria, Bashar al-Assad, has also condemned Turkey in the past year and a half for Ankara’s support for "terrorists," which he sees as a product of a Sunni axis of evil.

However, there is something strange about Turkey's "Sunni sectarianism." It seems to have appeared suddenly a little less than two years ago, even though its supposed masters, Erdogan and Turkish Foreign Minister Ahmet Davutoglu, have been in power for more than a decade now.

In fact, until two years ago, Erdogan’s Justice and Development Party (AKP) government was criticized for being too close to Iran, the main Shiite power in the region, and to its key ally, the Assad regime in Syria. As part of Davutoglu’s famed "zero problems with neighbors" foreign policy, Ankara had gradually established very warm ties with both Tehran and Damascus and signed many agreements, including the much-discussed nuclear swap deal with Iran in May 2011. A month later, Turkey even voted against sanctions on Iran in the United Nations Security Council, disappointing its longtime ally, the United States. All of this was quite discomforting for the Western capitals that wanted to isolate Iran and Syria, and many warned about Turkey’s "axis shift." Some observers were even commenting on the rise of an "Iran-Turkey-Syria axis."

Meanwhile, Erdogan was doing his best to diffuse Sunni-Shiite tensions in the Middle East. In March 2011, during an official visit to Iraq, he visited Grand Ayatollah Ali al-Sistani, the spiritual guide of Iraq's Shiites. He also went on the record as the first Sunni leader ever to visit the shrine of Imam Ali. In a previous visit to Iraq three years ago, Erdogan gave an even clearer message of reconciliation: "I am neither Shiite, nor Sunni," he said. "I am a Muslim."

At home, too, Erdogan reached out to the Shiite community, which comprises a tiny minority in an overwhelmingly Sunni nation. In December 2010, he became the first Turkish Prime Minister to join the Karbala commemorations in Istanbul. Meanwhile, Erdogan’s AKP initiated a dialogue with the leaders of the Alevi community in Turkey — who are not identical to the Alawites in Syria, but are similar to them in the sense of being heterodox, Shiite-lite, and essentially secular.

So, we should ask, what has changed? How is it possible that the AKP government was accused of building an "Iran-Turkey-Syria axis" in 2010, but now is blamed for leading an anti-Iranian, anti-Syrian "Sunni axis"?

Of course, one can speculate that the inherent Sunnism of Erdogan and his team asserted itself for no reason.

But a better explanation can be found in the great transformation that has hit the Middle East in the past two years: the Arab Awakening.

From the very beginning, the AKP government has sympathized with and backed the Arab revolutions in Tunisia, Egypt and Libya. There are two main reasons. First, the AKP sees itself as the vanguard of democratization in Turkey and thus supports democratic ideals in the region. Secondly, in all these counties, AKP’s natural sympathies didn't fall with the secular dictators, but instead with the Islamic parties the dictators used to oppress. (In fact, AKP’s own narrative speaks of a "Turkish Spring," by which a secularist dictatorial military was defeated by pious Muslims via democratization.)

Yet when the Arab Awakening began to shake Syria in March 2011, the AKP government first tried to use its friendly ties with the Syrian regime to facilitate a peaceful transition to democracy. Ankara repeatedly tried to persuade Assad not to use violence against peaceful protestors, and instead to initiate credible reforms. In August 2011, Davutoglu made his last trip to Damascus, to give Turkey’s "final word to the Syrian authorities," warning them that attacks on protesters had to "stop immediately and unconditionally."

Yet none of these calls had any affect on the Syrian regime's brutal treatment of its own people. The Turkish government and society were enraged by the horrific accounts of violence reported by Syrian refugees. Erdogan probably also felt personally betrayed by Assad, whom he had befriended and thought "would be different from his father." (The cruelty of the father, Hafez al-Assad, has been well known, and well loathed, in Turkey’s Islamic circles.)

That is the story of why Turkey took a side in Syria's civil war. Ankara saw the conflict as a legitimate uprising for freedom against brutal tyranny, and thus has given its full support to the Syrian opposition — a vision not too different from that of France. (France, however, for some mysterious reason, seems to escape being classified as "Sunni.")

In other words, it would be wrong to believe that bigoted Sunnis in Ankara embarked on an anti-Shiite mission in the Middle East that has left Turkey at odds with central governments in Syria, Iraq, and ultimately in Iran. To the contrary, Ankara has gone to great lengths to avoid the region's sectarianism, but its efforts have not been very fruitful.

However, it would be also wrong to assume that the reality of sectarianism in the Middle East isn't influencing feelings in Ankara and in Turkish society more broadly. The Alawite-Sunni conflict in Syria is creating bitterness between Turkey's Alevis and Sunnis, although violence seems highly improbable. On the other hand, Turkey is indeed beginning to be perceived as a Sunni power in the region.

So if there is one thing Ankara should do about its "Sunni sectarianism," it is to communicate its true intentions: that Ankara isn't really sectarian, and aims for peace, freedom and prosperity for all groups in the Middle East and beyond.