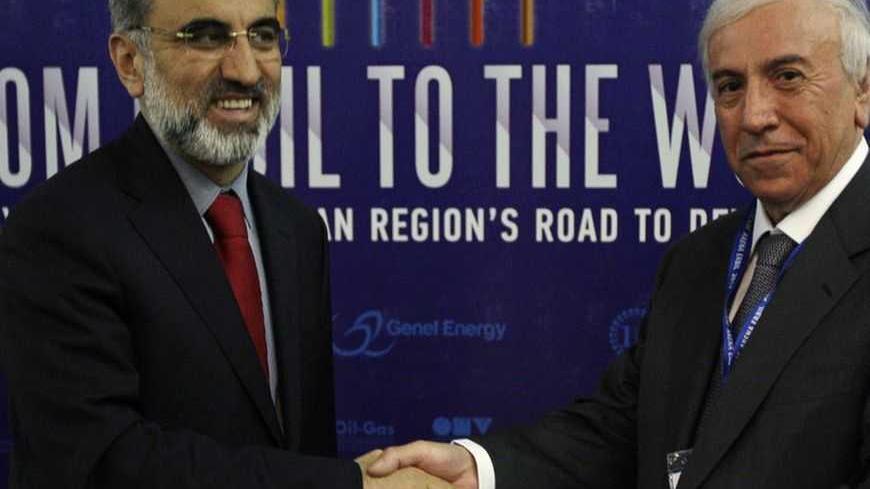 Kurdistan Regional Government Natural Resources Minister Ashti Hawrami (R) shakes hands with Turkey's Energy Minister Taner Yildiz during a joint news conference in Erbil, about 350 km (217 miles) north of Baghdad, May 20,2012. Iraq's autonomous Kurdistan region expects to start exporting oil from its fields along a new pipeline to the Turkish border when the line is complete in August 2013. - REUTERS/Azad Lashkari

“Turkey’s policy is to strengthen economic interdependence with Iraqi Kurds, not to leverage them to independence,” a prominent Turkish official told Al-Monitor.

As Turkish Prime Minister Recep Tayyip Erdogan is trying to bring a closure to Turkey’s Kurdish issue once and for all, his policy also comes under the scrutiny of the neighboring countries.

Turkey has long been vexed by the aspirations for self-determination of the Kurdish people both inside its borders and in neighboring countries.

How strange then that Iraqi Prime Minister Nouri Al-Maliki would complain, as he did on Dec. 31 in an interview with the Someria TV channel, about Turkey's efforts to "divide Iraq" into Arab and Kurdish entities, while pronouncing them a failure.

That was not the first time Maliki was complaining about Turkey’s intimate relationship with the Iraqi Kurdistan Regional Government (KRG). Turkey is “dealing with the (Kurdistan) region as an independent state, and this is rejected by us,” Maliki said in August 2012. If Turkey “wants to establish good relations, its relations with the region must be built through the gate of Iraq.”

At the core of the dispute lie the country’s hydrocarbon wealth and the way to share it, as well as through which oil and gas pipeline route that it will be brought to global markets.  Although Iraq urgently needs to pass a reformed hydrocarbon law, KRG currently relies on the 17 percent share of the federal budget Baghdad allots it — and the state’s main revenue source so far continue to remain as its gas and oil reserves. Since April, KRG has been complaining that the central government has not invested as promised in pipelines, and therefore suspended its supply of oil to export through national pipelines.

As the tension was building, State Department spokesman Victoria Nuland urged in December, “The Iraqi government and the regional administration in Iraq’s north to reach an agreement over legislation so that they can enhance investment so that everybody knows what the fair legal basis is for this.” She also called on Turkey and other “neighboring states” to “similarly avoid any action or comment that could contribute in any way to increasing tensions.”

That said, Turkey appears to have now fully thrown its lot with Iraqi Kurds in their struggle with the Baghdad government. Turkish Prime Minister Erdogan’s government is discussing hydrocarbon agreements with Iraqi Kurdistan, defying warnings that all contracts governing oil and natural-gas revenue should be approved by Baghdad, although stopping short of closing these deals.

Ankara argues that they need the Iraqi Kurdish option as a potential benefit from the rich hydrocarbon reserves in the north of the country, even though the Shiite-dominated Iraqi oil and natural-gas fields in the south are where the nation's real wealth is. “The geography is clear,” the Turkish government source tells. “It’s only the oil and gas in the north that can go through Turkey. We’re not cutting our interests short by engaging with the Kurdish region, and in fact, we have also tried investments in the South, as well. They were however all already parceled out, and we could not really take a role there.”

“Prime Minister Erdogan strongly believes that once the economic ties are truly blended with the Iraqi Kurdish region, the PKK terror will naturally come to an end.” Asking to remain anonymous due to the sensitivity of the topic, this government source told Al-Monitor, “Although people may assume that we’re actually enhancing the possibilities of Iraqi Kurds break up from the rest of the country, everyone indeed knows the truth.” He went on to say this: “Turkey is trying to assure that Iraq’s federal government finally passes a reformed hydrocarbon law, where the Kurdish region fully agrees to settle for the 17% share of the federal budget Baghdad allots it. Once Baghdad solves the money issue, there remains no reason for them to object to Turkey’s cooperation with the Iraqi Kurds.”

“It seems to us that the American administration does not yet want the Iraqi hydrocarbon to come to the global markets,” this source said. “But ExxonMobil and other giant companies have already put their feet in the field. This is now all a matter of timing, and as Turkey, we don’t want to be left out.”

Still though, it was a real embarrassment for Turkey when Baghdad denied direct-flight permission to a private plane carrying Turkish Energy Minister Taner Yildiz to attend an energy conference in Erbil on Dec. 4. And that it’s also possible that Erdogan’s Iraqi Kurdish policy may not succeed.

“There are many actors now who will try to do its best for Turkey to fail in its vision. Iran comes to mind as one potential country, that may provoke Maliki against Turkey, for instance,” the same government source claimed.

Ankara bristled when Maliki said in the interview that Turkey will fall apart under Erdogan's rule, and that Bashar al-Assad will not be brought down in Syria. Clearly, not everyone is going to get all they want as the region goes through an exceptional time in which the rules of the geo-strategic game are re-drawn.

Tulin Daloglu is a columnist for Al-Monitor's Turkey Pulse. She has written extensively for various Turkish and American publications, including The New York Times, International Herald Tribune, The Middle East Times, Foreign Policy, The Daily Star (Lebanon) and the SAIS Turkey Analyst Report. She also had a regular column at The Washington Times for almost four years. In the 2002 general election, Daloglu ran for a seat in the Turkish parliament as a member of the New Turkey Party. She earned BS and MA degrees in international relations at the Bilkent University in Ankara, Turkey, and completed an MA degree in journalism and public affairs at American University in Washington, D.C.