Dealing with Ocalan Not Enough For Erdogan

Kadri Gursel writes that whether the Turkish government’s intention is to stall for time with Ocalan to secure another violence-free election period or whether it is truly an intention to solve the Kurdish issue, the task of the AKP is a formidable one. 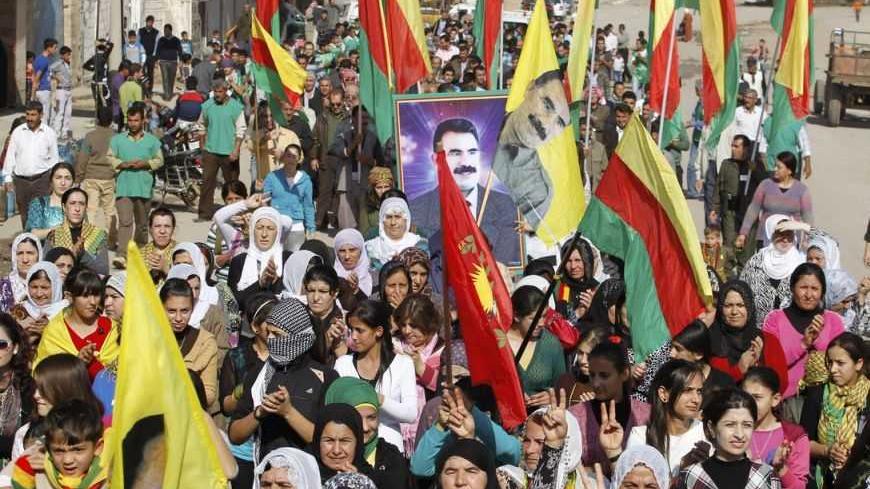 The AKP government has revealed that it has been in secret talks with the PKK’s founding leader Abdullah Ocalan, now serving a life sentence, aiming at PKK giving up its arms.

This is not a surprising development for those who understand that 2013 will be the year compelling Turkey to take steps to silence the guns.

Turkey is under pressure of time for two reasons: First is the regionalization of the Kurdish issue because of Syrian events. The first consequence of this trend is that Turkey’s Kurdish issue is not anymore a bilateral affair between the state of Turkey and the PKK.

As of now, the Baath regime in Syria, the Syrian Kurds and of course the PYD which is the PKK’s extension in that country, Maliki government in Baghdad, Kurdistan Regional Government in northern Iraq and Iran are all third parties that can have more bearing than before on the progress of  Turkey’s Kurdish issue.

The leadership of the PKK’s military wing based in Kandil region of the northern Iraq’s Zagros Mountains is open to deals with these third parties far more than before. Another factor that concerns Ankara is the experiment with autonomy in Syria under actual lead of the PYD which is identified as the  PKK’s arm in that country. As this experiment gains momentum, it forces Ankara to end its clash with the PKK soonest but it also strengthens the negotiating hand of the PKK vis-à-vis the Turkish state.

Ankara has two options to prevent the use of the PKK against Turkey in the current regional context: To change the Syrian policy or to end the struggle with the PKK. Ankara is trying the latter.

The second  reason that requires Turkey to take steps now is the approaching elections in Turkey, starting in spring of 2014 that are vital to the future of the AKP rule and realization of  the Prime Minister’s political aspirations.

There will be local elections in March 2014. In September, the Turkish president will be elected directly by the people for the first time and the only candidate that is guaranteed to run so far is Erdogan.

In June 2015 there will be parliamentary elections. In the meanwhile Erdogan’s wish to introduce presidential system could direct the AKP government to initiate some unilateral and unexpected constitutional amendments in the parliament. That is a possibility. If this comes about, Turkey must be ready for a strategic and historical landmark constitutional amendment referendum in the second half of 2013.

It is essential for the AKP rule and Erdogan’s success at the polls for these elections be carried out in calm atmospheres. AKP rulers were able to move through the 2009 local elections, 2010 constitutional amendment referendum and 2011 general elections without PKK violence. Obviously, although since collapsed, the Kurdish opening of 2009 and contacts between the Turkish intelligence services and the PKK at Oslo helped the elections to proceed with minimal violence.

AKP’s  2009  ‘’opening to Kurds’’ and series of secret meetings Turkish intelligence services held with the PKK in Oslo, if nothing, helped AKP to pass through the elections in a non-violent atmosphere.

Kurdish politicians and PKK spokesmen claimed at that time that AKP stalled them just for a quiet election period. Ankara’s latest efforts to have the PKK give up its arms through talks with Ocalan now  converges with regionalization of the Kurdish issue and the upcoming elections calendar.

Then, why is Turkish government opting to negotiate with a leader in prison instead of military wing leaders in northern Iraq?

Answer to this was in a statement Erdogan’s chief adviser Yalcin Erdogan gave to daily Milliyet on 29 December: “Ocalan is still an important figure in the PKK. Apo [Ocalan’s popular name] who has been made into a mythological character may not have a practical purpose but he is still an important part of the emotional make up of the organization. Nobody would dare to challenge him.”

Akdogan wasn’t exaggerating. The open-ended hunger strike by hundreds of the pro-Kurdish detainees in Turkish prisons ended when Abdullah Ocalan made a public appeal via his brother.

The prisoners who kept up their strike for 67 days were asking the courts for the right of defending themselves in Kurdish, education in their mother tongues and end to one a half year isolation of Ocalan in prison.

Here we have to recall that that Ocalan was banned from meeting with his lawyers in July 2011 after a PKK attack that killed 13 soldiers in the Kurdish-majority southeast. That restriction has remained in force since then.

Ocalan’s plea finished the hunger strike that was nearing deaths but none of the demands of the Kurdish detainees, including ending of the isolation of their leader, was met.

Here we once again encounter the reality: Ocalan’s authority over the organization he founded and its support base is still robust.

Previously we knew that Ocalan was guiding the organization if not running it with instructions he was sending out via his lawyers. The policy of the government to isolate Ocalan for the last 18 months was to remove him from the scene as a political actor.

It was an unrealistic policy with low probability of succeeding. It became totally meaningless with the regionalization of Turkey’s Kurdish issue.

There is a good reason for that:  Ocalan is the sole local political asset in the government’s hand in an environment where external actors can become a party and Kandil military leadership can easily enter into arrangements with those actors. Although Ocalan’s power reaffirmed with his single call that terminated the hunger strike, Turkish government still wants to use its “asset” for its own political agenda and its ends.

Turkish government spokesmen, led by Prime Minister Erdogan while saying their goal is to have the PKK give up its arms, don’t mention “solution to the Kurdish issue.” This could well be a conscious decision to avoid frightening the Turkish public opinion.

Even if that is the case, there is a question that must be asked: Will it be possible to have the ones in the mountains give up their guns without offering a peaceful and political solution perspective?

Methods that did not have a political perspective did not achieve giving up of arms until now. If the government is not intending to offer a serious and convincing solution perspective and discuss giving up of arms after taking mutual confidence building steps, it won’t be easy even with Ocalan’s support.

Remarks by Murat Karayilan , the head of the PKK military at Kandil, last Friday were enough to discourage excessive optimism. As a precondition to negotiations Karayilan wants Ocalan to be moved to house arrest and facilities for direct contacts between themselves and Ocalan. He declaraed the PKK will not withdraw its forces from Turkey without first seeing government’s concrete proposals for a solution and its assurances.

In sum, any movement towards a solution of the Kurdish issue under today’s circumstances seem improbable unless Turkey’s political structure changes.

Whether the Turkish government’s intention is to stall for time with Ocalan to secure another violence-free election period or whether it is truly an intention to solve the Kurdish issue with Ocalan, the task of the AKP is a formidable one.