Kadri Gursel writes that the current talks between the Turkish government and Abdullah Ocalan, the imprisoned head of the Kurdistan Workers' Party (PKK), cannot disentangle the problem of PKK terrorism from a political solution to Turkey's Kurdish issue. 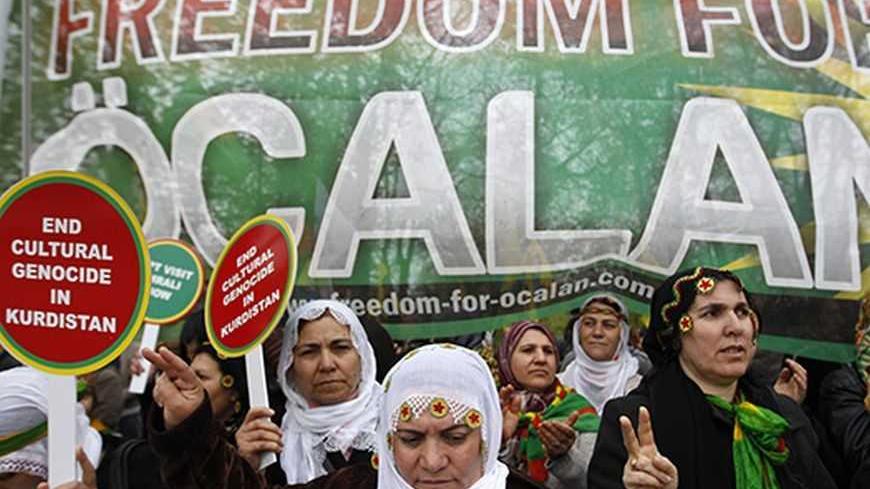 Turkish Prime Minister Recep Tayyip Erdogan’s government has been negotiating with Abdullah Ocalan, the founding head of the Kurdistan Workers' Party (PKK) who is serving a life sentence in prison. Turkey's mainstream media has labeled these negotiations “the Imrali process.” This so-called "process" has yet to pave the way for peace negotiations with the PKK.

Of course, it is impossible to solve the issue by speaking only with an isolated Ocalan. It is indisputable that there will be no progress unless the negotiation process includes — directly or indirectly — the political and military wings of the Kurdish movement.

It will be hard to transform the Imrali process into a real peace process as long as operations continue against the PKK.

But first, this question needs a clear answer: What does Erdogan want to achieve in this process? What is his objective? Is it to solve the Kurdish question — Turkey’s most difficult, complicated problem? Or is it to use negotiations to end the PKK terror — which the Turkish state hasn't been able to eliminate in 30 years of military operations?

Which one? The Kurdish issue or the terror issue?

In fact, Turkey is wasting time debating this misguided dilemma. There is no choice. If you ignore the cause-effect relationship between the Kurdish issue and terror, it's impossible to resolve either issue.

Since the government announced its meetings with Ocalan, all government spokesmen, including the Prime Minister, have described the objective of the Imrali process as being “for the PKK to give up its arms.”

But this raises a huge question for those who know that the PKK will never give up its arms without being offered a political solution to the Kurdish issue.

As such, it's merely an assumption that the government truly wants to solve the Kurdish issue this time around. Erdogan’s statements and actions have vinicated those who doubt that the Imrali process could become a true peace process.

Erdogan declaration that “PKK’s giving up arms” is a precondition forms an integral part of his political stance.

On Jan. 22, the Prime Minister, addressing the armed PKK militants in the mountains of the southeast from the rostrum of the parliament, said: “If you are sincere, if you are honest, you will abandon your weapons. If you don’t want to live in this country, you can go to whatever country you want. I gave the necessary assurances for this. We will do everything possible as the [Justice and Development Party] (AKP) not to allow a repeat of earlier incidents along our border.”

What the Prime Minister means by “earlier incidents along our borders" is Turkish security forces' attack which killed hundreds of PKK militants who were withdrawing from Turkey to northern Iraq following Ocalan's capture.

The spokesmen of the PKK’s military wing ask what assurances the Turkish government offers in exchange for giving up arms. What they clearly mean is the constitutional and administrative reorganization of Turkey in a way that would bring about a political solution to the Kurdish issue. Otherwise, the PKK faces no time pressure for giving up its arms.

Erdogan's guarantee is only that PKK members will not be killed when crossing the border. The PKK wants a solution to the Kurdish issue, but Erdogan offers only a “solution to the terror question.” This is why the so-called Imrali negotiations face a political impasse.

Erdogan has a target of “disarming the PKK." He feels compelled to achieve this in the first half of 2013. One reason for this urgency is to block any threats to country's stability from the regionalization of the Kurdish issue. Another reason is his and his party's political agenda. Turkey will have three important elections in 2014 and 2015. In 2014, we have local and presidential elections, and general elections in 2015.

Naturally the government wants elections to take place in a non-violent atmosphere. But before that, Erdogan aspires to introuce an executive presidential system. This requires a constitutional amendment that can only be done through a referendum. The last practical date for such referendum is the last quarter of 2013.

The ruling party doesn’t have enough parliamentary seats to unilaterally succeed in introducing a constitutional amendment and submitting it to a referendum. The only legitimate way to do it is to get the support of the Kurdish party.

But at what price?

All these are complex question awaiting answers.

Erdogan is making a gross mistake by linking his political agenda with disarming the PKK. He is under time pressure, but the PKK is not. As a result, there is now an asymmetry favoring the PKK.

What is right is to separate these agendas and to allow adequate time to resolve the Kurdish issue, without linking it to personal political agendas.

When you separate the two, the likelihood of solving the Kurdish issue will be enhanced. When you combine them, you may end up with nothing.