Palestinians thrown into Israeli prisons are deprived of the rights their Israeli counterparts receive, with families often kept apart for decades with no hope of reuniting, writes Linah Alsaafin. 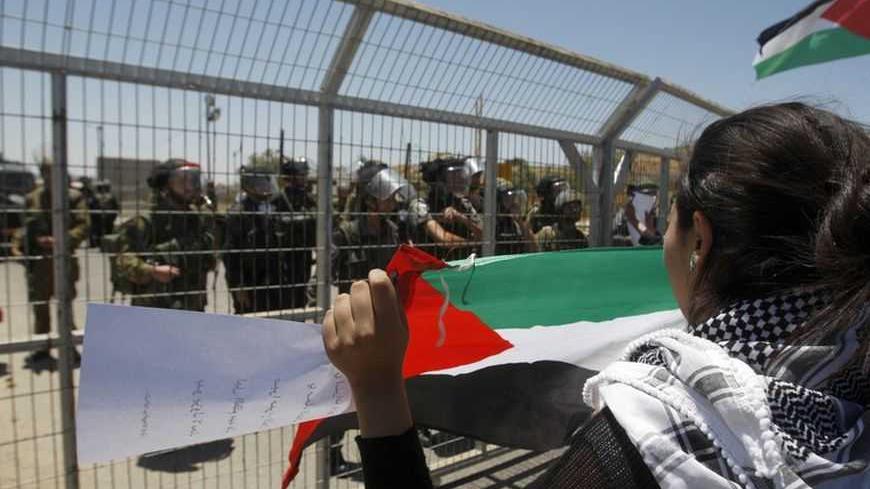 A Palestinian protester holds a flag in front of Israeli soldiers and border police during a protest outside Ofer Prison near the West Bank city of Ramallah, marking the anniversary of the 1967 Six-Day War, June 5, 2012. - REUTERS/Mohamad Torokman

Majd Ziada, 29 years old, hasn’t seen his parents and two sisters for over a decade. He was put in prison at the age of 19 during the Second Intifada in 2002 with a 15-year sentence after the Israeli government accused him of being a member of the Al-Aqsa Martyrs Brigades, Fatah’s armed resistance wing.

At his appeal in an Israeli military courtroom, Majd gave a defiant statement against the occupation, which resulted in another 15 years added to his sentence:

Majd’s mother, 59-year-old Lutfiya, was diagnosed last year with breast cancer. She initially refused chemotherapy and doctor-prescribed medicine, and instead focused on treating herself through healthy eating, organic food and herbs. In one instance, Israeli authorities, on no reasonable claim, confiscated a nutritional package sent to her by a doctor from the U.S. by post.

Before finally submitting to chemotherapy, Lutfiya spent most of her time bedridden, too weak to move, clinging to one burning thought: having her firstborn back at her side.

“If I can just put my arms around Majd, I will get better,” she would murmur over and over again

For 50 days after his arrest on April 2, 2002, no one had any information about Majd’s whereabouts or conditions. His mother would go to Ofer prison on the outskirts of Ramallah and stand at the gate for long hours, tears streaming down her face as she tried to catch a glimpse of Majd’s shirt, the back of his head, to grasp clues from other prisoners’ conversations on Majd, all to no avail. The family finally found out from a newspaper that Majd was being held in an Israeli prison and had been severely beaten in custody.

The ten years since her son was put in prison have taken a deep toll on Lutfiya’s well-being. Her mental and physical health began to deteriorate after Majd was put behind bars, making her almost unrecognizable from the energetic, strong-willed, active woman she used to be. She had excelled at her job at an insurance company and received yearly bonuses for her hard work. The sudden blow of not being able to see her son (especially after being prevented from visiting him during the Second Intifada) led to fitful nights for the family, who had to endure Lutfiya’s sobs for hours on end. She couldn’t focus on work anymore, and was prone to memory lapses, such as forgetting where she had parked the car.

Lutfiya tried to find solace in yoga, but in 2008 a severe stroke nearly destroyed her spirits.

“Majd and my mother’s relationship was really strong even before he was arrested,” his sister Hurriyah, 23, said. “All his letters when he was first imprisoned were addressed to my mother. … Majd is what ties her to this world.”

Family visits to prisoners are granted every two weeks for only two members of each family, but due to her health Lutfiya has not visited her son in Nafha prison — known for its notoriously harsh conditions and desert heat — in two years.

In the summer of 2012, Hurriyah embarked on a campaign to reunite her mother and brother. Along with her older sister Raya and their father Mahmoud, the family is demanding the release of Majd, currently held in Nafha prison, to remain at his mother’s side until she recovers.

Palestinian prisoners inside Israeli jails are typically prevented from such luxuries even if it is a life or death matter. The few known cases, such as Sa’ed Salameh, who was briefly released to attend his mother’s funeral before returning to jail, and Palestinian writer and academic Ahmad Qatamesh, who was granted a few hours with his sick mother, are not a common practice allowed by the Israeli Prison Service

The discrepancy between Israel’s treatment of Palestinians and Israelis under its law is based on two completely different systems. Palestinians from the West Bank and Gaza Strip are unequivocally tried by military courts no matter what their offense (if any), whereas Jewish citizens of Israel are tried in either civil or security courts. In any case, Israelis are always treated better than Palestinians and are allowed special privileges of which Palestinians can merely dream.

One such example is Ami Popper. Popper was an Israeli soldier who murdered seven Palestinians in the First Intifada. He was tried in military court and sentenced to seven life sentences. Later the sentence was lessened to 40 years. During his imprisonment, Popper was permitted more than a hundred vacations outside of prison, enabling him to get married and other such freedoms. During one of these vacations, he was driving the car that killed his wife and one of his sons.

Labib Habib, the lawyer who recently took on Majd’s case, told Al-Monitor that such visits are indeed rare, but not unheard of.

“It is not impossible for prisoners to have their sick family members [provided that they are of first-degree relations] visit them without a glass barrier between them,” he said. “In some cases, we even have prisoners who get to go home for a few days before going back to prison, as was the situation with Bassem Tamimi who was released in April for two days to visit his ailing mother in Ramallah Hospital.”

Habib argues that such visits do not differ much if the prisoner is an administrative detainee (held without charge subject to indefinite renewal) and a sentenced prisoner. “The principal is the same,” he said.

“Of course, it’s harder for a prisoner who is sentenced to thirty years, like Majd, but now we are working towards getting Majd’s mother to visit him at least once a month in Ofer.”

The International Committee of the Red Cross, after securing permission from the Israeli Prison Service, finally granted Lutfiya her wish.

On Oct. 16, 2012, after Majd was moved from Nafha prison in the Naqab desert to Ofer prison just outside of Ramallah, Lutfiya, accompanied by Mahmoud, reached the prison in an ambulance in the morning. Majd was waiting for their arrival in a room, in anticipation for the moment he would be able to hold his mother in his arms for the first time in over a decade.

However, the Israeli Prison Service authorities at the last minute aggressively prevented Mahmoud from entering the room, much to the distress of Lutfiya.

The first moment of reunion was filled with bittersweet tears on Lutfiya’s part at the pain of Mahmoud banned from seeing his son, and jokes made by Majd in order to lighten the mood and to see her smile. The visit lasted for only 45 minutes.

Regardless of her situation, Lutfiya remains hopeful she will see Majd once again in the comfort of their home. She draws her strength from her unwavering belief that she will be surrounded by all of her children and grandchildren, reflected in a picture she drew of three houses encircling hers. When the pain in her body is at its peak, she repeats one of Majd’s sayings to herself: “The most beautiful days have not yet come.”