A Palestinian Mother’s Heartache For Her Imprisoned Son

Palestinian filmmaker Suheir Farraj wrote an emotional Facebook message to her jailed son, who remains behind Israeli bars for belonging to the PFLP. 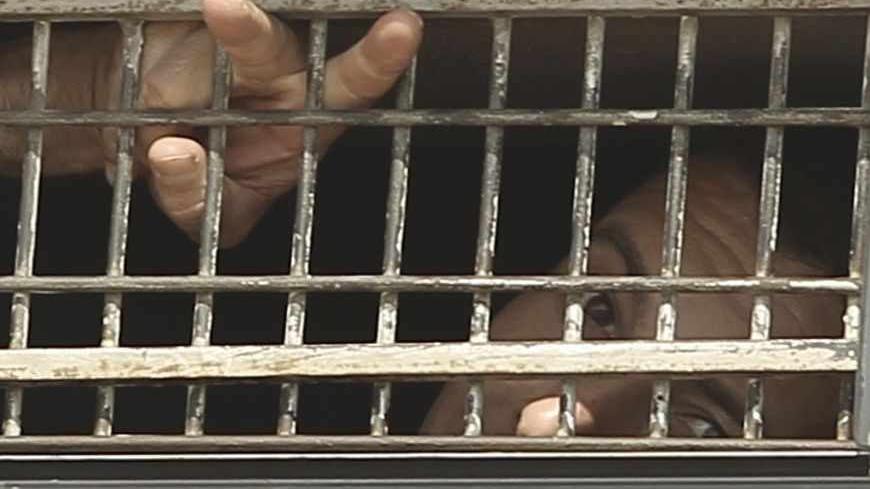 A Palestinian prisoner gestures from the window of a bus as it leaves Nafha Prison near the southern Israeli town of Mitzpe Ramon, Oct. 16, 2011. - REUTERS/Ilan Assayag

The effects of decades-old occupation are often debated in public events in a cold and unemotional way. The reality for people living the occupation is a totally different story.

Writing on her Facebook page this week, Suheir Farraj talks about the conviction of her son Ismail by an Israeli military judge for the huge crime of belonging to the Popular Front for the Liberation of Palestine (PFLP).

The legal status of the PFLP, one of the main factions of the Palestine Liberation Organization (PLO) is confusing. On the one hand, the PFLP through its membership in the PLO has recognized Israel and has ceased its guerrilla activities against Israel.  After Oslo, a number of the PFLP’s leadership abroad were allowed to return. PFLP Secretary-General Abu Ali Mustafa was allowed to return by Israel in 1999 only to be assassinated by Israel in August 2001.

Israel has never officially taken the PFLP off its list of “terrorist” organizations. So an act as simple as setting up chairs at a PFLP rally at a local Palestinian university, which Ismail is accused of, is considered a crime by the Israeli occupiers.

This week, 20 months after being literally kidnapped from his home in the Dheisheh refugee camp within the Bethlehem district in area A, Ismail Farraj, 22, was convicted of membership in a terrorist organization and given the steep sentence of 23 months in jail and a further suspended term of 10 months.

In her moving reflection on her Facebook page, Suheir relates how difficult the past 20 months have been. During this period, she and her husband were barred from visiting their son in jail for undeclared "security" reasons. Suheir, who runs a successful women’s media NGO, Ilam Tam, is regularly allowed to travel abroad and return without any legal restrictions. Her husband, Najeeb Farraj, a respected local journalist with a French news agency, is also permitted to travel.

In her heart-rendering prose, Suheir explains how the family’s only communication with their son is through their teenage daughter, the only member of the family allowed to see Ismail as part of the international legally obligatory family visits. She talks about the 14-hour ordeal of traveling to the prison in the southern Negev (al-Naqab) desert, which her daughter says is forgotten the moment she sees her brother. The only other time of contact, Suheir says, is during the convening of the court, and even in those instances touching and talking to their imprisoned son is not permitted.

His family stated in press reports at the time that in the early hours of Oct. 10, 2011, Israeli soldiers entered quietly and apparently without coordination to areas under Palestinian security rule. Special units of the Israeli army then broke into the Farraj home in Dheisheh camp, which is close to the Bethlehem-Hebron road, and took the young Ismail, pushing aside his protesting family. Family lawyers say he was not accused of any violent act.

Ismail was initially held at the Ofer detention facility near Ramallah, but he was later moved after a hunger strike to Nafha prison in the south of Israel. Only his sisters, Lamis, 17, and Ruba, 14, are allowed to see him.

What was most upsetting to Ismail and his family during the first year of detention was the relatively new Israeli policy under Prime Minister Benjamin Netanyahu that bans books from prisons and detention centers. Reports said at the time that the Israeli authorities restrict the number of books, and of those, only textbooks are allowed.

When Ismail was brought to a hearing, a year ago, he told his family that he wishes they could get him a world atlas, which apparently is allowed under this puzzling textbook policy. Ismail and other prisoners went on hunger strike in April 2012 and after that, the book restriction policy was slightly eased.

In concluding her touching Facebook commentary, Suheir looks forward to the day in three months when her son will be released, their family reunited and welcomed noise returns to their home:

“Life will come back to our home soon, my spirit will return to my chest, our sun will rise again, I will see your face every morning and come back home every evening: your chaos, your voice, your laugh, your friends outside of prison and your friends who are still in prison.  You and your friends are the beacon of this country and the spirit that we live by. You are welcome and your friends, waiting for you eagerly.”