It remains unclear whether tentative steps will lead to a genuine unification of the fractured Palestinian national movement. 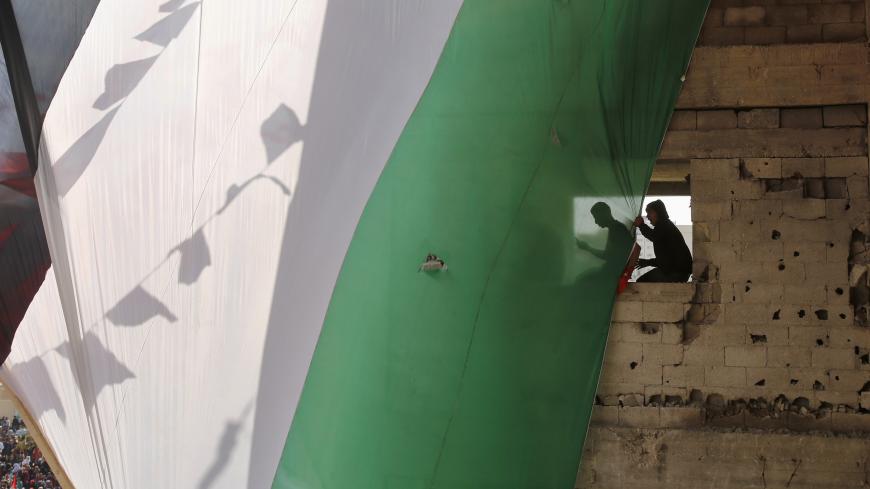 Palestinians look out a window of a building previously damaged by Israeli airstrikes during a rally marking the 46th anniversary of the founding of the Popular Front for the Liberation of Palestine, in Gaza City, Gaza, Dec. 7, 2013. - REUTERS/Suhaib Salem

The fractured Palestinian national movement received a small positive jolt recently when a left-wing Palestinian Liberation Organization leader smuggled a reconciliation letter from jail to the Palestinian president. Ahmad Saadat, the leader of the Palestine Front for the Liberation of Palestine (PFLP), called for a serious renewal of unity talks. The letter has sparked guarded hopes for movement on the stalled Palestinian unity talks. A high-level meeting is planned May 16 at the Ramallah presidential headquarters.

Laila Khaled, a member of the PFLP’s politburo who lives in exile in Amman, Jordan, told Al-Monitor that the time for talk is over and that serious decisions need to be made. “We need to stop talking and begin acting. If President [Mahmoud] Abbas agrees to work on a new strategy for standing up to the occupiers, we are on the right track,” she said.

Khaled, who was involved in Palestinian resistance action in the 1970s, realizes that time is of the essence if the new strategy is expected to counter Israeli right-wing efforts to annex parts of the occupied Palestinian territories. “We are seeing a strong response from the European Union, from members of the British Parliament and even from the US Congress; we need to rise up to the challenge because the annexation will end any remaining chance for peace.”

In his letter from jail, Saadat says, “I assure the president and our brothers in Fatah that the atmosphere within the leadership of the Front [PFLP] is ready for a positive serious interaction for bilateral dialogue that can lead to overcoming financial difficulties, which we see as small in comparison with the national challenges facing our people.”

Usama Qawasmeh, a Fatah spokesman, told the London-based Arabi21 news website May 10 that Saadat's letter was well received. “We also see a positive atmosphere [for unity] and the letter from Ahmad Saadat has had a very big effect and has moved the still waters toward dialogue and unity.”

The letter and the positive reaction from the president and his Fatah movement have, however, failed to convince many skeptics about the chances for true reconciliation.

Hani al-Masri, the head of the Palestinian Center for Strategic Studies - Masarat in Ramallah, is concerned that the Fatah response is nothing more than lip service. “The chances for a real national unity breakthrough are still weak, the responses to the letter are routine and the reality is that there are little signs of a serious change on the ground.”

Suheir Ismael, the general director of Women Media and Development / TAM organization who lives in the Dheisheh refugee camp outside Bethlehem, told Al-Monitor that the PFLP letter will do little to break up the major division between Fatah and Hamas. “There is no political will among those two groups for reconciliation as leaders of both major groups prefer the status quo than any change.”

Mohammad Younis, a Ramallah-based journalist who is well informed on internal Palestinian issues, also is doubtful about Abbas' sincerity toward unity. “President Abbas is not a unity person nor does he believe in collective leadership. He has pushed [Nasser] al-Qudwa and [Jibril] Rajoub aside and has limited himself to a small group of leaders such as Majed Faraj and Hussein Sheikh. He is an old man who doesn’t accept change and is unwilling to bear the burden of unity with a strong side like Hamas.”

Kamel Jbeil, a left-wing activist from the Amari refugee camp near Ramallah, said, “There are still huge obstacles, mainly that the Fatah leaders are holding onto their positions and will not heed what the president wants.”

Hamas, which is embroiled in time-sensitive multilateral talks about a prisoner exchange deal with Israel (which might include the PFLP’s Saadat and Fatah’s Marwan Barghouti), has not commented on Saadat’s letter.

According to a May 13 report in the Saudi daily Asharq al-Awsat, Abbas has decided to expand the talks to include all Palestinian factions with the aim of working out a new strategy to confront the expected Israeli push toward annexing parts of the occupied Palestinian territories.

Asharq al-Awsat quoted Sabri Sadem, a member of the Fatah Central Committee from Gaza (currently living in Ramallah), as saying that Hamas and the Islamic Jihad have been invited to the widened national unity meeting that is expected to be held at the presidential headquarters in Ramallah on May 16.

Ahmad Majdalani, a member of the PLO’s Executive Committee, said both Hamas and the Islamic Jihad have said they will attend the meeting, which will deal with the new Palestinian strategy. “A subcommittee of the [PLO’s] Executive Committee and the Fatah Central Committee are preparing the groundwork for that meeting, which will include new steps of transitioning from an authority to a state. The current phases are over and therefore we need to prepare the legal and political steps needed to make the move and open a new page that will accentuate sovereignty of the Palestinian state on the 1967 occupied Palestinian territories,” Majdalani said, according to Asharq al-Awsat.

The idea of declaring a state under occupation was voted on in the Palestinian National Council in May 2018, but its implementation was delayed because of the high cost it will have, Majdalani added.

Palestinian Prime Minister Mohammad Shtayyeh echoed the same sentiment by saying at a Cabinet meeting May 12 that the international community needs to respond to Israeli annexation actions by “boycotting Israel and recognizing the Palestinian state on the borders of 1967.”

It is still unclear how far the unity talks will reach and whether they will be limited to the factions within the PLO or whether they will encompass major factions such as Hamas and the Islamic Jihad. The dangers to the entire Palestinian national cause require a major response; national unity is important but would only be the beginning of a serious response to Israeli expansionism.