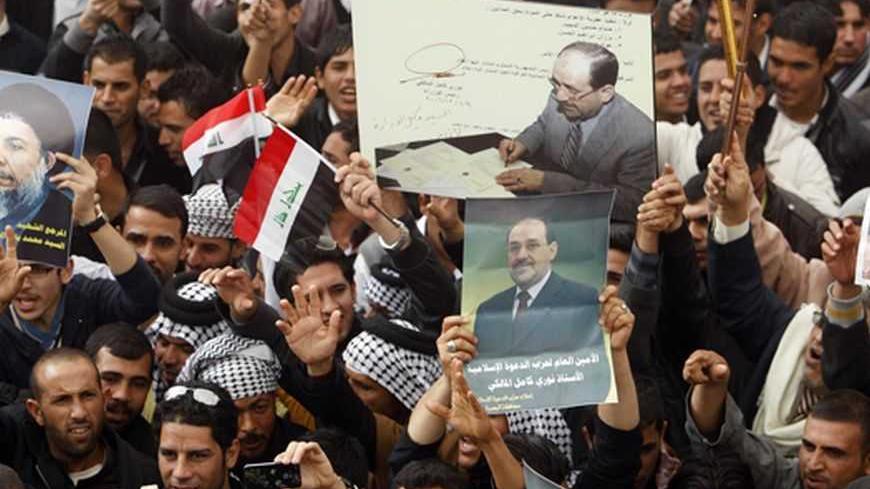 Both options were passionately discussed at political gatherings and media roundtables, yet it seems there is no way to reach a political consensus as the conflict between the parties enters its critical stages.

Despite the fact that Maliki still entertains the option of keeping the political situation the same as it is today until the elections at the beginning of 2014, there is a fair chance that violence could erupt, especially in light of escalating and widespread protests.

Maliki's rivals wish to prevent any elections, especially on the local level next March, from taking place under the current government. They accuse the government of not only abusing state powers to aid the State of Law Coalition, led by Maliki’s party, but also of doctoring nearly one million votes from military and police forces in favor of Maliki. Moreover, for the past three years Maliki has been tightening his grasp on the defense, interior and intelligence ministries, in addition to the National Security Advisory, by directly overseeing their activities and handpicking their leaders based on their loyalty to him.

Maliki meanwhile fears elections over which he does not have supervisory authority. He accuses his opponents of seeking to apply the quota system to the Electoral Commission of Iraq, which would allow them to maintain their current stake in the political map. He hopes that his popularity has spread to the extent that he is able to obtain a comfortable majority and to secure a third term.

The motives driving the demonstrations in Iraq differ from one group to another, but there can be no doubt that these disparate parties were temporarily united in opposition to Maliki’s announcement regarding his intention to run for a third term.

The relevance of the issue of Maliki’s third term to the current crisis may not be immediately apparent, but it is highly tangible in political corridors. A few days ago, two representatives of Sadr proposed to Maliki that he forgo his ambition for another term, and in exchange Sadr would lend him the support he needs to maintain his position as prime minister for the last year of his current term.

Prior to being re-elected in 2010, Maliki had announced that he did not intend to run for another term. However, he reneged on that pledge after he was elected at the end of that same year.

In Maliki’s estimation, early elections would provide a way out of this controversy. If elections are held, the debate surrounding the third-term issue will be resolved in his favor. However, he fears being out of power even for a few months, and that the interim authority would expose the many cases of corruption and irregularities plaguing his government to the electoral advantage of his opponents.

Iraqi political history does not suggest that those who leave power can easily reclaim it. The conflict today centers around one specific question: Who will head the supervisory authority overseeing future elections? Whoever occupies this position will most likely be victorious come election time.

This article was translated by James Spencer.