Is Lebanon a Veiled Theocracy?

Recent debate in Lebanon over the legalization of civil marriage has caused an uproar and raised questions about the true nature of the Lebanese Republic, writes Jean Aziz. 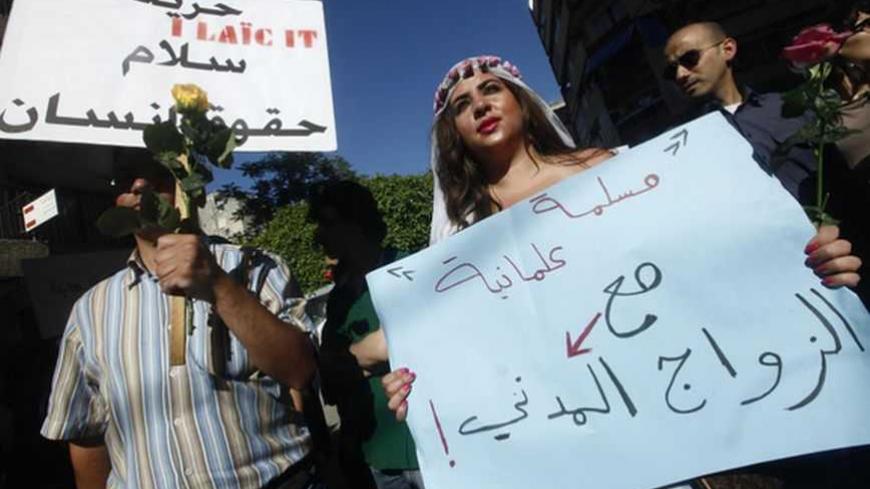 A Lebanese activist, dressed as a bride, carries a sign during the Lebanese Laique Pride, a secular march towards citizenship, in Beirut, May 6, 2012. The signs read, "A Muslim secular supporting the civil marriage" and "Freedom, peace, human rights." - REUTERS/Wadih Shlink

A Sunni Muslim religious official responsible for the Lebanese Sunni community caused an uproar in Lebanon this week, when he issued a religious edict threatening any Sunni official in government or parliament with apostasy if they approve a civil marriage law in Lebanon. The event raised questions of whether Lebanon is a veiled theocratic republic and of whether the state’s “civil” character is just a veneer.

After a meeting of Sunni clerics on Monday, Jan. 28, Sheikh Rashid Qabbani issued a fatwa, or religious edict, that said, “Any Lebanese official in government or parliament who approves the legalization of civil marriage is deemed to be an apostate (murtad) and outside of Islam. He may not be washed, shrouded, prayed upon or buried in Muslim cemeteries.”

This is a very serious development because Qabbani is currently Lebanon's official mufti — the top religious official for Lebanese Sunnis — and because, under Islamic law, a fatwa deeming a Muslim person an apostate is essentially a call for that person’s death. According to Islamic jurisprudence, “the sentence for apostasy is death.”

The story began on Jan. 19 when Lebanese media revealed that a Lebanese Muslim couple, Khouloud Succarieh and Nidal Darwish, had married in Beirut by signing a civil-marriage contract, without resorting to Beirut’s religious authorities — a move that was unprecedented in Lebanese history. Since the Lebanese state’s founding in 1920 and the writing of its constitution in 1926, the country has not had a uniform civil code governing marriage. The constitution provides for the protection of the Lebanese sects’ rights in personal status matters, thus leaving that area under the authority of the religious institutions.

Over the decades, the Lebanese government has recognized 18 sects, each of which has its own personal status code that is not subject to state institutions. When a Lebanese citizen is born, he or she is issued a certificate by their relevant religious authority, which regulates inheritance, adoption, divorce and other life matters. But that prevents inter-sect marriages unless someone switches sects. As some put it, under Lebanese law, a Christian man is not allowed to fall in love with a Muslim woman!

It is said that the Muslims between 1920 and 1936 introduced that condition for accepting the separation of Lebanon from the Arab and Islamic world. This explains why the top religious official responsible for any Lebanese Muslim sect holds the title of “mufti of the Republic.”

Over the decades, many have tried to change this. Some tried to adopt an optional law for personal status matters under which one could marry outside of the religious institutions’ authority. Technically, that already exists: Any Lebanese couple can have a civil marriage abroad, return to Lebanon and register their marriage locally. It is peculiar that the Lebanese state recognizes civil marriages conducted abroad but refuses to pass a law recognizing civil marriages conducted in Lebanon. That has produced the comical phenomenon of highway ads announcing discounts by tourism companies for trips to Cyprus for the purpose of a civil marriage.

The first attempt to pass a law for optional civil marriage was in 1969, when the deputy sponsoring the bill stood in parliament and said, “I just want one Sunni deputy to co-sign this bill with me.” None did. The Sunni prime minister told him, “That law runs contrary to the Quran.” The second attempt came in 1997, when the late President Elias Hrawi succeeded in passing a decree for optional personal status matters in the cabinet; two thirds of cabinet ministers voted for it, as stipulated in the constitution. But the prime minister at the time, Rafik Hariri, refused to sign the decree, which is required before it is sent to parliament for approval. Hariri left that decree unsigned — contrary to proper legal and constitutional procedures — until he was assassinated in 2005.

Two weeks ago, there was a third, more serious development. Two Lebanese citizens, Succarieh and Darwish, tried to conduct a nonsectarian marriage with the help of a lawyer who is a civil-society activist who favors the development of a secular state. The lawyer found a legal interpretation saying that the law made in 1936 — by the French mandate governing Lebanon — that gives the religious authorities a monopoly on personal-status matters also required that another law be made for those wishing to stay outside religious institutions’ authority. But such a law was never made. Therefore, the lawyer thought, he might resort to Lebanese civil and commercial contract law instead. He organized the couple’s marriage in accordance with that law, and then requested official ratification of the marriage — thus triggering the problem that has befuddled officials and caused religious clerics to revolt. During a cabinet meeting on Jan. 22, Prime Minister Najib Mikati angrily said that he refuses to discuss the matter and asserted that no law creating a civil-marriage option will be discussed as long as he is prime minister.

The controversy spread through social media and caused discontent among secular state activists. But some say that the issue was fabricated because Qabbani, whose fatwa sparked the uproar, faces an election in two weeks, and his term may or may not be renewed. What’s more, two years ago his son was linked to a corruption scandal that was connected to Qabbani himself. Some have speculated that the uproar he caused was merely a kind of sectarian one-upmanship designed to stir sectarian feelings and help himself get reelected.

But that does not address the other side of the issue: How can the Lebanese state be considered non-theocratic when the religious establishment can issue its own laws irrespective of the Lebanese constitution? Why can Lebanese citizens not have the option to be under the government’s authority when it comes to personal status matters — without having a fatwa calling for their death issued against them? This is another example of the disturbing religious extremism and fundamentalism around Lebanon. The extremism is being challenged by brave people like Succarieh and Darwish, who deserved to be congratulated for their action.