The positions of some new legislators in favor of civil unions to be performed in the Mediterranean country have outraged religious authorities. 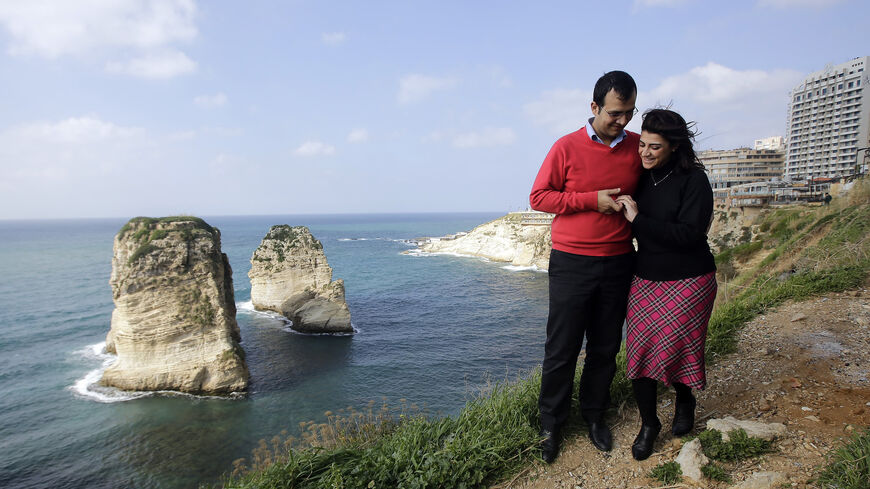 Kholoud Sukkarieh (R) and Nidal Darwish, who got married in defiance of the ban on civil unions, walk past Pigeon Rock, Beirut, Lebanon, Jan. 25, 2013. - Joseph Eid/AFP via Getty Images

BEIRUT — Nay El Rahi has been fighting for women’s rights in Lebanon for years. One of the historic demands of the Lebanese feminist movement is the legalization of civil marriage in the country. As a researcher, Rahi has also studied this topic throughout her career. So when it was time for her and her partner to tie the knot, they knew the only way to do it was through a civil union. But since civil marriages are not allowed in Lebanon, they had to fly to Cyprus.

“I wouldn’t have gone to Cyprus if I had been able to do that here, because we are from different religions and we are both seculars,” Rahi told Al-Monitor. Marriages in Lebanon are traditionally performed through a religious authority, depending on the religious sect. For interfaith marriages, one of the partners has to convert to the faith of the other spouse. In a country where “religion is politicized,” according to Rahi, civil marriage is a very controversial topic.

That's why when three newly elected members of parliament coming from the protest movement raised their hands in favor of it, religious authorities were outraged. Right after the May 15 elections, Sunnis Halime Kaakour, Ibrahim Mneimne and Waddah Sadek positioned themselves with civil marriage during a debate on Lebanese television. Just hours later, Sheikh Hassan Merheb, deputy inspector general of Dar al-Fatwa, the highest Sunni authority in the country, started attacking them. Merheb accused them of “not representing Sunnis” and called believers to “spit in their faces” if Kaakour, Mneimne and Sadek didn’t reconsider their positions.

“I got a lot of pressure and threats because of my support for civil marriage,” Kaakour told Al-Monitor. “They used mosques and religious men against me; they even tried to incite the people to be violent with me,” she added. The subject is a “taboo, a red line” in Lebanese politics. It has always been. Despite multiple attempts to pass a law that allows civil marriage ceremonies in Lebanon, with the first bill being introduced in the early 1950s, this landmark still seems very far away.

Kholoud Sukkarieh and her now husband, Nidal Darwish, were the first couple to be wed in a civil ceremony on Lebanese soil almost 10 years ago. They owe it to the combination of a French law that allowed nonreligious colonizers to marry Lebanese women through a civil union during colonial times and the right, acquired in 2009, for people to cross out their sects from their registry. “Both my husband and I thought that civil marriage was a better way to have a relationship in life,” Sukkarieh told Al-Monitor from Sweden where she is exiled.

“We chose a civil marriage for different reasons. It is considered a cornerstone to fight the sectarian regime; we wanted to denounce the corruption of religious courts, whether Muslim or Christian and to defend women’s rights,” she said.

The number of threats and attacks toward them and their newborn baby forced them to flee Lebanon in 2016 and seek refuge in Sweden. But the seed they had planted started to grow. “In the first year of our civil marriage, there were 15 couples who got married, were registered and recognized by Interior Minister Marwan Charbel — like us,” she said.

But when his successor Nouhad Machnouk took office, he declared that he would not be signing contracts for civil marriages performed in Lebanon. In 2019, the debate came back to Lebanon. Raya el-Hassan was the first woman appointed to head an Interior Ministry in the Arab world and she confessed to be ready to open a dialogue about this controversial topic. Just a month later, Mufti Abdellatif Deriane told her that this union “is against the Islamic religion” and “puts family cohesion at risk.”

“Unfortunately the possibilities of having a civil marriage have gotten worse, because in Lebanon religious men control political people and this is a horrible problem,” Sukkarieh noted.

Rahi agreed, adding, “Politicians use religions to grow their political following and to keep the grip around the communities with a very tight lock. The religious authorities — both Muslim and Christian — have a consensus that they are against civil marriage because they would lose a lot of money when people don’t go to them to get married and they would lose their control over the community.”

This tireless fight for civil marriage to be approved in Lebanon allowed the legalization of civil unions abroad in 1998, thanks to the proposal by late President Elias Hrawi. Those who can afford it travel 264 kilometers (164 miles) to Cyprus, where 3,000 couples from the region, specially Israelis and Lebanese, tie the knot in civil ceremonies. But in a country where around 80% of the population lives in multidimensional poverty, according to the United Nations, most couples give up and go through the religious authorities.

Secular and feminist movements have highlighted the importance of civil marriage as the door to a civil personal status law. In Lebanon, all matters regarding marriage, divorce, inheritance among others are handled by the 15 personal status affairs courts that answer to all the religious sects recognized in the constitution. “Politicians are always opposing the radical transformations and reforms such as the civil personal status law, but the change movement is out there trying to separate state and religion,” Rahi said.

Many Lebanese have hope in these 13 newly elected members of parliament as the ones in charge of planting the seeds for radical change in the future. Despite the long road ahead, bringing back the debate about civil marriage is a good place to start. “It threatens to destabilize the status quo because this means that the politics and religion duo loses a lot of their power and that the grip of religious sects is broken,” Rahi concluded.