On April 25, 2013, the first civil marriage was officially registered in Lebanon, a move that could forebode a radical change in the longstanding political sectarian system, writes Jean Aziz. 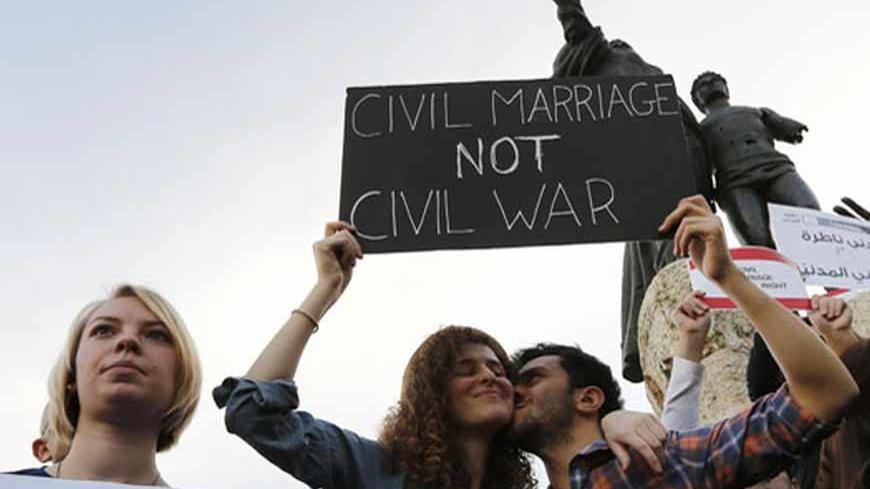 A man kisses a woman as they hold up a placard during a protest demanding to legalize civil marriage in Lebanon, at Martyrs' Square in downtown Beirut, Feb. 4, 2013. - REUTERS/Jamal Saidi

Months after the contract was signed [Oct. 10, 2012], the Lebanese Interior Ministry agreed on April 25, 2013, to register the first civil marriage contract "made in Lebanon." The issue does not end here for some religious officials, particularly those from the Sunni community. It also does not end here for activists defending human rights and civil society in Lebanon. It is a step that will be recorded in the history of Lebanon's political, legal and constitutional system, as will the names of those involved: Kholoud Sukkarieh and Nidal Darwish.

For the first time since 1936, when the French Mandate governing Lebanon instituted sectarian personal status laws in Lebanon, two Lebanese citizens were able to conduct a civil marriage on Lebanese territory — without being forced to resort to a religious authority, among the 18 authorities spread over the 18 legally recognized religious sects.

It was not a coincidence that Kholoud and Nidal signed their marriage contract — in the presence of a notary public — on Oct. 10. They wanted the date to correspond to the anniversary of the signing of the Universal Declaration of Human Rights in 1948.

Just over four months ago, the two — along with many other civil society activists and defenders of human rights in Lebanon — embarked on a fierce battle to confront the "religious authorities." This confrontation reached its peak on Jan. 28, 2013, when Sunni religious figures held a meeting at their official headquarters, Dar al-Ifta, headed by Sunni Mufti Mohammed Qabbani. Following the meeting, they issued a fatwa saying: "Every Muslim official, whether a deputy or a minister, who supports the legalization of civil marriage, even if it is optional, is an apostate and outside the Islamic religion. [Such officials] would not be washed, would not be wrapped in a [burial] shroud, would not have prayers for their soul in line with Islamic rules, and would not be buried in a Muslim cemetery." The fatwa's ruling that some Muslims are "apostates" has dangerous practical implications in some Islamic societies. For "spilling the blood of an apostate" — or a ruling to kill him — is permissible according to sharia or Islamic law, which punishes those who leave Islam with death. Nonetheless, Kholoud and her "husband" Nidal, continued their struggle, accompanied by an active and persistent civil society.

The first victory in their battle for human and civil rights occurred on April 3, the day the top advisory body of the Lebanese Ministry of Justice issued a memo saying that there is nothing in the Lebanese law that prevents the registration of Kholoud and Nidal's marriage. This came after the Interior Ministry — which is charged with legally recording marriages — said that there is no civil personal status law in Lebanon. Thus, the registration of the aforementioned marriage poses a legal problem in terms of what party, or law, will determine the affairs of Kholoud and Nidal's family in terms of inheritance, adoption, divorce and other issues normally determined by the personal status law. However, the highest legal body in the Ministry of Justice responded by saying that it is well-known in Lebanon that any marriage held by Lebanese citizens in any country in the world is formally registered by the Lebanese authorities. The protocol has been for Lebanon's civilian courts to deal with these marriages and [when issues arise] apply the civil law from the country in which the marriage was concluded.

Thus, for decades, Lebanese citizens have been getting married in Cyprus, France or any other location, and then registering these marriages with the Lebanese authorities. If any conflict arises, those involved go to the Lebanese courts, which review the dispute based on French law, Cypriot law or the personal status law of the country in which the marriage took place. Accordingly, the top advisory body of the Ministry of Justice said that Kholoud and Nidal could sign their marriage before a notary public in Lebanon, and then choose the personal status law of any country in the world that they want applied to their marriage. Following this decision, the Lebanese Ministry of Interior could not find any legal obstacle that would prevent them from registering the marriage.

Nevertheless, the Interior Ministry continued to stall the matter for fear of the "religious," especially in light of the position of former Prime Minister Najib Mikati. Mikati, a conservative Sunni, confirmed in a formal meeting of the Council of Ministers on Jan. 22 that he would not even allow talk about civil marriage — even if it was optional — as long as he was prime minister. Perhaps then it was not a coincidence that Lebanese Interior Minister Marwan Charbel dared to register Kholoud and Nidal's marriage just one month and three days after Mikati's resignation on March 22.

The issue, however, does not end there. Following the registration of the marriage, religious conservatives, particularly the Sunnis among them, issued a series of escalating positions. On the other hand, it must be noted that a new path opened in front of the Lebanese people, not only in their personal lives, but with regards to the political system. When the Lebanese constitution was ratified in 1926, it stipulated a so-called "political sectarian" system. This system was reinforced by recent constitutional amendments in 1990, which stipulated in Article 24 of the constitution that equal shares in the Lebanese parliament would be distributed among Christians and Muslims, and likewise for the cabinet (Article 95). We must note that the same constitution stipulates that this sectarian distribution is temporary, yet this temporary provision has continued for nearly 90 years, and is becoming more entrenched legally and in practice.

Yet, with Kholoud and Nidal's step a new reality has begun. For example, what if the scope of this move is widened? What if, after only a few years, Lebanon finds itself with thousands of citizens who have conducted civil marriages outside sectarian confines? At that point, the moment will come where these people raise their voices, saying that they are deprived of their political rights as citizens. This is because constitutional articles 24 and 95 do not give them rights to representation in parliament or in the government. This will prompt a large segment of the Lebanese population to demand a serious adjustment to the political sectarian system, and open a "political civilian" loophole for the first time, just as Kholoud and Nidal's wedding opened a personal civilian loophole.

Perhaps the interior minister was trying to mitigate the impact of their marriage, when he agreed to register the marriage on the condition that neither of them change their official sect. This condition may seem like a formality, but it is contrary to the concept of freedom of conscience as enshrined in the Universal Declaration of Human Rights in Article 18 thereof — the very declaration that Kholoud and Nidal chose to have their marriage date coincide with. Reforming the political system in Lebanon could turn into a long legal battle, but it is clear and certain that the first step of this battle has begun with Kholoud and Nidal's marriage on Oct. 10, 2012, and its subsequent registration on April 25, 2013.