Omar al-Shaher writes that five million state employees receive inflated salaries and do little or no work, costing the state $83 billion and creating a drag on the Iraqi economy. 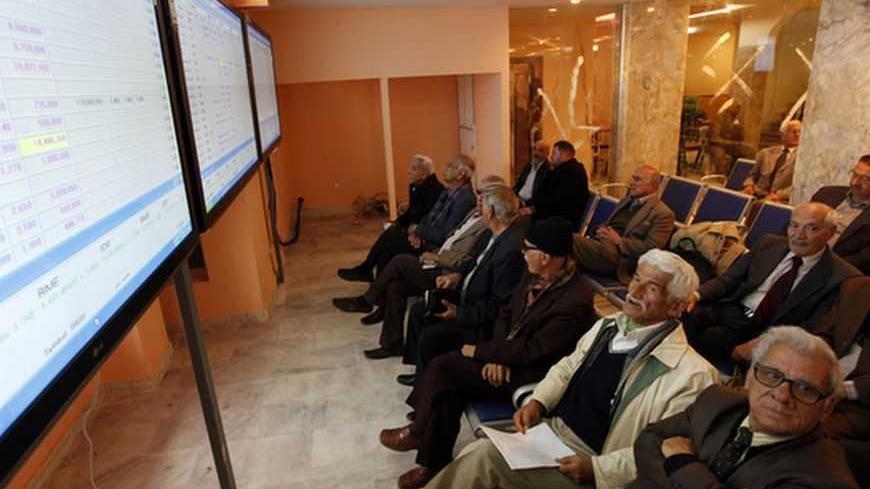 Investors monitor stock information on an electronic board at the Iraq Stock Exchange in Baghdad, Jan. 7, 2013. - REUTERS/Mohammed Ameen

The attempts of high-ranking officials, however, to keep the salaries of employees in their departments the same gets in the way of yielding fruitful results.

The issue of salaries is controversial. When activities in the private sector hit rock bottom in 2003, as a result of the shortfall on the level of security and infrastructure, the government hired millions of individuals from different backgrounds. The recruitment provided the citizens with a fixed income and served as a shield preventing their engagement in violence.

Until this point, no official statistical study has been conducted on the number of state employees. Nevertheless, it is estimated — according to informed sources within the Ministry of Economy and Planning — that the number of permanent employees in the Iraqi government amounts to five million, half of whom are military personnel or members of the police force.

Economic analysts believe that an increase in the number of employees in any sector must correspond with resulting achievements. Yet the offices of the Iraqi government, regardless of the surplus of employees, are still providing many vital services, such as electricity and water, at sub-par levels.

Iraq has been struggling for years with the lack of electricity and water installations in addition to the municipal services. Many current governmental agencies are still blaming the regime of Saddam Hussein, ten years after its overthrow, for engaging the country in a series of wars and conflicts that led to the deterioration of infrastructures.

Economic analyst Jawad al-Shamri believes that the massive number of state employees should reflect progress in services, yet facts suggest that the contrary is true.

“Millions of state employees do absolutely nothing,” noted Shamri, who provides consulting to many media outlets in Baghdad. “The recruitment policy does not live up to the realistic needs of the productive apparatus; it responds to the religious and political backgrounds of those in charge,” he added.

Shamri deduces that this policy has brought about the rampant disguised unemployment within government institutions.

“The salaries of employees have had the lion’s share in the budget during the past years,” said MP Nahida Daini from the Iraqi List coalition.

“The Iraqi government budget for 2013, which amounts to $138 billion, allotted $83 billion to the salaries of employees,” said Daini, the Sunni MP for the opposition coalition led by Iyad Allawi. “The recruitment policy has led to an inflation in the number of employees in government institutions,” she added.

In the same context, Daini expressed that “quotas have given rise to a disordered recruitment structure. Many officials, as soon as they assume a position, go in the direction of hiring their relatives or those who share the same religious or political background, regardless of the realistic needs of the department.”

According to sources within the legal committee that is exerting efforts to standardize salaries, the main aim of this law is to “halt the transfer of employees from one institution to another.”

In fact, employees of the prime ministry, the presidency and the parliament have the highest salaries, which amount to $1,300 for university-degree holders, according to the payrolls of these institutions. However, the salaries of employees with similar degrees in the ministries of industry and the environment are half this amount.

In parallel, the ministries of education, oil and electricity are considered to be jackpots, given the elevated salaries within these institutions.

Employees who hold university degrees in the ministries of foreign affairs, oil and education receive allowances amounting to 200% of their nominal salaries. The allowances differ for each ministry and include risk compensation, living expenses and many other things.

The legal committee in charge of standardizing salaries states that many employees apply to move to the high-salary institutions, which in many cases causes a vacuum of competences within some government agencies.

In order for the committee to be able to standardize salaries, those in charge must review their recruitment policies so as to ensure citizens can enjoy more than two hours of electricity per day.