The United States seeks to combat perceptions from some Iraqi activists that its training and employment programs have been ineffective, writes Omar al-Shaher. 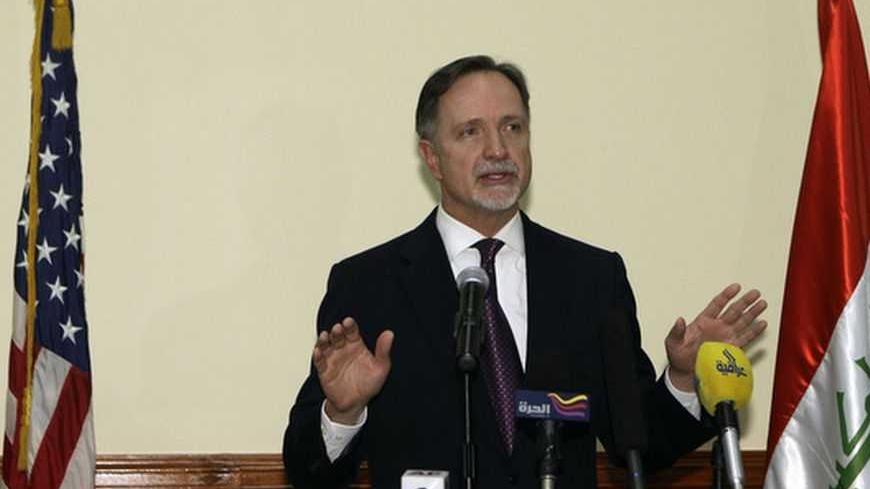 US Ambassador to Iraq Robert Stephen Beecroft speaks during a news conference in Baghdad, after the announcement of Barack Obama's victory in the US presidential election, Nov. 7, 2012. - REUTERS/Khalid Mohammed

Civil activists in the Sunni-dominated Anbar province believe that the US-funded livelihood-skills training programs were either overly selective or riddled with corruption.

In this regard, the US Embassy in Baghdad announced that on on Feb. 16 it hosted the “Victories from Iraq” bazaar, featuring the works of Iraqi artists who have benefited from US-funded programs addressing unemployment and developing small businesses.

Mohamed al-Alwani, the head of a youth organization in the city of Ramadi, noted, “Although the Americans have invested millions of dollars between 2005 and 2009 in employment projects in Anbar, the Iraqi intermediaries misused these amounts.”

According to the US Embassy in Baghdad, “Since 2007, the US State Department has provided over $53 million to the International Organization for Migration (IOM) to implement livelihood projects for 145,000 Iraqis.”

The embassy added, “One of the IOM’s most recent projects, the Community Revitalization Program, partners with grassroots NGOs to extend vocational and business-skills training to vulnerable communities in over 13 governorates in Iraq.”

According to the embassy, “Training ranges from weaving to organic farming to dental lab work. Beneficiaries are then offered business courses on how to market their new skills and manage their finances.”

Baha al-Azawi, the chairman of an organization dedicated to developing the skills of youth in Anbar, said that “while large amounts of money are flooding into Ramadi in the form of loans targeting unemployed youth, Iraqis are managing the money, which undermines its influence.

“Youth that are desperately in need of this money are not receiving any. Relatives and friends of the intermediaries are taking the lion’s share. There is a growing trade in Ramadi using the US money, and the Americans probably have no clue about it,” he added.

“This money was meant to provide the unemployed youth of Anbar with jobs to keep them away from violent groups, which offer tempting incentives to encourage people to join. Those who benefited from the money cannot be described as unemployed, because they either own independent businesses or have jobs. Meanwhile, hundreds of thousands of youths have taken to violence to secure livelihoods,” Azawi declared.

In the same context, Anbar is the main stronghold of al-Qaeda, which is accused of being behind the violent acts that have killed hundreds of thousands of Iraqis following the US invasion in 2003.