The Iraqi Sunni politician Ahmed al-Alwani claims that Iraqi private banks have been involved in schemes to bypass the sanctions imposed on Syria and Iran, reports Omar al-Shaher. 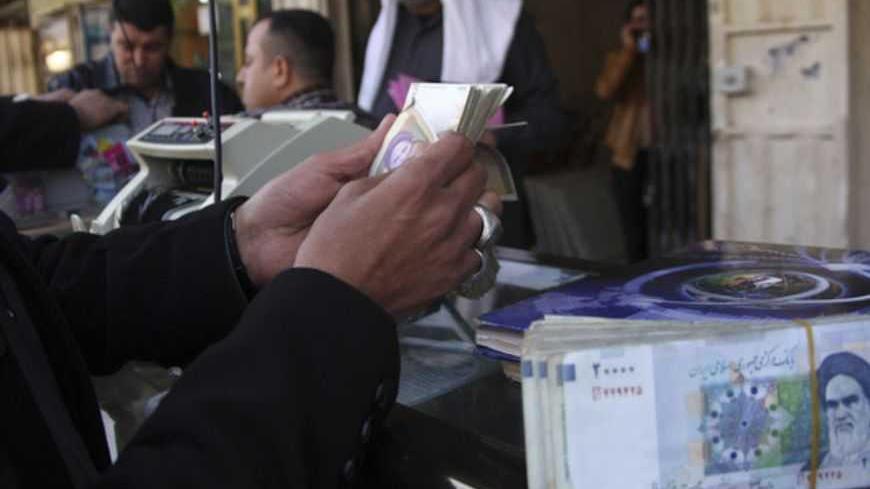 The controversial Iraqi Sunni politician Ahmed al-Alwani, who is president of the Economic Commission in the Iraqi parliament, ridiculed the notion that if Anbar province gains autonomy, its economy will be weak because the province lacks essential economic resources. He said that large Iraqi provinces can attract a lot of investment.

Alwani proudly claims to be “the godfather of the Anbar [autonomy] project.” He said that “whoever says that Anbar wishes to become an [autonomous] province in order for it to throw itself into the arms of neighboring Sunni Arab states is getting his information from [the wrong sources].”

Alwani is considered to be at the forefront of the Anbar protest movement that started more than two months ago and spread throughout Sunni-dominated areas in Iraq to oppose Prime Minister Nouri al-Maliki’s policies. The protests turned into an open-ended sit-in on the international highway that passes through Anbar and connects Iraq to both Syria and Jordan.

Alwani gained fame when he was reported to have accused Iraqi Shiites of being subservient to Iran and working to serve its interests in Iraq, but he has denied saying that.

Anbar is majority Sunni and the largest of Iraq’s provinces, covering a third of the country. It borders Syria, Jordan and Saudi Arabia and has one of the largest untapped gas fields in Iraq, the Okaz field.

Alwani said that “establishing a province does not mean secession. According to the constitution, [Anbar] should receive a portion of the state budget to manage its affairs, as happens with the Kurdistan region.” He added that “the Iraqi constitution provides for the formation of [autonomous] regions, but it also provides for the existence of federal ministries, such as finance, defense and foreign affairs. This is to ensure the success of the [autonomous] regions project.”

Along with a number of Sunni lawmakers, Alwani formed a team headed by Speaker of Parliament Osama al-Nujaifi. Alwani said that he is trying to prevent attempts by Maliki’s government to dominate the Iraqi Central Bank, which is an independent body tasked with managing the country’s monetary policy.

The dispute between that group and the government reached its most intense period when in October 2012 a warrant was issued against former Central Bank chief Sinan Shabibi, charging him with corruption. In October 2012, the Iraqi cabinet appointed the head of the Board of Supreme Audit (BSA) Abdul Basit Turki to be the acting Central Bank governor.

The BSA is the highest fiscal regulatory authority in Iraq and an independent body that the constitution says should be controlled by the parliament.

Alwani said that “the parliament decided to scrutinize the work of the Central Bank after suspicions were raised about the [bank’s operations] under Shabibi’s leadership, specifically when economic sanctions were tightened on Syria and Iran. At the time, a number of private Iraqi banks started buying hard currency from Central Bank auctions and smuggled the money into those two countries. So we formed a committee consisting of the chairman of the parliament finance committee, Haider al-Abadi, the BSA head Abdul Basit Turki and me. That was done in coordination with the parliament deputy speaker, Qusay al-Suhail.”

“We prepared a detailed report free of sectarian, political or personal interests and sent it to the Independent Public Integrity Commission,” he said.

Alwani said that “Shabibi was not involved in the violations detected by our committee, but there was negligence in pursuing fraudulent documents that were used to withdraw millions of dollars from bank auctions via private banks. Some banks were buying from bank auctions amounts that exceeded their capital, which is a clear violation that the Public Integrity Commission should investigate.”

Alwani believes that “some political parties are giving cover to some private banks in Iraq to withdraw foreign currency from the Central Bank with false documents. I will not deny this charge, even for figures who are with me in the Iraqiya List, but I do not have the documentation to prove it.”

Alwani said that “some political figures are definitely implicated with a number of private banks in the auction. The proof is that these figures have valuable accounts and real-estate properties outside Iraq. We received information from a number of countries indicating the existence of real-estate properties and bank accounts for a number of Iraqi officials and politicians, but I do not have documents to condemn a particular person, whether it be the Iraqi prime minister or anyone else. But when I identify those persons, I will not hesitate to announce it.”

Alwani said that “some lawmakers are not experts in following up on economic matters. They said that the Central Bank has lost millions of dollars since Abdul Basit Turki succeeded Shabibi. We believe that Turki is an honest professional, as attested by his friends and foes alike, and those who say otherwise are trying to make gains by pressuring the Central Bank.”