As political and sectarian crises escalate in Iraq, the country’s parliament is struggling to reach an agreement over this year’s budget, writes Omar al-Shaher. 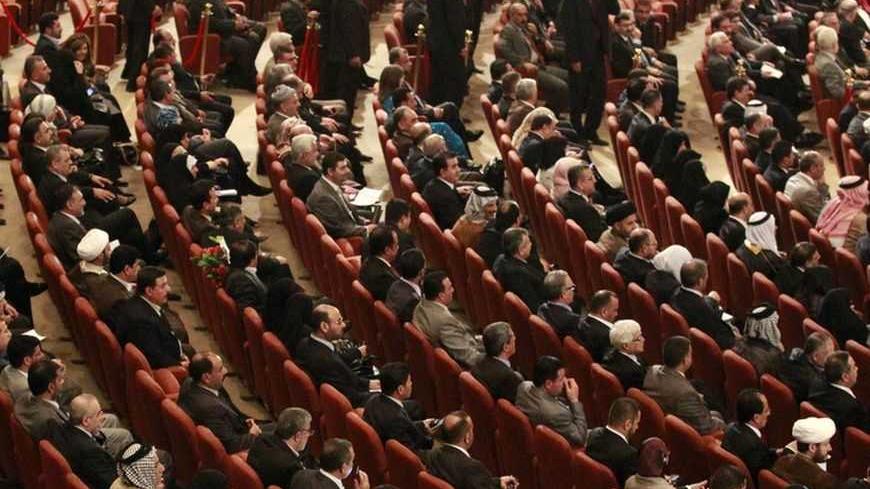 Members of the Iraqi Parliament attend a session at the Parliament headquarters in Baghdad, Nov. 11, 2010. - REUTERS/Thaier al-Sudani

The Iraqi budget for 2013 is a remarkable example of the negative impact of political conflicts on the economic interests of this country.

Despite the fact that we are now more than two weeks into the new year, Iraqi politicians and officials have yet to agree on a government plan for this year's spending. This is not a new occurrence in this country, which depends on oil exports to finance more than 95% of its yearly budget.

Iraqi Prime Minister Nouri al-Maliki is facing considerable opposition from both Sunni Arabs and Kurds, with whom he is locked in a bitter struggle over power-sharing, as he attempts to pass the draft budget for 2013. This opposition actually succeeded in blocking Maliki's political plan that included a $37 billion deficit in the 2013 budget set aside for the implementation of projects related to infrastructure, to be based on the method of deferred payment.

Maliki has expressed his anger on several occasions over the blocking of his proposed budget. Last month he told Iraqis that, because of political disputes, this budget would not include new projects to improve their situation.

Maliki's opponents, however, hold his bloc in parliament responsible for the persisting delay in approving the draft budget.

The Kurdish vice-chairman of the parliamentary finance committee, Ahmed Hassan Faizullah, said that "Chairman of the Finance Committee Haider al-Abadi, who belongs to the Maliki-led State of Law Coalition, is likely the one responsible for the stall in ratifying the budget thus far." He added, "Abadi is the only one raising this issue in parliamentary discussions regarding the budget."

Faizullah said, "One of the reasons for the delay in ratifying the budget is that when the government presented it to parliament, it included a decrease of nearly 105 billion Iraqi dinars [$90 milllion] in the share allocated to the Kurdistan region." He then added, "We addressed Abadi regarding this matter, but he then sent a list of budget deficiencies to the government without any reference to our concerns." He said, "It took us an entire month to convey this information to the government through official channels."

Faizullah noted that "Abadi belongs to Maliki's bloc. It is a large bloc and has allies in parliament, so it can speed up or slow down a lot of things."

Faizullah said that his committee, which is charged with reviewing the budget and then presenting it for discussion and a vote in parliament, has not accomplished many tasks in the past few weeks due to the ongoing political crises plaguing the country.

When asked about the impact of the conflict between the Iraqi PM and Minister of Finance Rafi al-Issawi over the ratification of the budget, Faizullah said, "I do not think that Issawi has a role in the problems plaguing the budget." He added, "Abadi may be the one stirring things up."

It was not possible to obtain a comment from Abadi on Faizullah's remarks.

Faizullah said that Maliki had tried to include a $37 billion deficit in the budget, based on a system of deferred payment, to fund projects related to infrastructure. He said, "Parliament thwarted Maliki's plan, because the financial benefits of this plan may outweigh the cost of implementation." He then added, "Had parliament approved Maliki's proposal, the budget would have been weighed down by a deficit that could drag on for years, something that Iraq may not be able to cover."

Among the issues raised by Maliki's opponents concerning the budget is the issue of final accounts of previous budgets.

A number of MPs are demanding that the government provides final accounts relating to the size of expenditure in previous budgets. They consider these accounts a necessary part of discussions concerning the ratification of the current budget.

The Iraqi parliament referred the budget back to the government at the end of last year, as a result of it not including these final accounts.

But a source in the Office of Financial Supervision in Iraq, a body concerned with reviewing these accounts independently of the government, confirmed that the Ministry of Finance, not Maliki, was responsible for providing final accounts.

This same source, who preferred to remain anonymous due to the sensitive nature of the information he was providing, said that "the Iraqi Ministry of Finance submitted the final accounts to the Office of Financial Supervision in 2011 twice, yet both times there were major deficiencies in these accounts that required them to be referred back to the ministry."

He said, "A final version of these accounts has been received by the office. It is now under scrutiny, and a decision in this regard could be issued soon."

The source noted, "These accounts are consolidated, so the delay is normal, but it seems that some people consider this to be negligence on the part of the government and seek to exploit this politically."

Omar al-Shaher is a contributor to Al-Monitor’s Iraq Pulse. His writing has appeared in a wide range of publications including France’s Le Monde, the Iraqi Alesbuyia magazine, Egypt’s Al-Ahaly and the Elaph website. He previously worked for Al-Mada covering political and security affairs and as a correspondent for the Kuwaiti Awan newspaper in Baghdad in 2008-2010.

by Murielle KASPRZAK and Joseph SCHMID | AFP | May 26, 2022
END_OF_DOCUMENT_TOKEN_TO_BE_REPLACED