The Iraqi Central Bank has adopted a policy of buying gold for its central reserve at a time when gold prices are at an all-time high, writes Omar al-Shaher. 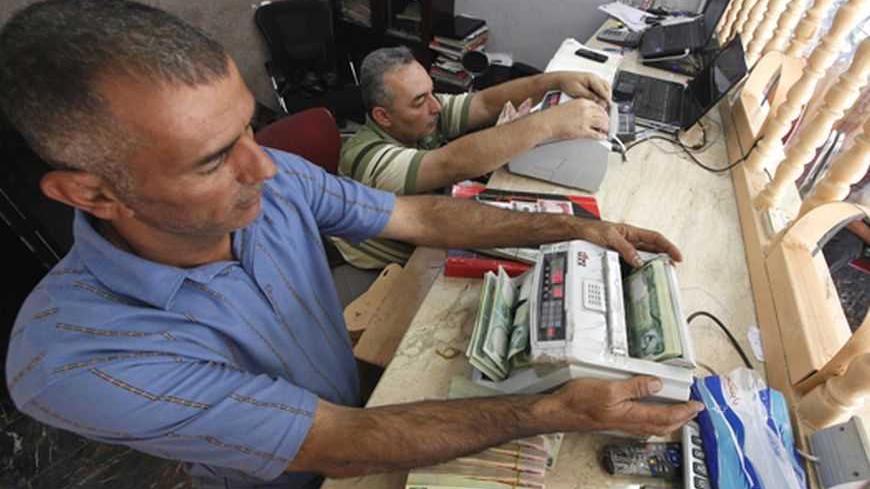 Despite the attention given by Iraqi media to the increase of gold reserves, locals are still oblivious to the repercussions of such an act on their daily affairs.

The monthly statistical report of the International Monetary Fund stated that over the three months between August and October of last year, Iraq’s gold holdings quadrupled to 31 tons, the first time something like this has happened in years. The value of gold as a strategic reserve has grown over the past few years due to the continued instability of the U.S. dollar exchange rate.

International banks perceive gold as having long-lasting value that is not affected by rapid economic development. Gold can be used to compensate for insufficient cash reserves in the wake of political or economic crisis. In that context, Iraq is probably the country that is most in need of a great deal of gold reserves given its succession of political and economic crises.

“Gold is the first shelter for countries in times of crisis,” said the Iraqi economic analyst Majid al-Suwari.

According to Parliamentary Economic and Investment Committee member Abdul Abass Shiyah, “it is normal for the public not to read between the lines of sharp increases in gold reserves.”

“The Iraqi dinar exchange rate is based on the amount of cash reserves, which include not only money but gold as well,” said Shiyah, a member of the Dawlat al-Kanoun parliamentary bloc led by Prime Minister Nouri al-Maliki.

Gold is the most stable component of official reserves. It will result "in the stability and possibly the improvement of dinar exchange rates," he added.

Shiyah reiterated that the public will sense indirectly the impact of the increase in gold reserves.

The Central Bank of Iraq announced in August of last year that cash reserves had reached $67 billion, which is a first in the country that relies entirely on oil exports to finance its budget.

“The Iraqi reserve is figuratively described as ‘cash,’ but in fact it has multiple components. Iraq owns U.S. dollars, euros, pounds, gold and different types of securities,” said Shiyah.

Since 2003, Iraq has had an insignificant cash reserve. Some sources state that those who were in charge of the Iraqi economy during the first months following Saddam Hussein's toppling converted a ton of gold, which was the only reserve held by the central bank, into cash.

“The central bank policy is currently based on the diversification of reserves. However, if the policy of purchasing gold had been adopted two years ago when the value of one ounce was about $500 to $600, Iraq would have quadrupled its investment gains,” he added.

He concluded that “this initiative started late, but not too late.” Suwari expects the central bank to pursue the policy of increasing gold reserves amid the government's spending tendencies.

He clarified that the Iraqi government needs the dinar to cover its huge expenses. The central bank provides it with the necessary Iraqi dinars in exchange for U.S. dollars obtained through the oil trade. Afterwards, the central bank converts dollars to gold.

Omar al-Shaher is a contributor to Al-Monitor’s Iraq Pulse. His writing has appeared in a wide range of publications including France’s Le Monde, the Iraqi Alesbuyia magazine, Egypt’s Al-Ahaly and the Elaph website. He previously worked for Al-Mada covering political and security affairs and as a correspondent for the Kuwaiti Awan newspaper in Baghdad from 2008-2010.

This article was translated by Steffi Chakti.