Iraq is considering a new health-care initiative in the face of criticism that only half of the current budget is received by the Ministry of Health, writes Omar al-Shaher. 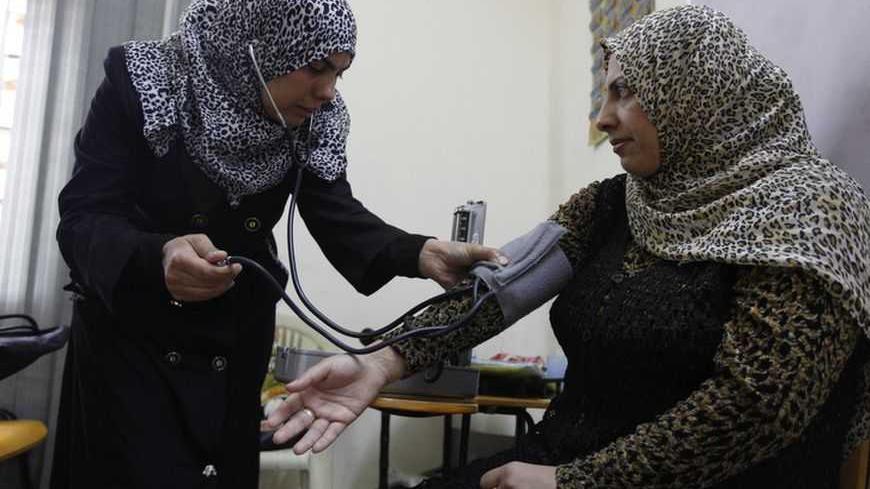 An Iraqi instructor teaches a widow how to use a blood-pressure device at widows training and development center in Baghdad, Nov. 12, 2012. - REUTERS/Saad Shalash

The Iraqi Ministry of Health is engaged in a study regarding the possibility of enacting a health care law, which is supposed to be the cornerstone of Iraq's plan to improve the level of health services provided by medical institutions and to provide a new source of funding.

Iraq allocates an estimated $5 billion annually to cover the needs of the health sector, whose infrastructure is limited.

The ministry said it formed three specialized committees that are working on putting in place the primary structure for a health care draft law in the country, before it is debated by the legislative institution.

Ministry spokesman Ziad Tariq said that the first committee is charged with studying the health systems of various countries, and looking at how Iraq's draft law could benefit from their experiences. The second committee is studying the Iraqi health system and identifying its major needs, while the third committee is dealing with financial matters related to the application of this law.

The chairperson of the Health Committee in the Iraqi Parliament, Liqaa al-Yassin, said that over the past few years the Ministry of Health has only been able to spend about half of its share in Iraq's budget. She asks: "What is the point in legislating a new law that is basically aimed at acquiring additional financial returns?"

In Iraq, the process for any new legislation begins with the ministry or the executive party that is drafting a law. It is then sent to the state's Shura Council, which is responsible for determining legal validity. It is then forwarded to the Council of Ministers to be discussed and ratified. Finally, it is referred to the Council of Representatives for approval or rejection.

Yassin, a specialist obstetrician, said, "We have yet to receive any draft law on insurance from the Ministry of Health, and according to our information, none of the steps in the legislation process have begun."

She adds, "What was sent to parliament in this regard is the draft of an old health care law, prepared during the previous electoral session. The Ministry of Health requested that our committee issue a statement of opinion regarding this draft, but did not request that we begin the legislative process for this parliamentary session."

The Iraqi constitution requires the legislation of a health care and social security law, but it does not specify how this legislation should be completed.

There is a conflict regarding legislative powers in Iraq between the parliament and the government. While the constitution stipulates that ratifying and writing proposals for draft laws is the exclusive right of the executive branch, it allows parliament to propose draft laws to the government, provided that the parliament does not interfere in the drafting process.

The Iraqi Ministry of Health has yet to provide any statements regarding its plan to draft a social security act. An employee from the ministry noted that the main ideas for this draft are not ready yet.

Yassin said that her parliamentary committee is in contact with the Ministry of Health regarding the subject of health care. She noted, "We held several joint workshops." She adds, however, "We do not know when we will receive the draft law that is being discussed by the Ministry of Health."

She said, "According to my information, the Ministry of Health now has an old draft of this law, and it needs a lot of adjustment and work in order to be ready for discussion in parliament."

The enactment of a health care law would involve converting these services to paid services, but at "reasonable prices," as noted by the Iraqi minister of health.

Yassin said that "first we must work on enacting a health insurance law, not a health care law." She added, "A health care law would force the poor to pay for services, and they are already in need of help."

She continued, "The Ministry of Health spends about 55% of its share of the general budget. Instead of looking for new financial resources, the ministry should focus on spending all of its allotted budget." She said that the state allocates about 5% of its budget to the health sector, a figure that should be significantly raised in light of Iraq's increasing oil exports.

Yassin said, "Iraq is now on the verge of finalizing a plan for national health policies in consultation and cooperation with the World Health Organization." She added, "The draft of this plan is on its way to our committee for discussion and approval, to be dealt with as a starting point for legislative frameworks related to the modernization of the Iraqi health system, and it includes programs for insurance and health care."

She said that the current infrastructure found in Iraqi public and private hospitals was unable to provide high-quality services to accommodate for the health care draft. She also talked about the need to encourage foreign and local investors to enter into the health sector and build private hospitals to meet growing needs.

Iraq is building ten hospitals in ten different provinces with a capacity of 400 beds each. According to the Ministry of Health, some of these hospitals will be completed by the end of this year.