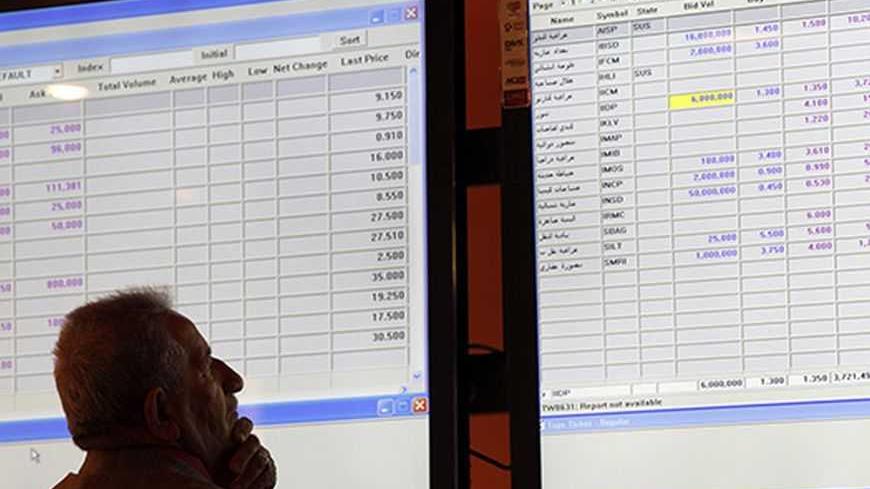 An investor monitors share prices on an electronic board at the Iraq Stock Exchange in Baghdad, Jan. 7, 2013.

One does not need an economics degree to become the minister of finance or to run the economic and investment portfolio in Iraq. A degree in medicine, electrical engineering or even veterinary science is enough to qualify for these positions.

Observers consider the credentials of government officials to be a major obstacle to building a qualified administration, one that can move beyond the transitional phase in which the country has stagnated for a decade.

The performance of Iraq’s administrative upper circles has been slack. As a result, the government has failed to meet the most basic needs of citizens who depend on government services.

Since 2003, Iraq has failed to establish a financial environment favorable to foreign investment, something it desperately needs to reconstruct its crumbling infrastructure. Iraq enacted a special law for just this purpose, but legislation alone was not enough.

The quota system, which requires the allocation of government positions based on sect and party, has even in the best of times seldom appointed economic and financial specialists to those offices in the government and parliament which most require such expertise.

Traditionally, Iraqi government posts are distributed based on the size of each bloc’s parliamentary representation. This could be viewed as commonplace if it were not for the tribal, ethnic and sectarian considerations given to the nominees. Blocs choose their nominees for these posts through internal negotiations, and usually it is the bloc’s leader and senior political figures who secure the top posts — regardless of their experience in the subject matter of the post they are assigned.

This phenomenon is not confined to Iraqi economic affairs. Since Adil Abdul Mahdi stepped down as the minister of finance during the 2005 interim government, three other individuals have been appointed to this office — and not one of them holds an economics degree. The current minister of finance, Rafi al-Issawi, holds a degree in medicine with a specialty in orthopedic surgery.

The same applies to the Parliamentary Finance Committee as well as the Parliamentary Economy and Investment Committee. Haider al-Abadi, who chaired the economy committee in the previous parliament and currently chairs the finance committee, is an electrical engineer by trade. Meanwhile, the economy committee's current chairman, Ahmed al-Alwani, holds a degree in veterinary medicine.

Issawi, Alwani and Abadi have had no prior work experience in any economic field. Their resumes suggest that none of them has ever held a managerial role in a private or public company involved in finance or economics, and none of them has ever written or published research in these fields.

An economist who goes by the name of Antoine says, “Those responsible for the country’s economic policy marginalize the well-qualified and keep them from participating in shaping policy. Expanding the country’s economy requires first that the quota system be done away with.”

The only bright spot in the Iraqi economic landscape is the oil sector. The service contracts between Iraq and numerous major oil companies have become a regional model for transparency and sound management of oil resources.

But the situation differs about 310 miles to the north in the city of Erbil, the capital of Iraqi Kurdistan, which enjoys near-complete autonomy from Baghdad.

In Erbil, Sulaymaniyah and Dohuk, one can see the scale of construction and development underway. This growth is possibly linked to the region’s tendency to rely on foreign expertise. It is no secret that many senior officials in the regional government seek to emulate the Dubai model.

“The difference in this region is that government officials do not try to act as economics experts, but instead they have hired experts to formulate successful economic policies," says economic analyst Ali Fukaiki.

He continued, “This allowed the regional government to create space for diversified investment. The government in Erbil limited its role in the market, and as a result investors were able to operate freely. The most prominent example of this was implementing a raised real estate tax, something which the government in Baghdad would not do. All of Iraq, except for Kurdistan, suffers from taxes and customs fees for imports and exports. Only Kurdistan was able to get rid of these encumbrances thanks to logical policy-making.”