Iran Balks at Nuclear Talks Without Sanctions, Rights on Agenda

A dispute over the agenda could be a factor in delaying a new round of nuclear negotiations between Iran and a US-led coalition. 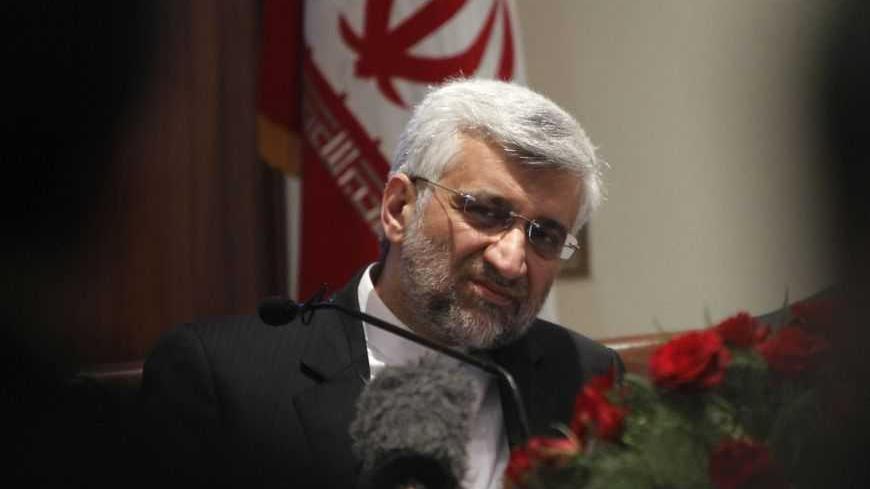 WASHINGTON — Iran wants the agenda for a new round of nuclear talks to refer explicitly to sanctions relief and what it views as its right to enrich uranium, Al-Monitor has learned.

An Iranian source who declined to be identified told Al-Monitor that a lack of agreement on these issues was slowing a resumption of talks, which had been expected this month.

The re-election of US President Barack Obama produced modest optimism that Iran and the United States and its partners in the P5+1 — the five permanent members of the UN Security Council plus Germany — would be in a position to show more flexibility to defuse a looming crisis over Iran’s advancing nuclear program. However, the same issues that stymied negotiators during three fruitless rounds last year appear to be preventing progress now and making it hard for the negotiators even to get back to the table. A Western diplomat told Al-Monitor's Laura Rozen Friday (Jan. 10) that efforts are under way to arrange a meeting at the end of the month, but that no date or venue had yet been agreed.

The Iranian source told Al-Monitor that Iran wants its rights under the Nuclear Non-Proliferation Treaty (NPT) to be stated in the agenda, “which means there will not be any restriction for enrichment …The second request is to decrease the sanctions from [the] UN not America and Europe.” If these two items are included, the source continued, Iran “will be in the position to discuss about a general agreement which includes any matters … interesting for IAEA [the International Atomic Energy Agency] and [the] 5+1 countries.”

While the NPT assures signatories of the right to the peaceful use of nuclear energy, the UN Security Council has demanded that Iran suspend uranium enrichment until such time as it satisfies the IAEA that it has not pursued the option of making nuclear weapons. US intelligence agencies have stated that Iran had a structured program to achieve a nuclear weapons capability from the late 1990s at least until 2003 and there are suspicions that Iran resumed some research afterward.

An Obama administration official, asked about the delay in scheduling a new round of negotiations, emailed Al-Monitor: “We are actively working to finalize a date and venue.  The P5+1 remains unified and is ready to re-initiate talks.  We hope that agreement with Iran can soon be reached on how to continue the talks and make concrete progress towards addressing international concerns about its nuclear program and finding a diplomatic solution.”

A European official, also responding on condition of anonymity, e-mailed Al-Monitor: “All I can say is that we await their response to our proposed dates/venue.”

It is possible that Iran is engaging in pre-negotiation negotiations in an effort to gain psychological advantage in the talks. Iranian officials may also be divided among themselves about the wisdom of resuming the process when it appears that the P5+1 is not going to sweeten significantly an offer Iran rejected last year. US officials have hinted that they might be more forthcoming in bilateral talks with Iran but Iran has not accepted that either.

Iran may also be awaiting the results of new talks with the IAEA this week (Jan. 16) on the alleged military dimensions of the Iranian nuclear program, although progress in that area seems entwined with the overall nuclear negotiations.

A third possibility is that Iran is waiting for President Obama’s new Cabinet to be confirmed in the hope that John Kerry, the nominee for secretary of state, and Chuck Hagel, the nominee for defense secretary, will be more conciliatory than the officials they are slated to replace. That seems unlikely, however, since Iran policy is set by the White House, not the State Department or Pentagon, and President Obama has been adamant about his determination to prevent Iran from developing nuclear weapons.

The longer the impasse continues, the more punishment is being inflicted on the Iranian economy by sanctions and the more pressure would appear to be mounting on Iran to make concessions. On the other hand, Iran is amassing ever larger quantities of uranium enriched to 20 percent U-235, perilously close to weapons grade.

US officials have warned that the window for progress is short. Iran holds presidential elections in June and internal politicking is expected to preoccupy the country’s elite starting after Persian New Year in March if not before.

Greg Thielmann, a senior fellow at the Arms Control Association in Washington, told Al-Monitor that the Iranians appear “to feel that they have to have something to show even to have an agreement to go back and talk.” Thielmann, a former senior State Department analyst on nuclear matters, added that it should be possible to “propose language that would not represent a concession in the real world” but would still give the Iranians “something to take back to their hardliners.”

The fact that negotiations over the agenda are so fraught is yet another “reminder of how difficult this whole process is,” Thielmann said.