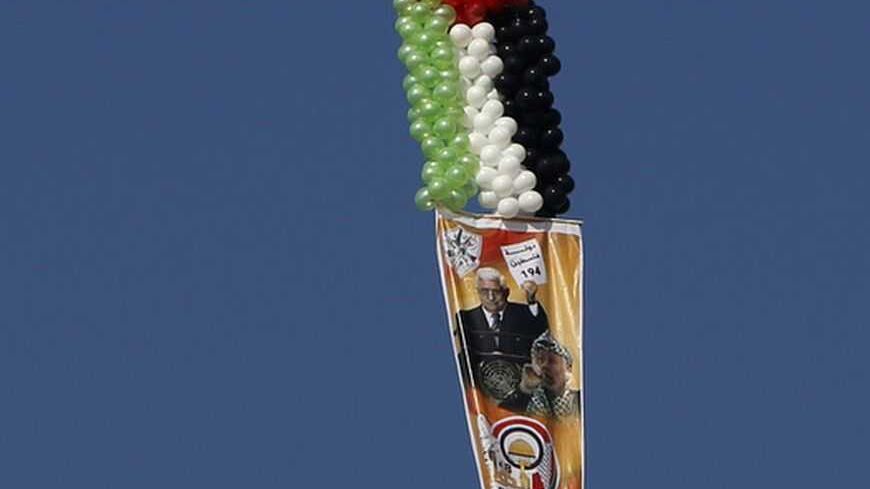 A balloon attached to a poster depicting Palestinian President Mahmoud Abbas and late Palestinian leader Yasser Arafat flies during a rally marking the 48th anniversary of the founding of the Fatah movement, in Gaza City January 4, 2013. - REUTERS/Suhaib Salem

Both Israel and the Palestinians claimed victory in the November war, despite the huge discrepancy in fatalities and destruction caused by it. The conflict resulted in the deaths of 153 Palestinians, 103 of them civilians, according to the United Nations preliminary investigation, while only six Israelis were killed. However, as Adam Shaltz points out, “victory in war is not measured solely in terms of body counts.”

The several factions in Gaza which, during the fighting, seemed to have formed a single and unified Palestinian (para)miliary alliance, say they not only “put up a good fight” against Israel’s huge military arsenal, but also “forced” Israeli into a cease-fire on conditions much more favorable to them.

Besides the easing of restrictions on movement, Israel, according to the conditions of the cease-fire, must also cease all targeted assassinations of Palestinians in the Gaza Strip. Factions in Gaza claim this is indicative of the failure of the Israeli army operation.

While Israel’s chief goal was to deter the Palestinian resistance by killing one of its main military figures, Israel was itself deterred by the Palestinian response, according to Abu Hassan, military spokesman for the Popular Resistance Committees (PRC) in Gaza, a coalition of armed factions made up mainly of ex-Fatah fighters opposed to negotiations.

“Israel’s claims about achieving victory in the last operation in Gaza are counterfactual. While [by the assassination of Ahmad al-Jaabari], they wanted to deter us and prove they cannot be deterred from killing our military leaders, it is obvious that resistance movements in Gaza have exacted a heavy price from the Israelis,” Abu Hassan stated.

Abu Hassan said the new ability of rockets to hit Israel’s main cities will force the Israelis to “think a hundred times before they kill a Palestinian military leader next time.”

Abu Ahmad, military spokesman of the Al-Quds Brigades in Gaza — the military wing of the Islamic Jihad — stated, however, that the latest confrontation was not “a military victory for either side.”

“The side which achieved more of its goals can be said to have been victorious,” he told Al-Monitor. Palestinian armed factions, he added, were dealt a significant blow by the assassination of Jaabari, who Abu Ahmad called “one of the most important military figures in Gaza.”

“This blow wasn’t deadly though,” Abu Ahmad explained. “It was one of the Israeli army’s goals, but, looking at the response from the Palestinian resistance and at what we have achieved, Israel has definitely lost much more than what it has achieved.”

“Although we lost some of our sites and resources, the Palestinian resistance was able to hit back at Israel harshly, instantly and deep into Israel’s main cities, shaking their security and forcing them into a cease-fire.”

Lessons from the 8-day conflict

Abu Ahmad explained that one of the primary military lessons learned was regarding the doctrine of “shock and awe,” and how best to employ it in future conflicts with the Israeli army.

“The most important thing we have learned,” said the Al-Quds Brigades spokesman, “was that the Israeli enemy needs to be shocked from the first day.”

“You have to send a powerful message on the first day in any future military confrontation with Israel, and this is what we have done. We are in a state of gradual escalation, and Israel will take into consideration our military capability to use this tactic in any future conflict.”

Mahmoud Saleh, a Gaza-based military expert, said that coordination between military factions in Gaza was the “most impressive” lesson learned and applied during “Operation Pillar of Defense.” However, this coordination, Saleh added, must be further developed as it was one of the most notable strengths of the Palestinian armed factions. The improved coordination also allegedly impressed the IDF, with particular regard to the swift implementation of the cease-fire by all Palestinian groups within a few hours of its announcement.

“One essential lesson which Palestinian factions should work on is how to further develop their coordination and work as one unified body. This has resulted in a high degree of efficacy and precision and considerably reduced the number of militant fatalities,” Saleh explained.

Elaborating on the coordination between several Palestinian military factions, the PRC’s Abu Hassan said fewer fighters were called up in the latest conflict which explains the “failure of the IDF to kill or target Palestinian resistance fighters.”

“There were mainly three units which operated during the last escalation: the rocket-launching unit, the anti-aircraft unit and the field-signal unit,” the PRC spokesman said, adding that “there were other units which we did not have to use, thus explaining why we believe we still have so much to shock the Israeli enemy with.”

In addition to this, Abu Ahmad of Islamic Jihad said that military factions in Gaza will look to enhance their anti-aircraft and anti-ship missile capability. This has already been in development since Cast Lead, and was briefly demonstrated in the latest confrontation, which, according to Abu Ahmad, “shocked the enemy” and was crucial to the speed of negotiating a cease-fire to the escalation.

“Israel depends mainly on air power,” he said. “This is something we have also learned, and we need to enhance our anti-aircraft defense. We expect we’ll be capable of targeting Israeli warplanes as well as ships in any future military confrontation.”

Mohammed Suliman is a journalist and human rights worker from Gaza. Mohammed has recently obtained a master’s degree in human rights from the London School of Economics. His writings appeared on different online publications, including Aljazeera English, Electronic Intifada and openDemocracy. He can be followed on Twitter at @imPalestine.