The governor of the Bank of Israel, Stanley Fischer, concerned over a possible fiscal cliff, urges the next government to do the right decision: raise taxes, despite the heavy political price, writes Idan Gribaum. 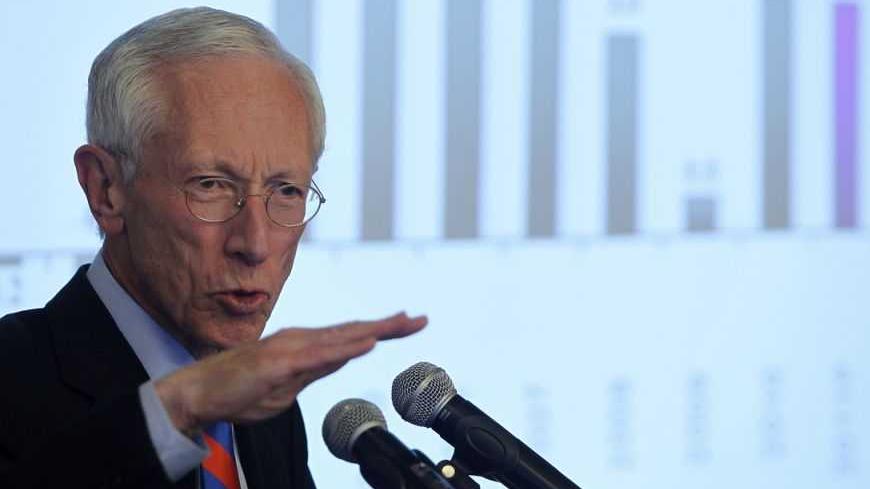 In the clamorous chorus reverberating around us, rising to ever more piercing tones as the date of parliamentary election [slated for Jan. 22] is drawing near, another voice – more judicious, more courteous and more concerned — may be heard above the clamor. It is the voice of Stanley Fischer, the governor of the Bank of Israel.

As known, Fischer is not running for a seat in the Knesset [the Israeli parliament] nor has he any intention of vying for the much coveted post of the finance minister. As a matter of fact, it isn’t at all sure whether he will stay in office the full term of his second tenure as Bank of Israel governor, which is to end sometime in 2015. What, then, induced Fischer to voice his opinion, clearly and sharply, on the issues on top of the agenda [of Israeli society] as he has recently done, on three different occasions?

It seems that Fischer, a veteran of many battles who has already seen a government or two established or toppled and replaced by another, just does not believe that the next Israeli government will be capable of taking the necessary economic steps — those that he deems indispensable. And it is any government that he is talking about – whichever it may be, regardless of its political makeup. Just like any one of us observing the local political arena, Fischer reads the polls and realizes that the next Israeli prime minister will most probably find himself in a weak position and will thus have to sign a series of coalition agreements that are liable to cost billions of shekels, which are nowhere to be found.

The fiscal cliff faced by Israel is discussed in another, previously posted article. Naturally, it is not nearly as steep as the fiscal cliff the United States has to negotiate; however, it is potentially no less explosive. And like its American counterpart, the Israeli fiscal cliff has two facets – that of government expenditure and that of state revenues from taxation. Bank of Israel Governor Stanley Fischer is well-acquainted with the data and, as said, he is also closely familiar with the players in the arena. He therefore knows that the government cannot deliver the goods on both ends. That is, no government would be able to raise taxes and, at one and the same time, cut billions off its budget, thus inevitably slashing the essential services funded by the state budget.

Before we discuss the recommendations made by the Bank of Israel governor, here is a brief explanation. When dealing with the state budget, the Israeli government has to take into account two laws, or rules, which each stands on its own — the deficit bill, on the one side, and the expenditure rule, which pertains to the overall budget expenditure, on the other.

The deficit bill, as indicated by its name, specifies the government budget deficit (which at the moment, following a sharp hike, implemented contrary to the Bank of Israel governor’s position, amounts to 3% annually). The overall budget expenditure is the figure that determines the percentage by which the government may raise its budget from one year to the next (currently standing at a 2.7% increase going from 2012 to 2013). According to conservative estimates, the [Israeli] government is short of some 5 billion shekels [more than $1.32 billion] in tax revenues, which it needs in order to meet its deficit target for this year — and this, barring any serious global or local economic crisis that would increase the budget deficit even more.

To meet its overall budget expenditure, the government has to cut down its budget by 12 billion to 14 billion shekels [about $3.17 billion to 3.7 billion] according to recent estimates of the Bank of Israel. And if matters are not complicated enough as it is, it should be noted that the two bills, or rules, mentioned above are in no way interrelated. In other words, even if the government unexpectedly gains billions in state revenues, it will still have to meet the overall budget expenditure, as specified in the expenditure rule. So as not to weary the reader, we shall not delve any deeper into the issue, and leave further explanation to the experts.

Back to Fischer and his speeches. And this is what the Bank of Israel governor said on one of those occasions: "If I had to choose, I would prefer that the government meet the deficit target as well as the [overall budget expenditure, as specified in the] expenditure rule. However, if it is necessary to change the expenditure rule and to increase it, which is not desirable, I prefer that this be done through an increase in taxes and a significant reduction in the deficit, preferably even to slightly below 3%."

For the benefit of those of our readers who are unfamiliar with the tone of understatement typical of Fischer’s speeches, here is my interpretation of his address: "If I had to choose, I would prefer that the next Israeli government act responsibly and judiciously, implement the laws and the rules to the letter and meet both the deficit target and the [overall budget expenditure, as specified in the] expenditure rule. However, since I do not trust the next prime minister or the coalition he sets up to do the right thing, I prefer that the [overall budget expenditure, as specified in the] expenditure rule be changed (which would enable a far less significant reduction in the deficit than [otherwise] required). At the same time, I would expect that this be done through an increase in taxes, so that at least as far as the deficit is concerned, we may comply with the laws and rules that we have established and meet the deficit target of 3% or even below that."

Fischer has already demonstrated that he is the real economic leader of the State of Israel. His handling of the crisis of 2008 earned him worldwide acclaim, as well as widespread sympathy in Israel, cutting across political parties and social classes. His statements, such as the one cited above, chart the course of action for the next government, specifying what it should and what it should not do following the election.

In contrast to what we have recently witnessed in the United States and unlike the marathon negotiations between Democrats and Republicans on the ways for coping with the fiscal cliff, the framework for solution [in Israel] has been laid down by Bank of Israel Governor Stanley Fischer in his various speeches on the issue. He has already indicated what the bottom line should be and even outlined the way to reach it.

As for us all, we can only hope that the Israeli economy will not be abandoned to the whims of our local politicians, as it is too precious to be toyed with.