Al-Monitor's Laura Rozen reports on how President Obama overwhelmingly won the Jewish vote despite Mitt Romney’s campaign claim that he was a better friend to Israel. 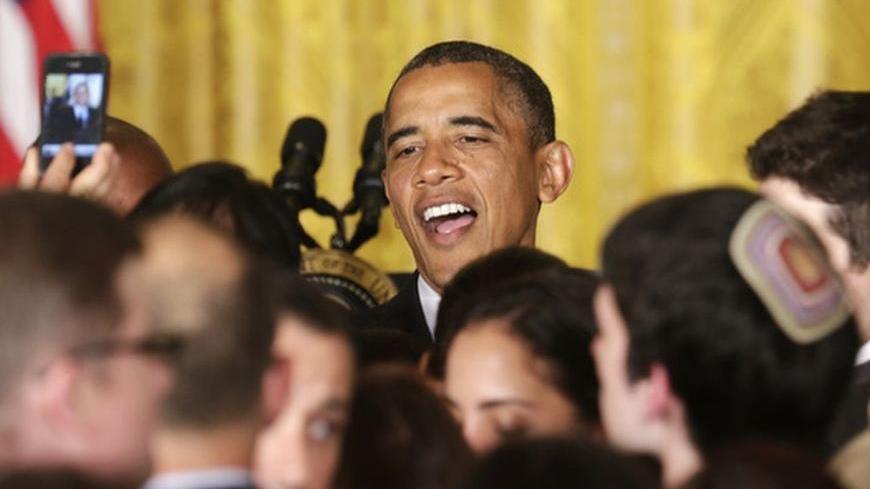 US President Barack Obama greets guests at a Jewish American Heritage Month reception in the East Room of the White House in Washington May 30, 2012. - REUTERS/Kevin Lamarque

Democratic and Republican-aligned groups offered conflicting analysis and spin Wednesday to describe how a newly re-elected President Obama fared among the Jewish American electorate in Tuesday’s polls, after a year in which tens of millions of dollars were spent in Republican ad campaigns depicting Obama as having "thrown [Israel] under the bus," as Mitt Romney put it in September.

Nationwide, Jewish voters went for Obama 70% to 30% for Romney in the 2012 presidential race, according to a survey of 800 Jewish American voters conducted by Gerstein Bacion Agne Strategies for left-leaning J Street. That compared with 74% of the Jewish vote going for Obama in his 2008 race against Republican John McCain. Obama fared similarly among Jewish voters in two key swing states: Florida, where Obama this year won 68% of the Jewish vote, and Ohio (69%), according to the J Street/GBA poll.

The key takeaway, according to pollster Jim Gerstein, is that the 4% drop in the Jewish vote for Obama in the 2012 versus 2008 race is consistent with the modest percentage drop Obama experienced with several other constituencies — including college graduates, whites, independents, voters under 30 and Catholics.

Furthermore, the reason for the drop has little if anything to do with Obama’s handling of Israel or well financed campaigns by Republican Jewish groups to portray Obama as too tough on Israel, Gerstein contends.

Rather, Jewish voters, like most other American constituencies this year, were voting on issues like the economy, health care, Medicare and social security, with national-security issues like Israel and terrorism tied for sixth place among issues, along with abortion, Gerstein said.

“In no way, shape or form was this a narrow victory for Obama when it comes to Jewish voters,” Gerstein said on a J Street press call Wednesday. “The only problem Obama has with Jewish voters is that there is not more of them.”

The Republican Jewish Coalition (RJC), which commissioned a separate poll by Arthur J. Finkelstein & Associates, argued Wednesday that while Jewish Americans remain a strongly Democratic constituency, there has been important growth in the number of Jewish Americans voting Republican.

“The Jewish community is one of the areas that keep Republicans competitive,” Ari Fleischer, the former Bush White House spokesman and an RJC board member, told reporters on the RJC press call Wednesday. “The Jewish vote remains a strongly Democratic vote — but much less strong than it used to be.”

And one reason for 30% of the Jewish electorate going for Romney this year was because of “unease” over “the president and Israel,” Fleischer contended. Unease stoked by a ”buyers’ remorse” ad campaign the RJC ran targeting Jewish voters, featuring Jews who voted for Obama in 2008 who expressed regret over the decision.

The election results speak for themselves, Democrat Gerstein countered: “What they are doing is not working. You can’t walk away from an election where your guy gets 30% of the vote and say ‘let’s keep doing what we’ve been doing.’”

J.J. Goldberg, an expert on Jewish American politics who serves as editor-at-large of the Jewish Daily Forward, said in general, Jewish voters disappointed with Democratic presidents have resisted moving to the Republican party since 1992 because of the growing influence in the GOP of the Christian Right.

“The people disappointed with Obama … generally speaking … will not go to the party of Pat Robertson and Paul Ryan,” Goldberg, the author of Jewish Power: Inside the American Jewish Establishment, told Al-Monitor in an interview Wednesday.

Goldberg added, however, that the relentless campaign portraying Obama as pressuring Israel may have had an effect on some members of the American Jewish community. “Here is the thing. The drumbeat for Obama being bad for Israel — which has been relentless — there are people influenced by that,” Goldberg said. "And it’s not negligible. I believe that it could be as high as 10%.”

Gerstein countered, arguing that about 4-5% of 2% of the American population involves very small numbers of voters — less than 0.01% of the US electorate, and not statistically significant of any wider trend in Jewish voters shifting toward Republicans because of Obama’s stance on Middle East issues.

“I do campaigns, and look at the campaigns,” Gerstein continued. “In this election, you have an evenly split country” — as Obama won by 1-2% overall. “In this one area [of the Jewish electorate], you have a 40% split [of Jewish voters favoring Obama]. The idea that what they are doing is working is laughable.”

Laura Rozen writes the Back Channel news-blog for Al-Monitor. She previously served as senior foreign policy reporter for Politico and Yahoo News, and wrote the “Cable” blog for Foreign Policy magazine. She is based in Washington, DC. You can follow her on Twitter at @lrozen.