US Considers Offering 'More for More' to Iran

Al-Monitor's Barbara Slavin and Laura Rozen have confirmed that the Obama administration is looking for a solid bilateral channel with Iran that will augment multilateral talks and enable the two sides to bargain without five other parties in the room. 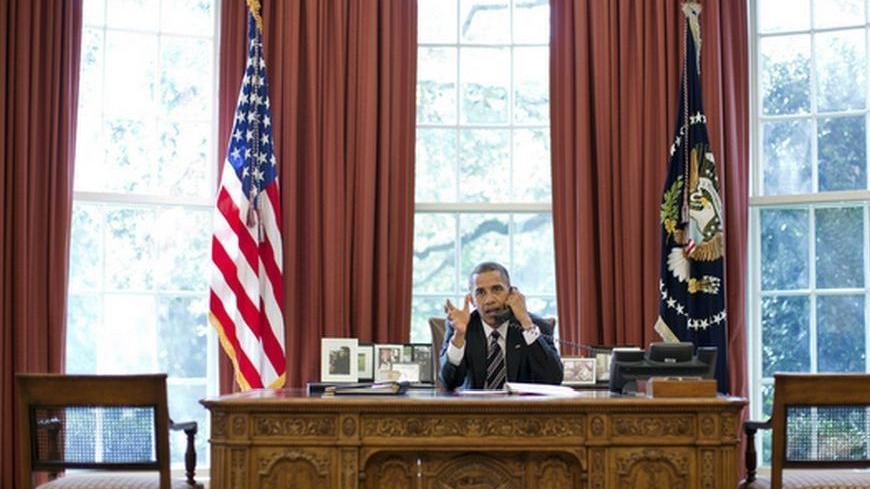 President Barack Obama speaks on the phone with Israel's Prime Minister Benjamin Netanyahu in the Oval Office in this Sept. 28, 2012 White House handout photograph. Obama and Netanyahu expressed solidarity on the goal of preventing Iran from acquiring a nuclear weapon, amid signs of easing tensions over their differences on how to confront Tehran. - REUTERS/Pete Souza

A congressman from Ohio and a Shiite cleric from Mashhad, Iran, could well determine how successful President Barack Obama’s second term will be.

On the domestic front, Obama has six weeks to negotiate a “fiscal cliff” deal with House Speaker John Boehner to avert tax increases and spending cuts that could plunge the United States back into recession.

In foreign policy, the president has longer, probably five months, to defuse a crisis with Iran before that country becomes embroiled in its own presidential election “campaign” when, as was the case in the United States, major foreign policy initiatives are likely to be placed on hold. Here a deal must be struck with a man that Obama cannot invite to play golf or even talk to on the phone: Ayatollah Ali Khamenei.

Al Monitor has confirmed that, with the US elections now over, the US administration is looking for a solid bilateral channel that will augment multilateral talks and enable the two sides to bargain without five other parties in the room.

Russia, a key member of the P5+1 (the five permanent members of the UN Security Council plus Germany that have been talking, so far fruitlessly, with Iran) expressed support Monday for direct US-Iran talks.

Deputy Foreign Minister Sergei Ryabkov, Russia’s chief negotiator in the nuclear talks with Iran, told the Financial Times that such talks will “not create a problem for us … We want something that will bring everyone out of this morass.”

Al-Monitor has also learned that the US is mulling the expansion of a “more for more” offer: more verifiable nuclear curbs from Iran in exchange for greater US concessions, including some sanctions relief. The “more for more” offer, according to one source apprised of administration deliberations before the US elections, would update the “stop, ship, and shut” offer regarding 20% uranium enrichment to get more verifiable limits on the rest of Iran’s nuclear program. The US has not yet briefed its partners in the P5+1 but will get a chance to do so when political directors from the group meet in Brussels on Nov. 21. Another multilateral meeting with Iran could follow shortly after that.

“Iran is expecting the next round (of talks with the P5+1) for the last week of November because they would host the IAEA delegation in December,” former Iran nuclear negotiator Hossein Mousavian told Al-Monitor Monday. “A political compromise between Iran and the P5+1 would facilitate an IAEA & Iran agreement on technical issues.”

A European Union spokesman told Al-Monitor, however, that there was “no indication as yet” when the P5+1 and Iran would next meet.

US officials are also ready to widen the agenda in direct talks to discuss other issues beyond the nuclear standoff, Al-Monitor has learned. The key question is whether Iran is now ready. Since Obama’s re-election, Iran has sent multiple signals that it would be prepared to sit down one-on-one with the United States — something it has avoided since 2009.

An unusual post last week on the Iranian Intelligence Ministry website also highlighted Iran’s preference for a diplomatic rather than a military solution. There have been persistent reports of back-channel talks between the US and Iran already occurring, though US and Iranian officials insist there is no deal yet on bilateral nuclear talks. Iranian Foreign Minister Ali Akbar Salehi met with influential Americans during his visit to the United Nations in New York in September. And White House nonproliferation chief Gary Samore has had contacts with an Iranian diplomat posted to Turkey, according to an Iran analyst who spoke to Al-Monitor on condition of anonymity.

Of course, there have been similar meetings and charm offensives before that came to naught. Last spring, before the resumption of multinational negotiations, the US and Iran sent conciliatory signals to each other but the talks quickly stalled.

In both countries, domestic economic realities could provide context for diplomatic progress. The United States, in a time of fiscal constraint, cannot afford a third war in the region and is banking on savings from withdrawing American forces from Afghanistan to help reach a budget deal with Republicans. Iranian support, even if only tacit, for the Afghan government would ease the US exit and help Obama restore the domestic US economic strength that is the only solid basis for sustained global leadership.

Iran, too, may be looking over its own fiscal cliff. US economic sanctions against Iran have hurt ordinary Iranians as the US Treasury has become a perpetual motion machine, slapping new penalties on Iranian individuals and institutions on an almost weekly basis. Iranian officials are right to question whether Obama will be able to roll back this onslaught even if they compromise on the nuclear front.

The US "more for more" approach is as yet more concept than negotiating position. But as with the fiscal cliff negotiations with Boehner, where the devil is in the details and a deal has also been elusive, there is the option of going big on Iran to avoid further crisis and conflict.

Barbara Slavin is Washington correspondent for Al-Monitor and a senior fellow at the Atlantic Council, where she focuses on Iran. She tweets at @BarbaraSlavin1.

Laura Rozen writes the Back Channel news-blog for Al-Monitor. She previously served as senior foreign policy reporter for Politico and Yahoo News, and wrote the “Cable” blog for Foreign Policy magazine. She is based in Washington, DC. You can follow her on Twitter at @lrozen