Concerns Mount That Israel Is Losing Patience on Iran Plan

As the Obama administration doubles down on sanctions, some in Washington worry that Israel is running out of patience with the US, writes Laura Rozen. Defense Secretary Leon Panetta and other officials urge patience to see if tough new economic sanctions bring about a diplomatic resolution. 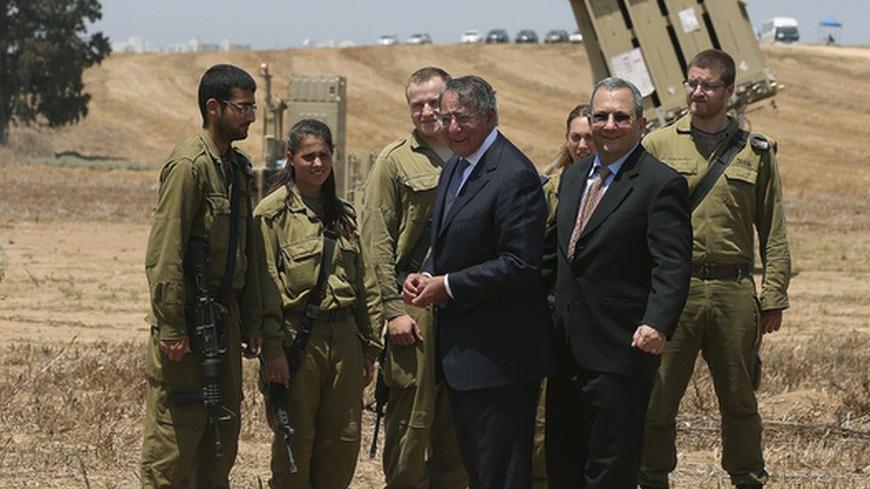 As the Obama administration doubles down on sanctions, concerns are mounting in Washington that Israel is running out of patience with the US approach and may move to strike Iran in the fall.

“Right now the Iranian regime believes that the international community does not have the will to stop its nuclear program,” Israeli Prime Minister Benjamin Netanyahu said at a news conference with Panetta in Jerusalem Wednesday. “This must change, and it must change quickly because time to resolve this issue peacefully is running out.”

Panetta urged patience to see if tough new economic sanctions bring about a diplomatic resolution. However, he said, “if they continue and if they proceed with a nuclear weapon ... we have options that we are prepared to implement to ensure that that does not happen.”

“The problem we face is, to the Israelis, it looks like we are dithering and that we are going to keep on dithering until they lose their opportunity to act,” said Patrick Clawson, deputy director of research at the Washington Institute for Near East Policy, in an interview with Al-Monitor shortly after his research organization held discussions with former members of Israel’s strategic dialogue. “That is not confidence-building for the Israelis.”

“The US administration’s attitude is, we’ve got to wait to see if [the sanctions are] working.”

“On sanctions, … the big question is what political impact they have, not what economic impact they have,” Clawson said. “It’s hard to know why the Iranians show up for negotiations unless sanctions are responsible.”

Three sets of high-level six-nation nuclear talks with Iran this past spring have failed to narrow differences on a possible confidence-building measure that would end Iran’s higher-level 20% enrichment. Washington will not agree to another P5+1 political directors meeting with Iran if there is no serious prospect of progress toward an agreement, sources told Al-Monitor. European Union foreign policy chief Catherine Ashton and chief Iran nuclear negotiator Saeed Jalili are due to confer this month to see if there’s a basis for further negotiations.

“We are doubling down on the dual track,” a European diplomat involved with the negotiations told Al-Monitor, a reference to turning to the sanctions track while continuing to keep the diplomatic channel open with Iran for it to possibly change its mind.

American diplomats said there is significant value to the diplomatic channel despite the lack of progress to date.

“My feeling is it’s very, very important in terms of mobilizing support to see if there is some give in Iran positions,” former US Ambassador to Iraq Jim Jeffrey said Tuesday at the Washington Institute for Near East Policy. “As we go down to the wire, there is some hope for that particular channel.”

Jeffrey was present at P5+1-Iran talks held in Baghdad in May, and in his previous posting as US ambassador to Turkey, was informed of negotiations under which Iran would send out its stockpile of fissile material to Turkey.

“Iran put its 20% enrichment on the table” in the recent negotiations with the P5+1, and has previously agreed to move its stockpile to Turkey, Jeffrey said, acknowledging lingering doubts about whether Iran was prepared to follow through. “How much is real; how much is just negotiations?”

And the United States doesn’t currently have better means of talking with the Iranians on the nuclear file than through the P5+1, though it has several channels for passing messages, Jeffrey said.

“We offered to meet bilaterally,” Jeffrey said. “They would like to talk with us. But that did not include a sit-down with us.” More broadly, Jeffrey said, “we do not have a clear position, accepted by the administration, Congress, think tanks, communicated to allies, a core position on Iran. Is it our goal to eliminate this regime, or deter, block it, until we can figure out what our policy is? The Iranians are confused about our goals.”