The merger of two right-wing Israeli political parties under Prime Minister Benjamin Netanyahu means a commitment to expanding settlement in Palestinian land, Geoffrey Aronson writes, and marks the failure of President Barack Obama's administration to end the Israeli occupation of the West Bank, East Jerusalem and the Gaza Strip. 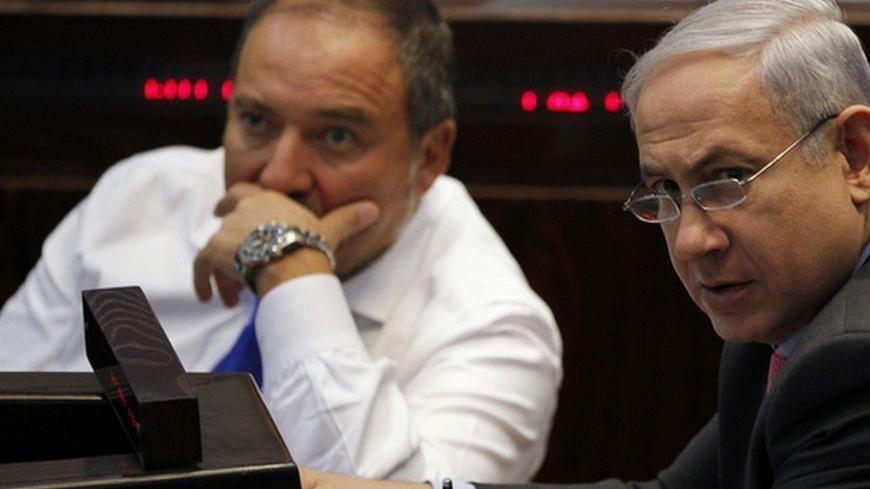 Yesterday [Oct. 25], Israeli prime minister Benjamin Netanyahu announced the merger of his ruling Likud Party with its coalition partner "Israel is Our House” (Israel Beitanu), headed by foreign minister Avigdor Lieberman. The deal gives Netanayhu a lock on the premiership in the election scheduled for early 2013, and cements in place an Israeli government committed to settlement expansion and the enfeeblement of the tottering Palestinian Authority headed by the long-suffering Mahmoud Abbas.

This is the distressing, unanticipated legacy of the administration of President Barack Obama and its failed effort to end Israel’s occupation of the West Bank, East Jerusalem, and the Gaza Strip.

The president’s selection soon after his election in 2008 of former senator George Mitchell as special envoy and the articulate and forceful focus on the need for a “freeze” in Israeli settlement activity in the West Bank and East Jerusalem were widely viewed as clear indications of Obama’s commitment to lead the parties to an agreement that reflected the vital national security interests of the United States — the creation of two states, Israel and Palestine, at peace with each other and secure within recognized borders.

Secretary of State Hillary Rodham Clinton set the aggressive tone for this initiative in May 2009 when she said, “[President Obama] wants to see a stop to settlements — not some settlements, not outposts, not ‘natural growth’ exceptions. That is our position. That is what we have communicated very clearly.”

This effort collapsed absolutely. Settlements, the initial focus of the Obama administration’s effort and the key barometer of the enduring contest between Israelis and Palestinians to control Palestine’s destiny, are today flourishing throughout the West Bank and East Jerusalem.

“[Israel’s] goal was to prevent the establishment of an Arab state between the Jordan River and the Mediterranean Sea,” noted Israeli columnist Nahum Barnea recently. “Today, with 300,000 settlers living in Judea and Samaria, with a powerful lobby and compensation arrangements from Gush Katif that would amount to hundreds of billions of shekels if they were to be applied to the West Bank, you could say that the mission has been accomplished.”

Washington’s commitment to a settlement freeze buckled in the face of Israeli opposition. As a consequence, Obama left the United States’ vital interest in an agreement hostage to the pathologies that dominate bilateral Israel-Palestinian relations.

This breakdown in Washington’s diplomatic effort to address the occupation is unprecedented. Jeffrey Feltman, UN undersecretary for political affairs, acknowledged this state of affairs at an Aug. 22 briefing before the Security Council, where he noted that “in the short term the international community may not be in a position to succeed in helping the parties bridge their political differences.”

Obama’s singular achievement on this issue is therefore his most dubious one. US interest in and leadership of the effort to end the conflict has atrophied to a point not seen since the aborted Rogers Plan, creating a policy vacuum that would lead to the October 1973 war. Today, policy makers and the public alike have surrendered in the face of the passions that drive the conflict. They are bored with its grinding hopelessness, distracted by the more hopeful and dramatic narratives of the Arab Spring, at once complacent about the price to be paid for failure to end the occupation and settlement and resigned to the victory of the settlers.

National Union chairman and MK Ya’akov Katz is representative of settlers who smell victory. “Despite the freeze, settlement in Judea and Samaria increased this past year,” he said. “With the current rate of growth, we will be about 400,000 Jews before the next election campaign, and within four years, we will be about half a million Jews in Judea and Samaria. If you include East Jerusalem, we will number more than a million Jews, at which point the revolution will have been completed.”

Some will argue that diplomatic disengagement by the international community is as it should be. It has become commonplace to declare that the United States and others cannot want peace more than the parties themselves. Obama himself has said as much. These views are usually expressed in the context of rationalizing continuing stalemate, which policymakers readily acknowledge is not only unsustainable, but also contradicts the interests of the United States and its view that the interests of Israelis and Palestinians alike are best served through the creation of a Palestinian state in territories occupied by Israel in June 1967.

The diplomatic efforts exerted by US administrations have manifestly failed to enable creation of a Palestinian state. Many Israelis applaud this failure as much as Palestinians condemn it. Dov Weisglas, Prime Minister Ariel Sharon’s top negotiator, wrote recently, “A Palestinian once told me that ‘Oslo’ [the Oslo Accords] was ‘a brilliant Israeli arrangement.’ ‘How?’ I asked. ‘It is the only prison in the world where the prisoners are responsible for their own support, without any participation from the management.’” “Israel,” continued Weisglas, “enjoys all the privileges of sovereignty over the Palestinian territories, without the sovereign’s obligations; that is what ‘Oslo’ means today.”

If the first years of Israeli rule were once described as a “benevolent occupation,” the Oslo era, now almost twenty years along, is unabashedly considered by Israelis and Palestinians alike to be a deluxe occupation — for Israel, which benefits from the settlement and security advantages of its presence in the West Bank and the perception that its occupation of the Gaza Strip has ended without the burdens of financing the direct rule of almost 3 million Palestinians.

This Israeli objective is not new. The building blocks of a permanent Israeli presence in the West Bank and other territories occupied by Israel in June 1967 were put in place by a coalition of the Israeli security and political establishments well before the settlement movement went into overdrive almost four decades ago. In this respect, the reality for the West Bank has long been some form of permanent Israeli territorial hegemony — an Israeli version of the one-state option.

Settlements may be the most recognizable symbol of Israel’s intentions. But they are only one expression of a widely held Israeli view that Israeli security is enhanced by the deployment of its forces and citizens beyond the June 1967 borders. When this view has changed — in Sinai as a result of the peace agreement with Egypt in 1979 and in the Gaza Strip in 2005 — continued Israeli civilian presence in these areas became unsustainable.

The Palestinian Authority may be derided as “an authority without authority,” even by Chairman Mahmoud Abbas himself, but those who mourn the passing of the opportunity for ending occupation and creating a Palestinian state need to address the new reality that has evolved during Obama’s watch in the Gaza Strip, with a population approaching 2 million under the leadership of the Islamic resistance organization, Hamas.

Israel exercises effective but diminishing control over the area, and the permanent evacuation of settlements and the Israel Defense Forces from Gaza, however problematic, is a settled element of Israeli policy that Palestinians in the West Bank can only dream about. In Gaza, the two-state option remains a key aspect of Palestinian thinking and action, even as a growing number of the Palestinian secular leadership and many in the international community warn of its passing. No one in Gaza is considering giving back the keys to Israel.

President Obama has defined the contemporary scene in the Middle East as an “era of transition.” The current malaise among policy makers and the diplomatic “freeze” that defines the US view of the conflict is ill-placed. Occupation and settlement engender a pervasive sense of Palestinian insecurity, just as the absence of violent Palestinian opposition to the status quo breeds complacency among Israelis.

Settlement is a zero-sum game, and as Israel’s demand for new settlements grows, so too does the threat to Palestinian lands that are critical to the community’s survival. Simply announcing the success of the settlers and the closing of the door to a two-state solution will not end this story, or immunize the broader international community, including the next American president, from its corrosive effects.