The Quartet report on the obstacles before the two-state solution is a compilation of old findings, and it is easy for Israel's prime minister to dismiss its recycled condemnations. 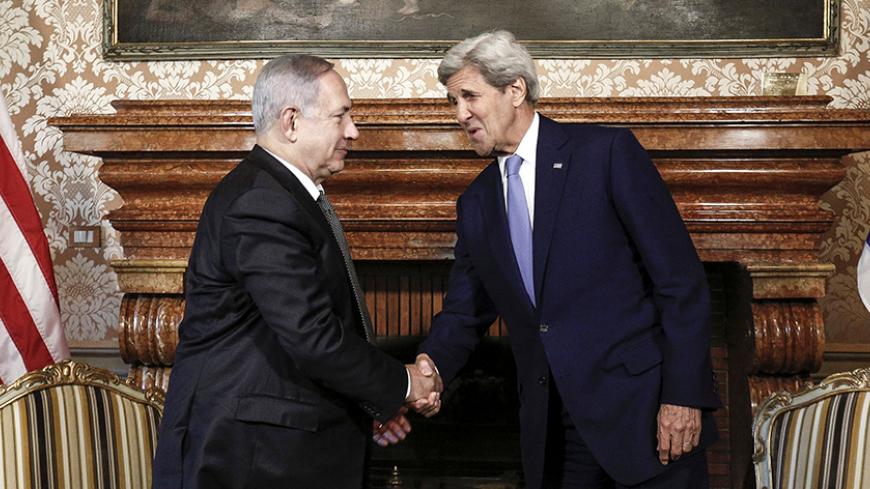 Thousands of words have been written in recent months about Prime Minister Benjamin Netanyahu’s efforts to soften the report compiled by the Middle East Quartet on the situation in the Israeli-occupied territories. On June 26, a few days before the report’s publication, Netanyahu flew to Rome to try to convince US Secretary of State John Kerry to limit its fallout.

Associates of the prime minister whispered to reporters that were it not for the intense Israeli diplomatic efforts, Israel would have emerged from the report badly scarred. Perhaps. Nonetheless, the report bearing the signatures of top American, Russian, European Union and UN diplomats is not judged by its content or its style. The Quartet document will be evaluated according to the length and sharpness of the fangs the members sink into the two sides, especially the stronger of the two. The pain may force the two nations to treat the dangerous paralysis they have entered and its mounting death toll.

In Israeli-Palestinian diplomacy, there are no points for participation that does not yield results. Absent the ability of both sides to reach the finish line under their own steam, or even to present themselves at the start line, peace lovers are pinning their hopes on rescue by external forces. Every new “peace initiative,” well-attended international conference and fresh report sets them off, and the higher they hope, the harder they fall. Deadly terror attacks in Kiryat Arba while the report was being published or a missile fired from Gaza at Israel the day after provide ample material for Netanyahu to spin to his advantage.

Responding to the Quartet’s report July 1, the prime minister’s office said, “In the 24 hours before publication of the Quartet report, Palestinian terrorists stabbed and shot innocent Israelis three times. … Palestinian praise for murderers today inspires those who will strike tomorrow.” Netanyahu did not miss the opportunity to accuse the Palestinian leadership’s praise for the terrorists of “moral bankruptcy" that "leaves little doubt about its true intentions.”

The horrific stabbing by a Palestinian youth of a 13-year-old Israeli girl in her bed in Kiryat Arba pushed the Quartet’s report to the back pages of the news.

The real story behind the report is that there’s nothing new in it. All the facts are known to one and all, and all the recommendations are regurgitated. For example, the report "reveals” that razing Palestinians' homes and preventing any Palestinian development in the Israeli-controlled Area C of the West Bank is “eroding the viability of the two-state solution. This raises legitimate questions about Israel’s long-term intentions.” This finding can be easily googled and found in previous reports by the Peace Now and B’Tselem organizations. Why put the officials of the Quartet to all this trouble? A copy-paste from the June 13 report of the UN Coordinator of Humanitarian Affairs would have done the job. It contains more detailed and no less current data. For example, it says that Israeli policy in certain parts of the West Bank and East Jerusalem pushes aside the Palestinians, and the mass demolitions “exacerbate the risk of forcible transfer facing Palestinian communities.”

One can go further back still to the Mitchell Report, prepared at the request of former US President George W. Bush. “Palestinians are genuinely angry at the continued growth of settlements and at their daily experiences of humiliation and disruption as a result of Israel's presence in the Palestinian territories. Palestinians see settlers and settlements in their midst not only as violating the spirit of the Oslo process, but also as an application of force in the form of Israel's overwhelming military superiority, which sustains and protects the settlements. … A cessation of Palestinian-Israeli violence will be particularly hard to sustain unless the [government of Israel] freezes all settlement construction activity.” Already in May 2001, Middle East envoy George Mitchell had recommended that Israel “should freeze all settlement activity, including the ‘natural growth’ of existing settlements.” Then, too, the Palestinian Authority was called upon to help restore confidence between the sides by condemning terrorism and punishing its perpetrators.

The foreign ministers of the Quartet determined in their report that Israeli settlement policy and Palestinian terrorism distance the prospects of implementing the two-state solution and create a de facto single state for two peoples. Netanyahu protests the symmetry drawn between Israeli measures deepening the occupation and measures to end the occupation, taking issue with “any attempt to draw moral equivalence between construction and terrorism.” He opposes what he calls the perpetuation of "the myth that Israeli construction in the West Bank is an obstacle to peace.” He cites as proof to the contrary that when Israel froze settlement construction and uprooted all Israeli settlements from the Gaza Strip in 2005, "It did not get peace. It got war.”

To refute the Quartet’s allegation that the Jewish presence in the West Bank prevents the achievement of a two-state solution, Netanyahu notes with pride that 1.8 million Arab citizens live in Israel. Their presence does not constitute a barrier to peace, the prime minister asserts. “It is a testament to our pluralism and commitment to equality.” He sees no contradiction between his promise to “discuss with the Quartet envoys ways to explore moving toward a genuine," "negotiated peace based on [his] vision of two states for two peoples” and the approval he gave the next day to build new homes in the settlements. That dichotomy will provide the Quartet with material for its next report.

Every report bearing the signatures of the leaders of the United States, Russia, Europe and the United Nations that loses any significance over time lends credence to the belief that whatever is not achieved by force will be achieved by more force. Almost 200,000 settlers lived in the West Bank at the time of the Mitchell report; today, that number has reached 380,000. It’s time for the Quartet to present the sides with two alternatives bearing an expiration date. The first is the establishment of a Palestinian state within the 1967 borders, alongside a pluralistic and egalitarian Jewish state. The second is the imposition of Israeli sovereignty over the whole of the West Bank and Gaza Strip, along with all their residents, in the hope that the two people will learn to live together in pluralism and equality.