Despite UN Security Council Resolution 2334 and US President Donald Trump's efforts to resume the Israeli-Palestinian peace talks, Israel has approved plans to develop its first new settlement area in 25 years. 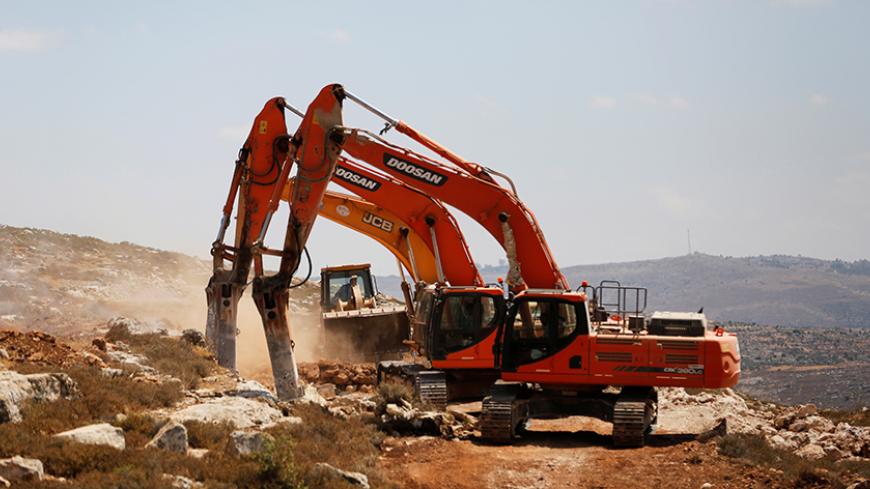 GAZA CITY, Gaza Strip — While US President Donald Trump has been making efforts to resume the Palestinian Authority-Israel peace talks that have been stalled since 2014, on June 7, the High Planning Committee in the Israeli civil administration approved plans to build the first new Israeli settlement in the West Bank in the 25 years since the signing of the Oslo Accord in 1993. It also approved a program to build 2,000 new housing units in other settlements including Kiryat Arba in southern Hebron and Kfar Tapuach in Nablus, the West Bank.

The plans consist of 102 housing units in a new settlement to be called Amichai, north of Ramallah in the center of the West Bank. The settlement will house the residents of the Amona outpost who were evicted in February after the Israeli Supreme Court ruled that the settlement was illegally constructed on private Palestinian land.

During the Oslo process, Israel rejected the Palestinian demand for an absolute settlement freeze but agreed to refrain from building new settlements. However, dozens of settlements known as “residential neighborhoods” went up within the areas that were developed prior to the Oslo Accord. The new plans are for the first settlement in a new geographic area since the signing of the Oslo Accord.

During a Knesset ceremony marking 50 years since the West Bank was occupied, Israeli Prime Minister Benjamin Netanyahu said June 6, “We will continue to preserve the settlement enterprise, and everyone is entitled to live in his home and will not be removed from his home. I am privileged to be the prime minister to build a first new settlement in decades.”

The Palestinian Foreign Ministry condemned Netanyahu's remarks June 7, saying it “perceives the escalation as very dangerous in terms of building settlements and its implications for the chances for a peace based on the two-state solution.”

He added, “What also encouraged Israel to make such a decision is that US President Donald Trump did not raise the issue of settlements during his May 23 visit to the Palestinian territories, which indicates that the United States provides Israel with a political cover to carry on with the settlement activities in our territory.”

He affirmed that the Israeli decision to build a new settlement in the West Bank “would dissipate all hopes to resume efforts toward an agreement.” He added, “We will appeal soon to the UN Security Council to follow through on its resolution to cease settlement activities and call on the international community to implement the resolution. We are also moving forward toward referring the issue to the International Criminal Court.”

Khaled Mansour, a member of the political bureau of the Palestinian People's Party, told Al-Monitor that the Israeli decision proves that Israel is determined to continue to build settlements on Palestinian territory in the West Bank.

Mansour said, “The Israeli decision undermines the US efforts to resume talks and is a violation of dozens of international resolutions that call for the dismantling of settlements in the West Bank. These include Resolution 452 of 1979 providing for desisting from establishing settlements even in Jerusalem, and Resolution 465 of 1980 to dismantle Israeli settlements.”

He stressed that Israel's ongoing settlement activities would make peace even more elusive, arguing, “Settlements have turned the West Bank into isolated cantons, making it impossible to establish an independent and coherent state.”

Antoine Shalhat, the director of Madar's Israeli Scene Supplement, told Al-Monitor that the establishment of a new settlement in the West Bank is tantamount to “an Israeli declaration that there is no political compromise on settlements.” He said that the successive Israeli governments have tried to outdo one another building settlements in the West Bank.

Shalhat added, “The domestic, regional and international circumstances have been favorable for the Israeli government to issue such a decision. The extreme right, which perceives settlement activities to be a priority, is in control of the Israeli domestic arena. At the regional level, the Arab region is preoccupied with internal problems and crises and is more open than ever to setting up friendly ties with Israel. This is true particularly following Trump's visit to Saudi Arabia. Also, the situation at the international level is to the advantage of Israel. Unlike the previous US administrations, the current administration lacks an anti-settlement stance.”

In a May 17 interview with Israel Today, US Ambassador to Israel David Friedman said the United States has “no demand for a settlement freeze.”

Independent political analyst Farhan Alkam told Al-Monitor that Netanyahu is promoting the idea that he is the bravest Israeli prime minister yet, with an eye toward bolstering his influence and popularity in Israel.

Alkam said, “I believe that there are other purposes behind the decision. Netanyahu also intends to feel the pulse of the US administration and determine how serious it is in supporting Israel, as no US position was declared in this regard. On the other hand, Netanyahu may fear that Trump will back down from his promise of moving the US Embassy from Tel Aviv to Jerusalem, and thus he wanted to make a political gain at another level.”

In light of the Israeli move, Trump's efforts to resume talks do not seem to be bearing fruit, as it is the Palestinians' firm position that the settlement enterprise is a key obstacle to any future settlement agreement.