Iran undercut its own negotiators by withholding from them key details of its nuclear program, according to a new book by a former senior Iranian diplomat. Barbara Slavin writes that the book makes the failed diplomacy of the past decade easier to understand, and concludes that the key is to improve US-Iran relations. 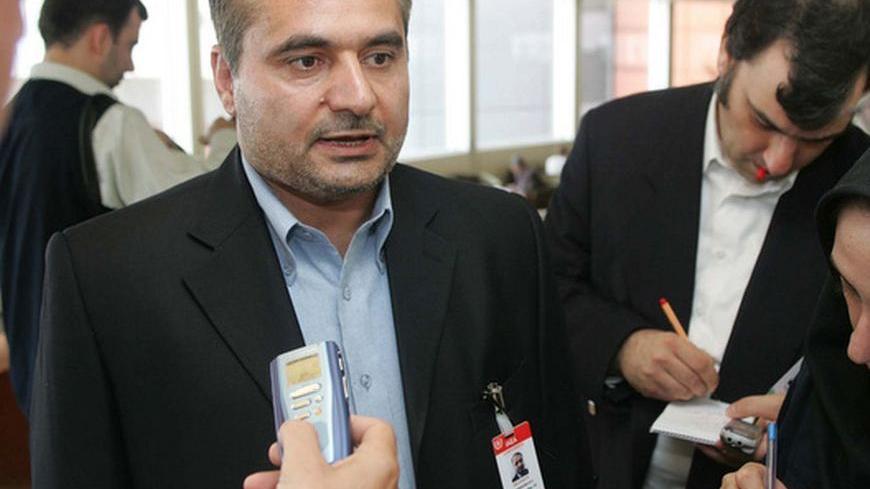 Seyed Hossein Mousavian, Head of the Iranian delegation to the International Atomic Energy Agency (IAEA) talks to journalists during a closed-door meeting of the IAEA 35-nation Board of Governors in Vienna June 14, 2004. - REUTERS/Herwig Prammer

Iran undercut its own negotiators by withholding from them key details of its nuclear program, according to a new book by a former senior Iranian diplomat.

The book, Iranian Nuclear Crisis: A Memoir by Seyed Hossein Mousavian, reveals nuggets about Iran’s nuclear diplomacy and internal politics that make the failed diplomacy of the past decade easier to understand — and do not portend well for the future.

A top negotiator with the Europeans from 2003-2005, Mousavian notes that Iranian negotiators in 2003 did not know that Iran had obtained from Pakistan drawings for advanced centrifuges known as P-2s along with less sophisticated technology.

“Once again, Iran was acknowledging facts after they had been discovered by others,” Mousavian writes of what happened after the International Atomic Energy Agency (IAEA) revealed the P-2 drawings. “I more than once heard important news for the first time from IAEA officials or the foreign media and then had to work on reformulating plans to manage the crises that the news gave rise to.”

Despite such major impediments, Mousavian defends the record of his team compared to negotiations that have taken place since Mahmoud Ahmadinejad took office.

While Mohammad Khatami was president, Mousavian notes, Iran was not referred to the UN Security Council and did not face the array of draconian sanctions that are dragging down its economy today. Iran had good ties with the Europeans and hopes of starting a dialogue with the United States. It still made some progress on its nuclear program and only temporarily and voluntarily suspended elements of that program to keep negotiations going and avoid multilateral punishment.

That all changed when Ahmadinejad was elected in 2005.

Mousavian writes of meeting the new president, who was interviewing him as a candidate for foreign minister: “We did not have a single point of agreement in our basic views … He told me in clear terms that he did not care about the IAEA resolutions, nor the possible referral of the nuclear file to the UN Security Council … He even said he would welcome sanctions by the international community because these sanctions [would force] the country to become more independent and self-sufficient.”

Mousavian told Ahmadinejad that he had had similar views in 1980 when he was 23 years old “but that I had modified them after more than two decades of diplomatic experience.”

While he gives some credit to Ahmadinejad for advancing the Iranian nuclear program, Mousavian emphasizes the high costs of the president’s confrontational style.

There were also costs for Mousavian personally: he spent ten days in 2007 in Tehran’s dreaded Evin prison as punishment for criticizing Ahmadinejad and has been living and working for the last few years at Princeton University.

A long-time advocate of a “grand bargain” with the United States, Mousavian believes that bilateral diplomacy with the US is essential and that the nuclear program can be leveraged to promote reconciliation after 33 years of estrangement. Like many analysts of the nuclear issue, he faults both Iran and the US for missing numerous opportunities and failing to produce a road map or vision for engagement.

In the book and in appearances this week in Washington, Mousavian has put forward his own ideas for a resolution that include US and international recognition of Iran’s right to enrich uranium in return for Iranian agreement to open its program to maximum international supervision.

At the Arms Control Association on Monday (June 4), Mousavian suggested that Iran be allowed to continue to enrich uranium to 20% U-235 if it agrees to send out any stockpile not needed for medical purposes.

However, the US and its partners are demanding at a minimum that Iran stop enriching uranium to 20%, send out the entire stockpile of more than 100 kilograms of 20% uranium and close a facility called Fordow near Qom — whose existence, Mousavian writes, he only learned of when President Barack Obama revealed it in a 2009 press conference.

At the Carnegie Endowment for International Peace on Tuesday (June 5), Mousavian said he believes that Obama was sincere in efforts to restart diplomacy in 2009 and that Ahmadinejad has also evolved over time. According to Mousavian, Ahmadinejad wants talks with the US on a variety of issues. In February 2011, Mousavian said, Iran asked Marc Grossman, the US special representative for Afghanistan and Pakistan, to pay an official visit to Iran to discuss Afghanistan.

“They were going to open another door,” Mousavian said of the offer, but “the US declined.”

Asked about this, a senior US official told Al-Monitor that an offer emerged from Iranians taking part in so-called Track II discussions with former US officials, including former US ambassador to Egypt Frank Wisner.

Grossman responded “through the same channel that he could not go but would be delighted to see an Iranian representative to talk about Afghanistan in Kabul,” the senior official said. Iran did not follow up, added the official, who spoke on condition of anonymity because he was describing confidential diplomatic communications.

It has been the pattern of US-Iran relations that when one side is ready to move, the other is not and vice versa. On both sides, domestic politics frequently inhibit progress, with hard-liners quick to pounce on perceived naïveté or “excessive” concessions.

Mousavian says the key is to improve US-Iran relations, however hard that is to envision at this time.

“There will be no final resolution to the issue of Iran’s nuclear program as long as the bilateral relationship … continues to be dominated by hostilities, threats and mistrust,” he writes.

Barbara Slavin is Washington correspondent for Al-Monitor and a senior fellow at the Atlantic Council, where she focuses on Iran. She is the author of a book on US-Iran relations, Bitter Friends, Bosom Enemies, and tweets at BarbaraSlavin1.