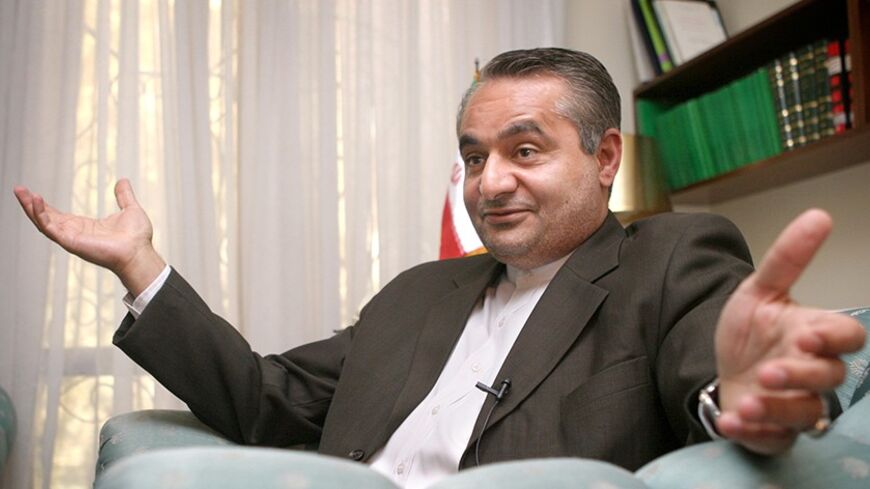 For the last few years, Al-Monitor's Seyed Hossein Mousavian has been among the most prolific Iranian writers in the United States promoting US-Iran reconciliation and trying to explain his complicated and often maligned country to American audiences.

In a new book, "Iran and the United States: An Insider’s View on the Failed Past and the Road to Peace," Mousavian continues this mission while revealing new details of fruitless overtures by Iranian leaders to ease hostilities over the past two decades.

For students of this bitter history, the book — co-authored by Shahir ShahidSaless, a political analyst and freelance journalist who, like Mousavian, is also an Al-Monitor contributor — is most interesting for its vignettes and quotes from senior Iranian officials at crucial moments in US-Iran relations. For example, Mousavian puts the reader in the room with Qassem Suleimani, commander of the shadowy Quds Force of the Revolutionary Guard Corps, at the time that Iran was deciding to work indirectly with the United States to overthrow the Taliban in Afghanistan after the Sept. 11, 2001, attacks.

The United States was only interested in tactical cooperation, Suleimani warned at a meeting of Iran’s Supreme National Security Council. If something more emerged, “The dreams of you Westoxificated diplomats would come true,” and if not, the two sides would still have eliminated one of Iran’s worst enemies, he said. If the United States decided to betray Iran afterward, the Quds Force leader warned, the Americans would become trapped like the Soviets before them and eventually leave Afghanistan in defeat.

Mousavian also quotes Hassan Rouhani, then national security adviser, now Iran’s president, using a Farsi expression after Iran helped overturn the Taliban only to be put on US President George W. Bush’s Axis of Evil: “As soon as their donkey passed the bridge [meaning, as soon as they got want they wanted] they will go back to their previous hostile position.”

The failure of the United States and Iran to improve relations despite cooperation over Afghanistan is a well-known missed opportunity. But Mousavian details others, including a mediation effort by then-German Chancellor Helmut Kohl while Mousavian was Iran’s ambassador to Germany in the 1990s.

The son of a wealthy carpet producer and trader from Kashan, a city south of Tehran famed for its beautiful rugs, Mousavian came to the United States in 1975 and studied engineering at Sacramento City College and Sacramento State University. Like many Iranian students in the United States at the time, he got swept up in protests against the Shah and joined the Muslim Students Association of Europe and America.

Mousavian quit school to go home and join the revolution and was asked to edit a leading English newspaper, Tehran Times, in 1981. He also worked as head of the parliament’s administration organization and as director-general of the West Europe department in the Foreign Ministry. From 1990-1997, Mousavian served as Iran’s ambassador to Germany and then moved to the National Security Council, where he advised Rouhani and became the spokesman for Iran’s nuclear negotiators with Europeans from 2003-2005. After refusing then-President Mahmoud Ahmadinejad’s offer to become foreign minister in 2005, Mousavian continued to advise Rouhani’s successor, Ali Larijani, but fell afoul of Ahmadinejad in 2007 and was accused of spying for the West. Mousavian was freed after spending 10 days in solitary confinement but decided to leave Iran following the disputed 2009 presidential elections that sparked Iran’s biggest internal protests since the revolution.

A trusted confidant of former presidents Akhbar Hashemi Rafsanjani and Mohammad Khatami, Mousavian was tasked with some extremely sensitive missions.

According to Mousavian, Kohl was a facilitator with US Presidents George H.W. Bush and Bill Clinton in the 1990s but failed to make headway because of Israeli opposition to US-Iran rapprochement and terrorist incidents blamed on the Islamic Republic. Israel, no longer so concerned about Iraq after the 1991 Gulf war, had turned its attention to Iran’s then-fledgling nuclear program and Iran’s support of Palestinian groups that carried out terrorist attacks against Israelis. The United States, influenced by Israel and its supporters in Congress, blocked most trade with and investment in Iran in 1995.

Mousavian was also dispatched by Rafsanjani to try to patch up relations with Saudi Arabia. Mousavian, accompanied by Mehdi Hashemi, one of Rafsanjani’s sons, went first to Casablanca to meet with then-Crown Prince Abdullah and later to Jiddah. After they successfully negotiated a security agreement, Abdullah called Mousavian by his first name and noted that as a Seyed, “'You are a Hashemite, you are a son of the Prophet.'” He asked Mousavian to buy a piece of land for him in Iran on the Caspian Sea. “'I will build a palace there. I will also marry a Shirazi' girl,” Mousavian quotes the future Saudi king as saying.

While Iranian-Saudi relations improved following this visit, a new crisis emerged over the 1996 Khobar Towers bombing, which killed 19 American airmen. The FBI blamed the bombing on Iran-backed Saudi Shiites, but Mousavian asserts that al-Qaeda was the more likely culprit.

Indeed, Mousavian tries to refute or at least raise doubts about whether Iran was responsible for multiple cases of terrorism that have been linked to Tehran, including the assassinations of Iranian dissidents in Europe in the early '90s, suicide bombings in Israel in the mid-'90s and an alleged plot to murder the Saudi ambassador in Washington in 2011. He argues that these attacks derailed major Iranian diplomatic initiatives at the time and thus so made no sense for Iran to have been behind. While it is plausible that some of these cases were “false flag” operations backed by Israel, the Mujahedeen-e-Khalq or Saudi Arabia, as Mousavian suggests, his argument does not take into account the possibility that hard-line spoilers within Iran might have sought precisely such negative outcomes and could use similar tactics in the future if current nuclear negotiations look likely to succeed.

Mousavian’s fortunes fell during Ahmadinejad's presidency and he is both merciless and amusing in describing the former president’s diplomatic ignorance — such as his belief that the United States was only bluffing when it threatened to refer Iran to the UN Security Council if it resumed its uranium-enrichment program. Mousavian also asserts that Ahmadinejad tried multiple times to cut a deal with the United States — primarily by using his in-law and chief aide, Esfandiar Rahim Mashaei, as a back channel — without recognizing that his belligerent and ill-informed rhetoric about Israel, the Holocaust and the Sept. 11 attacks left any chances for US-Iran rapprochement virtually nil.

Despite all the frustrations he has experienced as a diplomat, Mousavian, who has been living in Princeton, N.J., for the past five years, is still optimistic that the 35-year divide between the United States and Iran can be bridged. But if current negotiations are to succeed, he argues, the United States has to have a better understanding of Iranian psychology and substitute genuine outreach for pressure and threats.

While “The road to peace between Iran and the US is truly a bumpy one,” détente, if not reconciliation, is not impossible, he writes. “I am confident that the dominant viewpoint inside [the system], including that of the supreme leader, is to end the hostilities with the US based on mutual respect, noninterference and mutual interest.”