Among President Obama’s many challenges in the Middle East, the Iranian nuclear file stands the greatest chance to achieve a swift resolution, according to Iran's former nuclear negotiator. 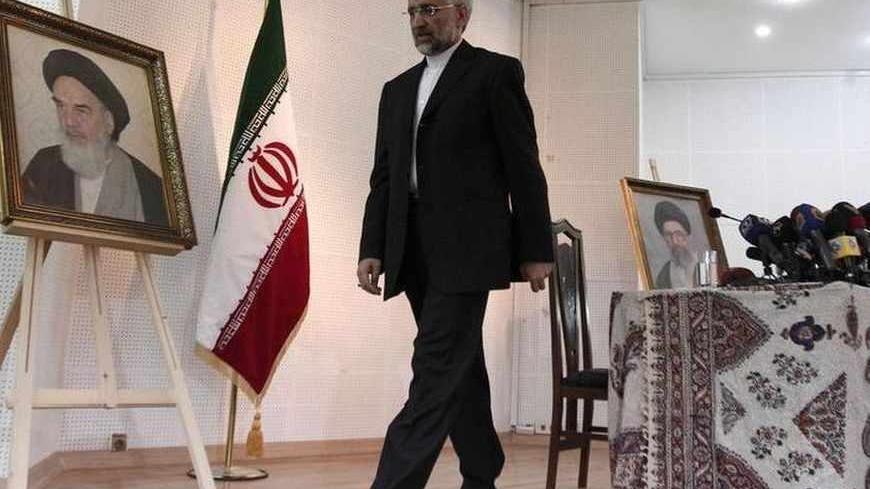 Iran's chief negotiator Saeed Jalili leaves after his news conference at the Iranian Consulate in Istanbul, May 16, 2013. Iran is prepared to pursue nuclear diplomacy with world powers before or after next month's presidential election in the Islamic Republic, its chief negotiator said on Thursday. - REUTERS/Osman Orsal

In his latest statement, Israeli Prime Minister Benjamin Netanyahu described Mahmoud Ahmadinejad as a “wolf in wolf's clothing” and claimed new Iranian President-elect Hassan Rouhani is a “wolf in sheep's clothing. Smile and build a bomb.” He then proposed to the United States that "if sanctions don't work, they have to know that you'll be prepared to take military action — that's the only thing that will get their attention.”

In reaction to the Iranians electing a moderate president, Rouhani, almost all the 46 members of the US House Committee on Foreign Affairs, in a letter addressed to President Barack Obama, called on the White House to intensify pressure on Iran to dismantle its nuclear program. Moreover, a US official revealed that Washington has assured Tel Aviv that despite the victory of a moderate president in the Iranian election, the United States intends to increase sanctions and pressures on Iran.

On July 21, while Ayatollah Khamenei reiterated on Iran’s reediness for “engagement,” expressed his skepticism about talks with the United States. “The stance of American officials over past months once again confirms that one should not be optimistic," he told the officials.

In 2005, a comment by Ahmadinejad, repeated often and interpreted by many as calling for Israel to be “wiped off the map” was manipulated by Netanyahu to press the international community to expedite the referral of Iran’s nuclear file to UN Security Council, paving the way for comprehensive sanctions. While Ahmadinejad’s statement about Israel was both mistranslated and misinterpreted, there is no dispute surrounding the repercussions. Years after Ahmadinejad’s comments, in April 2012, Israeli Deputy Prime Minister Dan Meridor acknowledged that Iran’s president never actually said that Israel “must be wiped off the map.”

To achieve such objectives, Israel has repeatedly claimed Iran is on the verge of a nuclear weapon since early 1990s. The following is a partial list of Israel crying wolf. In October 1992, then-Foreign Minister Shimon Peres warned the international community that Iran would be armed with a nuclear bomb by 1999. In July 2001, Defense Minister Binyamin Ben-Eliezer confirmed that by the year 2005 Iran would have a nuclear bomb. In February 2009, Netanyahu told an American congressional delegation that Iran is only one or two years away from nuclear weapons. In September 2012, Netanyahu argued, Iran could have a nuclear bomb by mid-2013 and, just in July 2013, he again warned that Iran was only weeks away from crossing the "red line" on developing a nuclear weapon.

This trend would undoubtedly continue since the Israeli strategy is to use the Iranian nuclear issue as a tool to threaten for a military strike, leaving no other option for the EU and US to either choose “war” or “coercion.” Knowing very well that the preferred choice is coercion and this would be enough to prevent a realistic solution to Iran’s nuclear program. Netanyahu has been able to court the US and EU by demonstrating a “credible threat” to achieve coercion policy against Iran, derailing the nuclear negotiations from its main objective.

With Rouhani elected as the new president of Iran, there is renewed hope of reaching a face-saving solution on the nuclear issue. Netanyahu also presupposes a possibility for a modified US approach at the P5+1 negotiations, which could facilitate a peaceful resolution. His aim is to prevent such a breakthrough from happening by discrediting Rouhani and falsely portraying him as a “wolf in sheep's skin.”

This strategy, advocated by Netanyahu and the US Congress, calls for increased pessimism on the prospect for a negotiated settlement. Making matters worse is the improbability that the US Congress would permit significant lifting of sanctions, even if by some miracle the US administration were to make a deal with Iran. There is, however, some glimmer of hope recently with 29 prominent former government officials, diplomats, military officers and national security experts telling the White House that "diplomacy will only succeed if we are prepared to leverage existing sanctions and other incentives in exchange for reciprocal Iranian concessions," adding, "in the lead up to Rouhani’s inauguration, it is critical that all parties abstain from provocative actions that could imperil this diplomatic opportunity." More promising is that some 120 US House members signed a bipartisan letter calling on Obama to advance opportunities for a diplomatic resolution with Iran in the wake of Rouhani's election last month.

Obama is facing a daunting task maneuvering US foreign policy in the Middle East, with the crisis in Syria, Iraq and the stagnant Israeli-Palestinian peace process. Among all these challenges, the Iranian nuclear file has the greatest chance to achieve a swift resolution. The nuclear talks from 2003 to 2005 with UK, France and Germany, with Rouhani as the top Iranian nuclear negotiator, demonstrated far-reaching overtures to resolve the nuclear dispute. Iran implemented the maximum level of transparency a member-state of the Treaty on the Non-Proliferation of Nuclear Weapons (NPT) can commit to by accepting the Additional Protocol and Subsidiary Arrangement. Rouhani also demonstrated Iran’s readiness to commit to all confidence-building measures, assuring the peaceful nature of the nuclear program — forever.

Regrettably, Iran and its European counterparts failed to reach a final agreement because President George W. Bush continued to deny the legitimate rights of Iran under the NPT, altering the balance of forces in Iran toward those in favor of radicalism. Once again, with President-elect Rouhani, there is a golden opportunity for the US to reinvigorate diplomatic efforts to resolve the standoff over Iran’s nuclear program.

Netanyahu needs to know that Rouhani is neither wolf nor sheep. He is a pragmatic politician who has already proved his sincerity to realize a peaceful, sustainable and realistic solution to the nuclear dilemma. The US should not miss or dismiss this unique opportunity. President Obama should be brave and invest political capital to pursue a direct and broad deal with Iran and end over three decades of hostilities. Such historical achievements require Netanyahu to recognize a fact: US-Iran rapprochement is the only way to decrease tensions between Tehran and Tel Aviv.

Seyed Hossein Mousavian, a former Iranian ambassador and spokesman for Iran’s nuclear negotiators, is a research scholar at Princeton’s Woodrow Wilson School. His latest book is The Iranian Nuclear Crisis: A Memoir, published by Carnegie Endowment for International Peace.