Progress in nuclear negotiations with Iran will have positive consequences for other regional security issues. 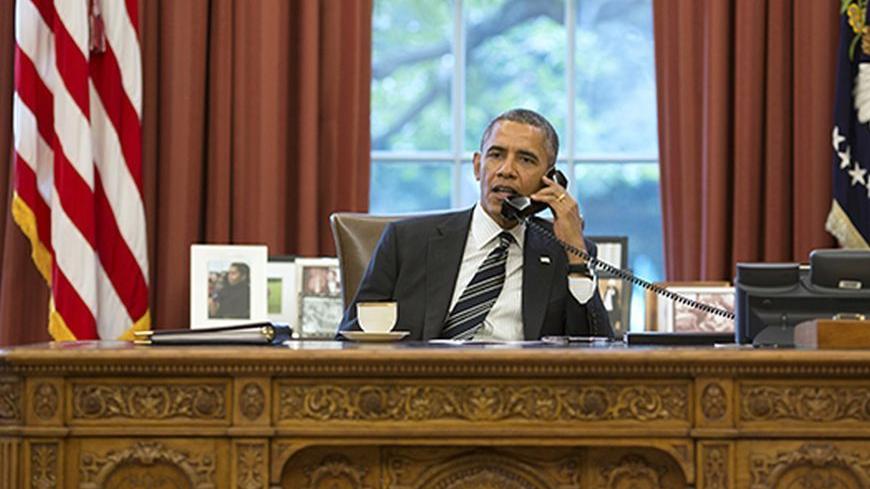 US President Barack Obama talks with Iranian President Hassan Rouhani during a phone call in the Oval Office at the White House in Washington, Sept. 27, 2013. - REUTERS/Pete Souza/The White House

US-Iranian relations are, finally, at a turning point. For years, through hundreds of lectures and articles, I have elaborated on the necessity for the United States to end its regime change policy and avoid using the language of threats and humiliation toward Iran. The emphasis should instead be on detailing a “grand agenda” to revive bilateral relations based on mutual respect and interests. On the nuclear file, a peaceful resolution would be based within the framework of the nuclear Non-Proliferation Treaty (NPT) and operationalizing the religious fatwa issued by Iran's supreme leader, Ayatollah Ali Khamenei, banning the production, stockpiling and use of all weapons of mass destruction, including nuclear weapons.

Presidents Barack Obama and Hassan Rouhani missed the opportunity to meet for bilateral talks and a photo-op on Sept. 25 on the sidelines of the UN General Assembly gathering in New York. Scheduling issues and insufficient time for a substantive outcome were the reasons cited. This setback was short-lived, however, as it was followed by a phone conversation between the two presidents and direct talks between Foreign Minister Mohammad Javad Zarif and Secretary of State John Kerry. These two events were unprecedented in the history of the marred relations between the United States and Iran since the 1979 revolution. The political maturity and braveness of both presidents demonstrate their willingness to end more than three decades of hostilities.

Both historical events could have major implications not only for a US-Iranian rapprochement, but also peace and stability in the Middle East. Having worked on relations between Iran and the West for more than a quarter century, there is no doubt that President Obama’s Sept. 24 address at the UN General Assembly was the most positive statement on Iran made by a US head of state since 1979. It was the first time a US president did not threaten Iran, recognized that tens of thousands of Iranians had been poisoned by Saddam Hussein in his invasion of Iran and the 1980–88 war and acknowledged certain historical reasons for deep-rooted Iranian mistrust for America, in particular its role in overthrowing the Mossadegh government during the Cold War.

On bilateral issues, Obama proposed reviving relations with Iran based on principles of mutual interest and respect, clearly distancing himself from the traditional US policy of regime change. There were also conciliatory statements on the nuclear issue, with Obama recognizing the right of the Iranian people to peaceful nuclear energy and Khamenei’s fatwa against the development of nuclear weapons. He then took the bold step of extending a personal mandate to Secretary Kerry to resolve the nuclear issue and carve out a new relationship with Iran that “will be good for the region and the world.”

Rouhani skillfully recognized the major shift in Washington's position and embraced Obama’s historical overture by stating, “We can arrive at a framework to manage our differences.” This was a clear signal that Iran stands ready to improve bilateral ties with the United States.

The key issue for both parties now is whether the other side can deliver a deal or whether it will be impeded in their respective capitals. During President Mohammad Khatami’s nuclear talks with the United Kingdom, France and Germany from 2003 to 2005 — when Rouhani led Iran’s negotiating team — Tehran made far-reaching overtures to resolve the nuclear dispute. Iran implemented the maximum level of transparency for an NPT member-state by accepting the Additional Protocol and Subsidiary Arrangement. It also demonstrated its readiness to commit to confidence-building measures, assuring the peaceful nature of the nuclear program, forever.

The ultimate decision maker, the supreme leader, supported the president and his negotiating team on the issues of transparency and confidence-building measures. Regrettably, Iran and its European counterparts failed to reach a final agreement because the United States continued to deny the legitimate rights of Iran under the NPT. “We were getting somewhere, with respect, and then it’s a complicated story. The Americans actually pulled the rug from under Khatami’s feet, and the Americans got what they didn’t want,” former British foreign minister Jack Straw told the BBC in July 2013.

The moment has arrived for both capitals to take bold and practical action to secure a breakthrough. They need to ensure the goodwill of both presidents will be practically and properly acted upon. Having intimate knowledge of Iranian foreign policy, I am confident the Iranian leadership will be united and is capable of delivering the maximum level of transparency and implementing confidence-building measures to assure the international community that Iran will be a “permanent nuclear-weapons-free country.” The question that remains, however, is whether Obama can persuade a skeptical Congress to recognize the rights of Iran under the NPT, avoid further sanctions and, eventually, in the context of an agreement, lift sanctions on Iran.

Although the nuclear issue has priority in Kerry and Zarif's mandates, the foreign ministers should also discuss other critical issues, such as Syria, Iraq, Afghanistan and extremism in the region. The key to success is to discuss areas of dispute while pressing ahead with practical measures on areas of mutual interest. During my tenure as Iranian ambassador to Germany, Chancellor Helmut Kohl and President Akbar Hashemi Rafsanjani held periodic phone conversations that had positive impacts on bilateral, regional and international issues. The Middle East is in turmoil and on the verge of regionwide sectarian and civil war. The United States, as a major international player, and Iran, as a major regional player, have historical responsibilities to bring about peace, stability and security to the Middle East and beyond.

Obama and Rouhani have the capacity for much-needed cooperation. They both must stay firm and focused, concentrating on creating the context for positive negotiations. Obama stating on Sept. 30 that “we take no options off the table, including military options” was poorly received in Tehran and raised unfortunate questions about the United States' good faith in negotiating. The two presidents should have periodic phone conversations and approve routine meetings of their foreign ministers to consult on bilateral, regional and international issues. They must also recognize the necessity of engaging the other regional and international players, including Europe, Russia, China, India, Japan, Turkey, Saudi Arabia, Iraq and Egypt. In the process, it is imperative that they avoid the traps and negativity of the skeptics, in the United States, Iran and elsewhere, who remain stuck in the old thinking — full of distrust and recrimination and still invested in hostility and confrontation — and would therefore miss the opportunity presented to resolve the nuclear issue.

The latest developments in US-Iranian relations will positively affect bilateral relations, but the limelight should not be allowed to overshadow other critical issues. The current bandwidth devoted to US-Iranian relations, particularly by the Iranian Foreign Ministry and other organs of the Rouhani administration should be balanced with sustained engagement with key regional countries and the broader international community. This would help ensure that Iran makes headway on multiple fronts, each contributing to the further strengthening of relations and helping resolve major national, regional and international issues.